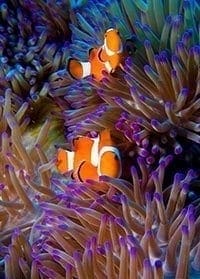 David, Dr. Wood and I recently returned from MarineBio’s expedition to Indonesia where we spent two weeks in the Lembeh Strait and the Bunaken National Marine Park shooting underwater photos and video for MarineBio. We’re slowly getting over our jet lag and adjusting to life on terra firma again – not an easy thing after two weeks of nonstop diving in one of the most biodiverse underwater regions in the world.

Overall, the expedition went well and we came back with around 2,000 photos and several hours of video. We were surprised that the visibility in Bunaken only averaged about 40 feet and are trying to figure out why we didn’t see the 100 foot+ visibility we expected. There was quite a bit of plastic and other debris in the water; we’re hoping that it’s not pollution that’s causing the legendary clear waters of Bunaken to cloud, but the small particles in the water looked more like fibers than plankton. In spite of the low viz, the diving was still pretty spectacular and we saw lots of cool critters, particularly during our time in the muck diving capitol of the world – Lembeh Strait.

We met up with our Director of Invertebrates, Dr. James B. Wood, in Lembeh who surprised us at the airport when we arrived. Dr. Wood managed to overcome both having the flu and technical difficulties with his underwater photo equipment and got some great photos of his beloved cephalopods along with lots of photos of other critters, including the elusive mating Mandarinfish. It was great to have some face time with James for a change and we thoroughly enjoyed diving and hanging out with him.

The dive guides in Lembeh were amazing. One of them, Opo, who’s been diving the area for 18 years, is quickly becoming legendary for his ability to spot the highly camouflaged creatures that hide in the “muck” (which is actually just dark volcanic sand). On several occasions he would point something out that was right in front of my face and I still couldn’t see it! Then slowly a frogfish, ghost pipefish, demon stinger, cuttlefish, or other camo’d creature would appear. At times the animals weren’t camouflaged at all and suddenly in the gloom you’d see a brilliantly colored nudibranch or sparkling urchin. Opo’s enthusiasm and joy at watching our faces as we discovered the crazy creatures made our experience in Lembeh unforgettable. Both the day and night dives were spectacular in Lembeh. Often we would spend the first 30 minutes of the dive wondering whether we’d see anything but the “muck” and then suddenly creature after creature would appear. This happened on almost every night dive, which made them all the more fun and exciting. Our time was too short in Lembeh, but after 4 days of diving there it was time to transfer to Bunaken.

The coral diversity in Bunaken was nothing short of spectacular. And the critters were amazing as well…. A few blacktip sharks, enormous green sea turtles, tons of brightly colored reef fish, black and white banded sea snakes, mating mandarin fish… etc etc. A huge variety of anemonefish – i.e. LOTS of Nemos who were very protective of their homes. As friendly as Nemo seems, in reality they don’t like big critters (humans) near their anemones! One bit me (it was so cute though) and another bit the edge of David’s shorts and tried to tug him away. Too funny.

Stay tuned to MarineBio.org in the next few weeks for a more details on the expedition including photo and video galleries. We have lots of work to do to pare down the hundreds of photos and hours of video, but I think you’ll agree that the species we “captured” will be well worth it!