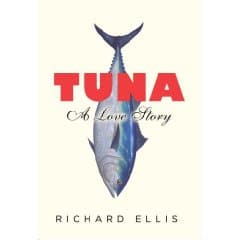 Richard Ellis’ new book Tuna: A Love Story is now in bookstores. In his latest book, Ellis focuses on the bluefin tuna – an amazing species that is being loved to death in sushi bars worldwide.

We’re fans of Ellis’ The Empty Ocean, which paints a grim but accurate view of the exploitation of the ocean through centuries of fishing. The book is filled with historical data on overfishing and includes Ellis’ wonderful illustrations of marine life.

I’m hoping Tuna includes his drawings as well. I haven’t read it yet, but I plan to in the next few weeks and will provide a more in depth review. In the meantime:

Ellis (The Book of Sharks) covers everything one could want to know about the biggest, fastest, warmest-blooded, warmest-bodied fish in the world, describing the various species of tuna and giving a thorough account of the history of recreational and commercial tuna fishing. The bluefin tuna—on the brink of extinction—receives the most attention, and Ellis contends that the Japanese fondness for tuna sashimi—and Japanese willingness to violate fishing restrictions—is largely to blame. Tuna farms, where bluefin are fattened, were once thought to be the answer, but Ellis argues that they are contributing to the problem as young tuna do not have time to breed and replenish the stock in the ocean; the fish fed to the bluefin are themselves being overfished; and waste from the pens causes pollution. Ellis presents an overload of information—too many facts and figures on weights, measurements and numbers of fish caught and sold—however, his impassioned message comes through clearly: someone must figure out how to breed the bluefin in captivity, because as things stand now, it will not survive in the ocean.

Tuna is the most popular food fish in the world. It is eaten raw, cooked, in sandwiches, in salads, and in cat food.

In the past, tuna fishermen in the eastern tropical Pacific set their nets around dolphins, which resulted in the deaths of tens of millions of dolphins.

There are many kinds of tuna, but the most popular for the Japanese sashimi market is the bluefin, one of the largest of all fishes.

The most expensive bluefin tuna was a 440-pounder that sold at the Tsukiji fish market in Tokyo for $173,600.

Almost all of the bluefin tuna caught by commercial fishermen goes to Japan.

At the Tsukiji fish market in Tokyo, an estimated 1,000 bluefin tunas are auctioned off every day.

Is there mercury in tuna? Yes. Is it at levels dangerous to humans? Not unless you eat tuna three meals a day.

Many scientists consider the tuna the most highly-evolved fish in the world.

Bluefin tunas, along with mako and great white sharks, are the only “warm-blooded” fishes; they can elevate their body temperature as much as 25 degrees above the water they swim in. This makes them particularly effective as predators.

Bluefin tuna can swim 55 miles an hour. They can migrate across the Pacific and Atlantic Oceans, then turn around and do it again.

MIT scientists built a robot tuna in an attempt to replicate the incredibly efficient swimming performance of the living fish. They failed.

The bluefin tuna, and to a lesser extent, the yellowfin, are among the most sought-after of big-game fishes.

Tuna ranching now takes place in every country on and in the Mediterranean, and in Australia and Mexico as well. It is scheduled to begin in Hawaii and Alaska.

Because of commercial overfishing, almost exclusively to feed the insatiable Japanese sashimi market, all populations of bluefin tuna are endangered.

Overfishing in the Mediterranean has caused such a drop in the bluefin tuna population that the World Wildlife Fund has called for a complete halt to all tuna-fishing there.

If we cannot learn to breed bluefin tuna in captivity, the great fish will become extinct, writing finis to commercial and recreational tuna fishing–and to the consumption of maguro sashimi in Japan.

In March, 2008, an Australian company called “Clean Seas” succeeded in getting captive bluefin tuna to spawn. If they can raise them to market size (200-300 pounds), it may relieve the pressure on wild-caught fish.