This story proves how we’ve only scratched the surface of what we know about marine life….

Some animals are classified as “intelligent” if they use tools right? What about fish? It is known that some fish use tools to crush the shells of their prey but it is not well documented in photos. Recently a diver on the Great Barrier Reef managed to photograph a tuskfish using a rock as an anvil to smash a clam shell open. 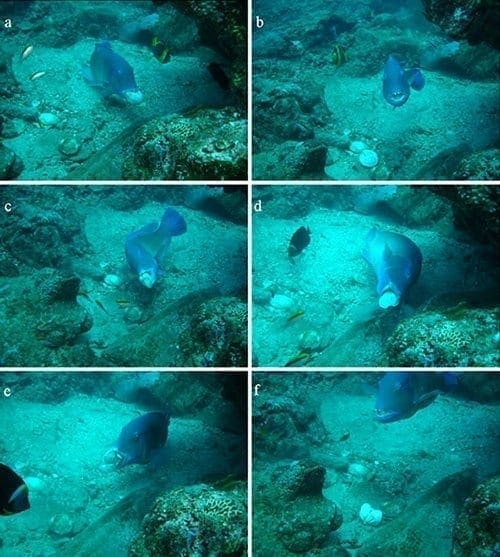 Fig. 1 a–f: Series of six photographs of a black spot tuskfish, Choerodon schoenleinii using a rock as an anvil to open a cockle shell. The photographs span 75 s and were taken while on a dive in the Keppel Islands region of the southern Great Barrier Reef in Queensland, Australia. Broken shells are seen lying on the sand near the rock.

Jane Goodall describes tool use as the use of an external object as a functional extension of mouth or hand in the attainment of an immediate goal (van Lawick-Goodall 1970). Tool use is often observed in a foraging context in a wide range of species, and complex feeding behaviors are not uncommon among marine fishes. For instance, wrasses crunch sea urchins against corals and use anvils to smash food into more manageable pieces (Pas´ko 2010, reviewed in Brown et al. 2006). In spite of the anecdotal evidence for the use of tools in marine fishes, there are few documented cases, particularly those based on observations in the wild. Here, we present evidence of a black spot tuskfish, Choerodon schoenleinii, Valenciennes, 1839 using a rock as an anvil to open a cockleshell that conforms to Goodall’s definition of tool use.

On 12 November 2006, S. Gardner was returning from an 18-m dive in the Keppel region of the southern Great Barrier Reef (–23.199S, 151.099E) when he heard a cracking noise and saw a tuskfish hovering just above a sand patch near a rock grasping a cockle in its mouth. The photographs span 75 s and show the fish grasping the shell in its jaws and rolling onto its side to land alternate blows on the rock until the shell fractured (Fig. 1a–f). The use of a rock as an anvil rather than a hammer could be considered a sign of intelligence considering the ineffectiveness of manipulating a freely suspended tool in water. The images certainly provide an interesting starting point for further comparative studies on tool use in fishes.