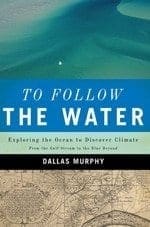 I just attended a talk given by the author (Melissa Faye Green) of a book that describes the unbelievably tragic AIDS orphan situation in Africa. And I left inspired. What?! Yes, inspired – the author vividly paints a picture of what’s become a dire situation in a way that incorporates humor and hope. This kind of writing is rare and wonderful. Our favorite Carl Safina who wrote Song for the Blue Ocean is capable of the same writing style. As a writer, interacting with authors who have this unique skill puts stars in my eyes – and hopefully ideas in my brain so that one day my writing will become as evocative and compelling.

I was recently contacted by Dallas Murphy, the author of a new book To Follow the Water that describes the ocean’s relationship to global warming. Though I haven’t had time to read it cover to cover yet, I can already see that Mr. Murphy also has that wonderful way of making a serious topic enjoyable to read about and accessible to many. In his email to me he said:

I would like to tell you of my new book To Follow the Water about the ocean’s role in determining climate. Aimed at general nonfiction readers, part of the book’s theme is that oceans have been more or less left out of the discussion about climate change; yet climate, itself is an inextricable union between ocean and atmosphere. I explain from an historical perspective the discovery of ocean dynamics by oceanographers (Ekman, Sverdrup, Stommel, Munk) and of the elemental forces (wind, Coriolis, density differences) that cause oceans to circulate.

Then, to accommodate the present, I take the reader to sea aboard three oceanographic expeditions, one conducted by WHOI and two aboard the NOAA Ship Ronald H. Brown. Unbeknownst to most people outside the professional community, oceanography has recently made a huge stride: Scientists, as of course you know, have learned enough about the ways and means of ocean circulation and its role in the formation of climate to employ their oceanographic techniques to predict climate change. In that sense, my point is, oceanography has “come ashore,” its practitioners interests and ours intersecting around the climate we all share.

Another theme of the book is that we, the public, ought to learn how to talk with scientists. Only from them can we learn anything real about climate and climate change, yet for various reasons, which I explore, the dialogue is stalled….

I’m going to do something I rarely do and recommend this book to you before I read it cover to cover. A full review will be included in the upcoming newsletter, but I encourage you to check out the book before then.