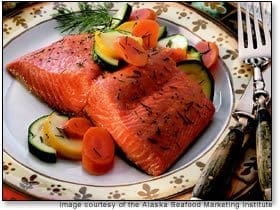 A tale of two categories — good seafood choices, bad seafood choices. Ok, so I’m no Dickens, but I can help share good resources to remind us how to make healthy and environmentally responsible seafood choices like the appetizing wild Alaskan salmon in the photo.

The Environmental Defense puts out a handy seafood selector that can be printed and toted around in your wallet for those times when you’re uncertain whether your menu selection is a good one. Not as in “tastes good” — as in is a healthy choice for you and doesn’t contain unhealthy contaminants like mercury, and a healthy choice for the marine environment in that it’s a seafood species that can be fished sustainably.

Best fish choices are not only raised or caught in environmentally-sound ways, but that are also high in omega-3 fatty acids and low in environmental contaminants (like mercury and PCBs).

Worst fish choices should be avoided, even though some may be high in omega-3’s, because of their negative impact on the environment or high contamination levels.

How does Environmental Defense distinguish good choices from bad choices? Well, according to the information on their website, very carefully. And based on a number of criteria:

How We Come Up With Our Eco-Ratings
How does Environmental Defense decide which fish merit an Eco-Best or Eco-Worst rating? Our Oceans scientists evaluate many aspects of capture fisheries and aquaculture operations for their analyses of the more than 200 species of fish and shellfish featured on the Seafood Selector.

Eco-Best picks represent fish whose fishing or farming methods have minor impacts on the environment, and Eco-Worst are those that have considerable impacts on the environment. As fishing and farming practices change over time and information becomes becomes available, we reevaluate our rankings. Our guide is produced in collaboration with the Monterrey Bay Aquarium, another producer of seafood eco-guides.

Below are some of the issues we consider for each species.

The basic biology of a species is a good indicator for how it will respond to fishing pressure. Fish that grow quickly, reproduce at an early age, and have short life spans are more resilient and are less likely to be overfished (e.g. mahi mahi). Conversely, fish that reach sexual maturity at a late age and are long-lived are more susceptible to population decline as a result of fishing pressure (e.g. Pacific rockfish). Special behaviors, unique reproductive traits, restricted ranges and natural population variability are additional factors we consider. Abundance Population size is another good indicator of a fishery’s status, which is usually measured in relation to the biomass corresponding to maximum sustainable yield (BMSY). Populations well below 100 percent BMSY are usually overfished, whereas those well over 100 percent BMSY are often sufficiently abundant to maintain or increase the long-term productivity of the fishery. Changes in population size, skewed age or sex ratios, and species with internationally recognized designations such as “threatened” or “endangered” are additional factors that we consider.

Types of fishing gear vary considerably in their impact on habitats. Bottom trawling and dredging are examples of fishing methods that can cause great damage to the bottom. Gear such as purse seines, handlines and pelagic longlines have little or no habitat impacts (although bycatch tends to be high with pelagic longlines). Habitat recovery time, protection of critical areas, fishing gear innovations, and non-fishery habitat impacts (e.g. pollution, coastal development) are also considered.

Effective management addresses many of the considerations listed above, and therefore is essential to ensuring healthy fisheries (see case study below). Unregulated fisheries, or those with ineffective management, are susceptible to overfishing and ecosystem damage. Examples of fisheries with poor management include Chilean seabass, which is fished illegally over a large portion of its range. Other considerations include overcapitalization (too many boats), population monitoring, and innovative management solutions (e.g. marine protected areas).

The environmental impacts of aquaculture production are linked to the types of systems used to grow fish. For example, systems that are open to the environment (e.g. netpens) are usually associated with the greatest environmental harm (see case study below). Conversely, closed systems (e.g. recirculating tanks) do less harm and can be totally benign. Since many species are raised by only one type of operation, system design is a good indicator for overall impact. Other factors that we consider are stocking density, siting practices, government policies and technological innovation.

Some species of farm-raised fish are carnivorous and therefore require fishmeal and fish oil in their feed. Massive quantities of small, oily fish like anchovies, menhaden, mackerel and herring are caught to produce fishmeal and oil for feed, and feeds for carnivorous fish like salmon and trout can contain upwards of 70 percent fish products. The upshot is that production of these fish requires catching more pounds of wild fish than are ultimately produced by farming them. On the other hand, omnivorous and herbivorous fish like catfish, tilapia and carp need relatively small amounts of fish products in their feed. Farmed mollusks (clams, mussels, oysters and scallops) require no feed at all, since they filter their food from the surrounding water. We also consider additional factors like feed conversion ratios (how efficiently a species converts feed to flesh), government policies and technological innovations in feed composition or efficiency.

Aquaculture operations vary in the amount of effluent (wastewater) they produce, and in the treatment of that effluent. Open systems like netpens produce large amounts of untreated waste and uneaten feed. These nutrients pass directly into surrounding waters, where they can significantly impact local ecosystems. Ponds (used to raise U.S. catfish and most shrimp) and recirculating systems (used for some finfish and shrimp production) are better able to control and treat effluents. Effluent treatment options such as settling ponds and constructed wetlands can be used to reduce water pollution from ponds and other types of fish farms. We also take into account government policies, technological innovations, and the discharge of chemicals (e.g. parasiticides, antibiotics).

Risk to Other Species

Farmed fish, if they escape, can pose serious threats to wild fish populations by competing with them for habitat, interbreeding and transmitting disease and parasites. Fish are most likely to escape from open systems such as salmon netpens since they are directly in surrounding waters. Farming native species, or raising fish in tanks, generally minimizes the possibility of escaped fish affecting native fish populations.

Abundance – Pacific halibut populations are steady or increasing in most management areas. Gear impacts -– The predominant fishing gear used to catch Pacific halibut is bottom longlines. This is a fixed gear (it is not dragged) that has relatively little impact on bottom habitats.

Bycatch – This gear type also results in inherently low bycatch rates for the Pacific halibut fishery. In addition, allowable bycatch is strictly regulated through a new management plan (see below), which was implemented at the request of fishers in Alaska and Canada. Bird deterrent measures (e.g. fluorescent streamers and mandatory bait disposal techniques) minimize bycatch of albatross and other seabird species.

Management – The Pacific halibut fishery was converted from a ‘derby’ style fishery to an Individual Fishing Quota (IFQ) system in 1995. Under this innovative market-based approach, individuals (in the U.S.) and vessel owners (in Canada) are allowed to buy quota shares of the total allowable catch (TAC), based on previous years’ landings. Fishers buying into this system ultimately invest in the conservation (and future health) of the fishery.

Pollution – Typical salmon farming operations contribute to coastal water pollution. Fish wastes and uneaten feed can contribute to nutrient loading, which in some areas has led to algal blooms, or other water quality problems. The accumulation of wastes beneath net pens can significantly damage marine life on the sea floor.

Antibiotic/chemical use – A variety of chemicals are used in salmon farming, often including antibiotics, pesticides and parasiticides. These drugs are generally administered in feed, and can disperse into the environment, potentially affecting other organisms. In addition, the regular use of antibiotics on some salmon farms can contribute to the spread of antibiotic resistance in pathogens that infect fish and humans.

Escapes/disease – Salmon escape from farms in small numbers through “leakage” and also in large numbers episodically due to storms or other causes of damage to netpens. Depending on where farms are located, escaped fish may compete with native fish for habitat, or breed with them – in the latter case making the native fish population less genetically adapted to the local environment. Escaped farmed salmon may also spread parasites and pathogens to wild fish.

Predator control – Salmon farming operations sometimes harass or even kill wildlife such as seals or birds in order to discourage them from feeding on farmed salmon.

Environmental contaminants – Recent studies show that most farmed salmon contain significantly higher levels of PCBs, dioxins and pesticides than wild salmon. These contaminants appear to originate in salmon feed. Fishmeal and crude fish oil in feed can contain relatively high levels of contaminants, depending on their source.