Alvin, the legendary research sub built by WHOI in 1964 and who allowed researchers to discover hydrothermal vent communities in 1977, is getting a major overhaul. Alvin allows researchers to conduct biological, chemical, geochemical, geological and geophysical studies while making 150 to 200 dives a year. Currently it can only reach depths of 4,500 meters (2.8 miles) and was planned for retirement until recently… 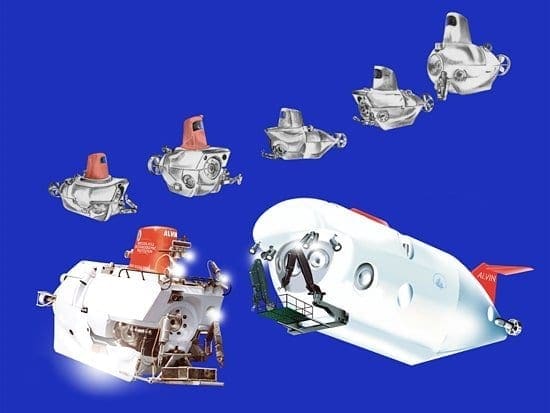 That would require descending to 6,500 meters, or more than 4 miles.

In the late 1990s, ocean scientists proposed a next-generation vehicle that could go deeper, spend more time on the bottom, have more interior room, and have more and bigger windows, or viewports.

In 2004, the National Science Foundation (NSF) agreed to the plan and awarded $21.6 million to Woods Hole Oceanographic Institution (WHOI), which manages the National Deep Submergence Facility (NDSF), a federally funded center that operates, maintains, and coordinates the use of deep-sea exploration vehicles, including Alvin, for the U.S. oceanographic community.

But initial estimates for design, construction, and testing of the new vehicle nearly doubled, and material costs soared. The cost of titanium to forge a new personnel sphere for the sub rose fivefold.

“As detailed planning progressed, it became clear that we couldn’t afford the full costs to implement the 6,500-meter, top-of-the-range vehicle in a single hit,” said Chris German, chief scientist for deep submergence at WHOI. “Consequently, we developed a new plan, still aiming to achieve the same endgame, but via a longer-term, two-phase approach.”

Continue the story at http://www.whoi.edu/oceanus/viewArticle.do?id=53066&sectionid=1000