You know that question “if you could choose 3 people, alive or dead, to have dinner with, who would you choose?” For me, the person who always springs to mind first is Dr. Sylvia Earle. She became one of my “dinner heroes” when I read her book Sea Change: A Message of the Oceans. Never judge a book by its cover? Well, I did — and it changed my life. The bright blue cover and the fish caught my eye as I passed a table at Barnes & Noble and I bought the book on impulse. I read it on vacation in the Florida panhandle and couldn’t put it down. I remember sitting on the beach in Destin reading until the sun went down absolutely shell-shocked (pun purely intentional) by the state of the ocean described by Dr. Earle. 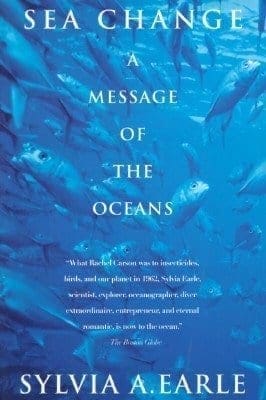 The book stirred so many emotions in me it was almost overwhelming. Anger and dismay that the oceans were being ravaged by overfishing and pollution. I, like many others, viewed the ocean as beautiful and magically invulnerable to damage. It’s so huge! So vast! Look — it’s so pretty! So many fish! And dolphins! The more I read and learned, the more I envisioned a gurgling stew of algae. Hypoxia. Drifting garbage. I was outraged, and scared. But then there were the parts of the book where Dr. Earle described her encounters with marine life and her evolution as one of the world’s leading ocean explorers if not THE leading ocean explorer and I felt joy and reverent admiration for her courage and determination. And that she did everything she did – and raised a family too. Superhero. And also — at the risk of gushing — she’s a poet with words. Wow. Oh — and that she was a woman in ocean exploration, which I imagine was very much a man’s world? I’m not worthy.

Most of all I was inspired. The impact of the book and of Sylvia Earle’s work, and words, and experiences motivated me to do something. But what could I do? I didn’t have a scientific education — unless you count political science. But the age of the Internet had arrived, so I began learning everything I could about marine conservation and ocean science.

Long story short, I poked around until I stumbled onto MarineBio and recognized it as a fantastic medium to spread the word. The ocean is amazing, mysterious, majestic, colorful, fascinating and sometimes even bizarre. But it’s in trouble. It’s not what it was when Dr. Earle first started exploring it. And at the current rate of devastation, it won’t be what it is today even 5 years from now. Sea Change scared me. Now, 14 years after being inspired to learn about the ocean’s problems, I’m terrified.

I’ve been teaching my 5-year old nephew about marine life since before he could talk. And he’s always been fascinated by my dive gear, particularly my “breathing tube” and mask. He can’t wait until he’s old enough to go diving with me. But that’s at least 7 years from now. Sure, we’ll go snorkeling; I hope Ryder will have the same fascination with the ocean as I do. We were playing with the marine life stencil on the Crayola Glow Station the other day and he told me he would love to see a shark when we go diving — preferably a hammerhead shark. He asked if I’d ever seen a shark underwater. Rarely I told him. Why? he asked. How could I tell him that there are so few left, finding them in the wild is a rare treat? And how could I not wonder whether, by the time he’s old enough to dive, there will be any left?

Disneynature emailed me to ask whether I’d be interested in a one-on-one phone interview with the legendary Dr. Earle who contributed to their breathtaking new film OCEANS. Would I be interested? She’s one of my heroes! The Sturgeon General? Her Deepness? And me? In a conversation? Heart pounding, I replied “an enthusiastic yes!” What I really wanted to say was are you serious? Is this a prank? April Fool’s was WEEKS ago… who is this? David? Are you jerking my chain? Am I dreaming? 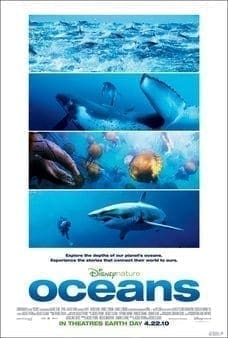 So tomorrow I will have 10 minutes with Dr. Earle. I can assure you it will be the shortest 10 minutes of my life. With the exception of the 10 minutes I spent in the water with whale sharks in Honduras. Or the 10 minutes I spent playing with a baby octopus in Lembeh Strait. OK, you get the point. Stay tuned….if I can manage to speak without sounding like a crazed groupie, I hope to come up with some intelligent questions. Which I will, of course, share with you.

In the meantime, check out this behind-the-scenes video about the making of OCEANS with Dr. Earle in the Earth Day post below. Or better yet, go see the movie!

And be sure to check out Dr. Earle’s latest book: The World is Blue: How our Fate and the Ocean are One.

There is time, though not a lot, to take action to stabilize and reverse the global decline of the natural ocean systems that keep us alive. Although humans pose grave danger to the health of the ocean, we also represent hope. ~ Sylvia Earle