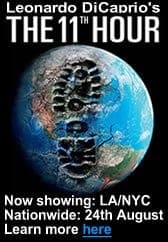 “The 11th Hour”, Leonardo DiCaprio’s film on the human impact on the environment opened nationwide Friday. I’ve been looking forward to this film and appreciate DiCaprio’s efforts to raise awareness on these issues. I also had the pleasure of meeting with one of the film’s participants, Nobel Laureate Wangari Maathai, and I worked on deforestation with her daughter during my career days at The Carter Center. Wangari is one of the most inspiring people I’ve ever met. She’s been fearlessly fighting for the environment and for human rights for decades in Kenya. She is the founder of The Greenbelt Movement, an organization responsible for planting more than 30 million trees across Kenya to preserve the environment and fight erosion.

“The 11th Hour” is a feature length documentary concerning the environmental crises caused by human actions and their impact on the planet. The 11th Hour documents the cumulative impact of these actions upon the planet’s life systems and calls for restorative action through a reshaping of human activity. DiCaprio states, “With the onset of global warming and other catastrophic events, environmentalism has become a broader unifying human issue. We as citizens, leaders, consumers and voters, have the opportunity to help integrate ecology into governmental policy and every day living standards.”

With the help of over fifty of the world’s most prominent thinkers and activists, including reformer Mikhail Gorbachev, physicist Stephen Hawking, and Nobel Prize winner Wangari Maathai, “The 11th Hour documents the grave problems facing the planet’s life systems. Global warming, deforestation, mass species extinction, and depletion of the oceans’ habitats are all addressed, and their causes rooted in human activity. The combination of these crises call into question the very future not of the planet, but of humanity.

However, the most powerful element of “The 11th Hour is not a portrait of a planet in crisis, but the offering of hope and solutions. Scientists and environmental advocates such as David Orr and Gloria Flora paint a portrait for a radically new and exciting future in which humanity seeks not to dominate the earth’s life systems, but to mimic them and coexist. “The 11th Hour calls for a future now within our grasp that is both sustainable and healthier.

The film was directed by sisters Leila Conners Petersen and Nadia Conners. They state, “We made this film as call to action, especially to young people. They are the ones who have the power to reshape the future. We must begin now.” They have established, watch The 11th Hour at youtube.com/watch?v=JxSIQoKe1Cg ($2.99), as a place for people to gather and effect change.