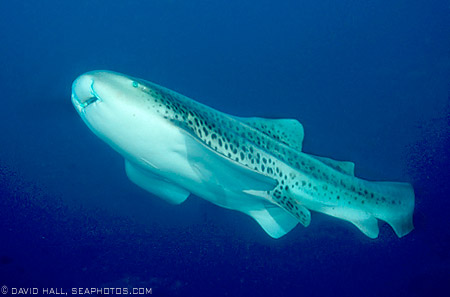 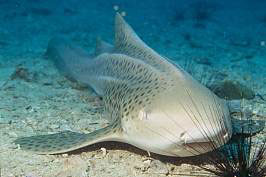 Zebra sharks, Stegostoma fasicatum (Hermann, 1783), are also known as leopard sharks in Southeast Asia. The zebra shark has a cylindrical body with prominent ridges on the sides and 5 gill slits (slits 4 and 5 overlap). The tail lacks a ventral lobe and it is as long as the body. This shark has a broad head, small barbels, and a transverse mouth located in front of the eyes. Its spiracles are as large as its eyes. The spineless dorsal fins are back to back. The anterior dorsal fin is much larger than the posterior dorsal fin. The first dorsal fin appears above the bases of pelvic fins, the second dorsal fin is about as large as the anal fin. The body is gray-brown with dark spots in adults. Juveniles are darker with light stripes and spots. Maximum size is about 3.5 m, average size between 2.5-3 m.

Zebra sharks, Stegostoma fasicatum, are found in the Indo-Western Pacific: South Africa to Red Sea and Pakistan, India, Sri Lanka, Bangladesh, Indonesia, Thailand, Vietnam, Philippines, China, Japan, Australia, New Caledonia, Palau. Lives over the continental and insular (island) shelves. Very common around coral reefs, often on sandy bottoms, but little is known about their biology. It is known that this species props itself up its pectorals in the sand and faces the current with open mouth. Such behavior and its inactivity during the day points towards a more sluggish lifestyle and indicates that it is probably a nocturnal hunter. Recorded to have entered freshwater.

They feed primarily on snails and other mollusks, but also on crabs, shrimps, and small bony fishes.

Zebra sharks are egg layers (oviparous). Egg cases are large (17 cm long, 8 cm wide, 5 cm thick). It is unknown if the female lays more than one egg at a time, but it is most likely. Pups hatch size is between 20-36 cm. Males reach sexual maturity between about 1.5-1.8 m, females around 1.7 m.

Harmless. This species is regularly taken in inshore fisheries and population decline is in progress. Utilized fresh and dried-salted for human consumption and also for fishmeal; livers processed for vitamins; fins cut off and sold for the Asian sharkfin trade.