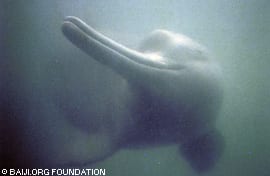 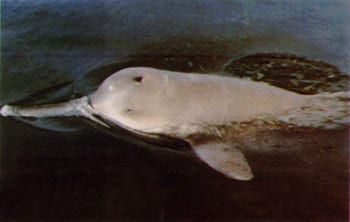 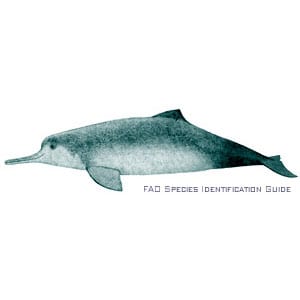 They are pale blue to gray in color on their dorsal (upper) sides, white on their ventral (under) sides. Their upward-curved beaks are long with 32-36 teeth on either side of their jaws. Their rostrum (beak/snout) is bowed slightly upward and their eyes are situated high on their heads. Unlike Amazon river dolphins, Yangtze river dolphins lack hairs on their beak and their blowhole is oval.

Yangtze river dolphins, L. vexillifer, are found in China from the mouth of the Chang Jiang (Yangtze) river and north about 1,900 km upriver. They are also found in the middle to lower regions of the Qiantang River. This is a gregarious species usually found in pairs larger groups of about 10 individuals.

Information on the reproductive behavior of the Yangtze river dolphin, Lipotes vexillifer, is scarce. It is known that they reach sexual maturity at 3-4 years of age. Mating season occurs in spring and autumn and their gestation period lasts between 6-12 months. Mothers keep their calves near after giving birth.

Yangtze river dolphins are one of the most highly endangered species in the cetacean family with an estimated population between 60-250 animals though recent surveys have not found a single individual. Threats to their survival include blockage of fish migrations by dams causing a reduction in available prey, accidental hooking by fishermen, and boat propellers. Pollution in the Yangtze river also threatens this species. They have been legally protected in China since 1975 and programs to breed Yangtze river dolphins in captivity have been established to preserve the species.

Visit the Evolutionarily Distinct and Globally Endangered (EDGE) species program and the Baiji Foundation for more information on this species and their current status and projects designed to protect them from extinction.