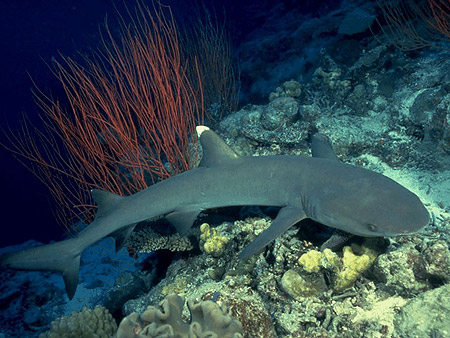 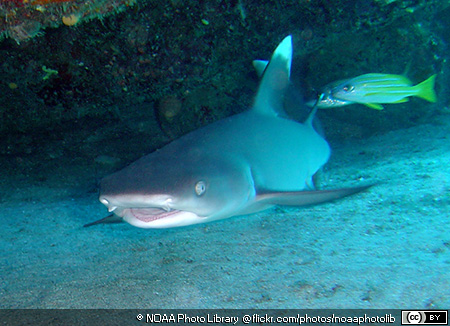 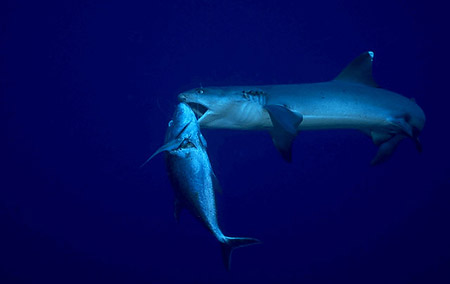 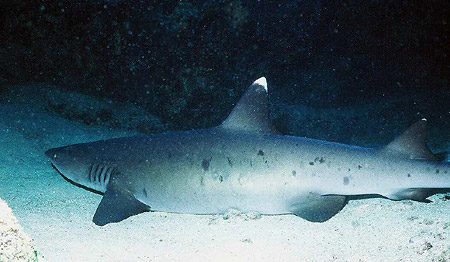 Whitetip reef sharks, Trianodon obesus (Rüppell, 1837), are a slender species with a short, blunt snout. They are brown-gray on their dorsal (top) sides, white on their ventral (lower) sides. They have scattered dark gray spots along the sides of their bodies.

The tips of their first dorsal fin and upper caudal (tail) fin lobe are brilliant white. The tip of their second dorsal fin and lower caudal fin lobe are also white in some animals. Spiracles usually present, teeth are tricuspidate (three-pronged, with a smaller secondary cusp on either side of the central blade) numbering 47-50 upper/44-46 lower jaw, in at least 2 functional rows.

This species is reported to grow to 2.3 m in length but adults over 1.6 m long are rarely seen. Maximum published weight is 18 kg and the maximum reported age is 25 years.

Whitetip reef sharks are found in tropical marine waters, are most abundant on the fore-reef, and during daylight hours are often associated with coral reefs or lying on the bottom in caves and under ledges. Individuals often return to favored resting sites at the same times each day, often for several years. Highly social, these sharks often lie together in groups on the bottom, stretched out side-by-side and even stacked like chord wood. Home ranges of individuals are very small, typically only 0.5 km² or so.

In Australia they are recorded from northwestern Australia, around the tropical north and south to the Queensland coast. They are one of the most abundant species found near coral reefs, together with blacktip reef sharks, Carcharhinus melanopterus, and gray reef sharks, C. amblyrhynchos. They prefer shallow water, but have been found down to 330 m. These sharks live near the bottom or in caves and crevices. Compared to typical reef sharks (requiem sharks), this species swims in a more undulating manner. They are primarily nocturnal, but seem to be correlated with tidal ranges. They can be found in the same area for months (a few square kilometers) but territoriality is not known. They are sluggish inhabitants of lagoons and seaward reefs where they are often found resting in caves or under coral ledges during the day, or usually on a sand patch, or in a channel. They are more active at night or during slack tide in areas of strong currents. They are known to travel distances from about 0.3-3 km in periods up to about 1 year.

Whitetip reef sharks feed nocturnally on benthic animals such as fishes, octopuses, spiny lobsters, and crabs. They have been observed feeding cooperatively at night at Cocos Island, Costa Rica, moving over the reef face like a phalanx of soldiers, flushing out sleeping prey. Foraging individuals often pause to wriggle their elongate bodies into crevices and under coral heads, twisting and turning violently and often breaking off coral and tearing their fins and skin. As such, the whitetip reef shark occupies a niche more like that of a moray eel than a typical shark.

One to five 60 cm young per litter. Mode: dioecism. Fertilization: internal (oviduct). Reproductive guild: internal live bearers. Description of life cycle and mating behavior: Viviparous, with 1-5 young per litter. Gestation is about 12 months. Size at birth 52-60 cm total length. Distinct pairing with embrace. One to 11 males follow a female until one gently nips her gill region; if she accepts him, he grasps one of her pectoral fins in his mouth and mates with her, their heads close together on the bottom and their bodies entwined and extending up into the water column at an angle of about 45 degrees. Mating typically lasts 1.5 to 3 minutes. They reach sexual maturity at an age of about 8 years and a length of about 1 m (males and females). Size at birth 52-60 cm total length.

The whitetip reef shark is a curious species that often approaches divers. It is not considered dangerous to humans. Its restricted habitat, depth range, small litter size and moderately late age at maturity suggest that, with increasing fishing pressure, this species may become threatened.

Rarely reported to attack humans, but is potentially dangerous, particularly when when fish have been speared. Probably fished wherever it occurs (no data). Meat and liver utilized fresh for human consumption. The liver of this shark has been reported as toxic.