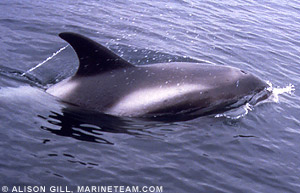 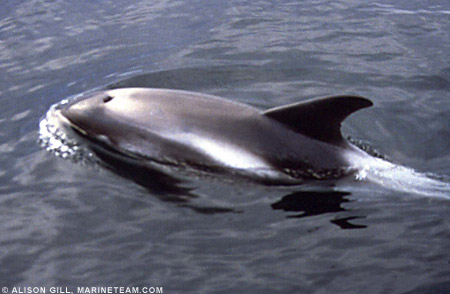 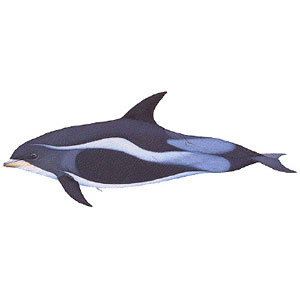 White-beaked dolphins, Lagenorhynchus albirostris (Gray, 1846), have a stocky body and vary in color throughout the species. Generally, these dolphins are light gray to whitish in color with distinctive markings on their body such as a lighter gray stripe, a gray-brown patch, or a white chevron-shaped stripe in front of their dorsal fin near their blowhole. These markings may also extend to their eyes. They have white beaks that measure about 5-8 cm long, which are sometimes mottled with light to dark gray spots, or are entirely light gray in color. Their flukes (tails), tail stock and flippers are generally dark gray, but sometimes feature white markings near the base of their flippers and the underside of their flukes. They are almost white on their ventral (under) sides. Juvenile white-beaked dolphins have hairs on their upper lips, and adults have 4-6 hair follicles on each side of their upper jaws.

Their large, curved dorsal fins are rounded at the tips. Their dorsal fins and flukes appear to decrease in size as the dolphins mature. Their flippers are also large, and can reach up to 19% of the total adult body length. The tail stock (the shaft part of their tail) of Lagenorhynchus albirostris is tapered unlike that of Atlantic white-sided dolphins, Lagenorhynchus acutus, although these two species are often confused for one another because of their similar coloration.

White-beaked dolphins typically form groups of 1-35 individuals, although occasionally schools of several hundred animals have been reported. The largest school observed contained about 1,500 dolphins, however groups this size are rare and are thought to consist of several smaller subgroups. White-beaked dolphins are known to bow ride and ride the waves behind the stern. They are agile swimmers and are frequently observed leaping from the water.

White-beaked dolphins, Lagenorhynchus albirostris, are found in North Atlantic waters from the Davis Strait and Cape Cod to the Barents Sea, the Baltic Sea, Portugal and possibly Turkey. Lagenorhynchus albirostris generally prefers cool waters and migrates north into the Davis Strait during the spring and summer, then back to more southern waters in the autumn and winter.

White-beaked dolphins reach sexual maturity at a length of about 2 m. Females bear calves between June and September that measure about 1.15 m long and weigh 40 kg.

White-beaked dolphins are hunted along the coasts of Iceland, Newfoundland, and Norway. They are at risk from ocean pollution such as organochlorides and heavy metals. Population sizes in some areas have increased during the last few decades, however others (such as those in the Gulf of Maine) have declined.