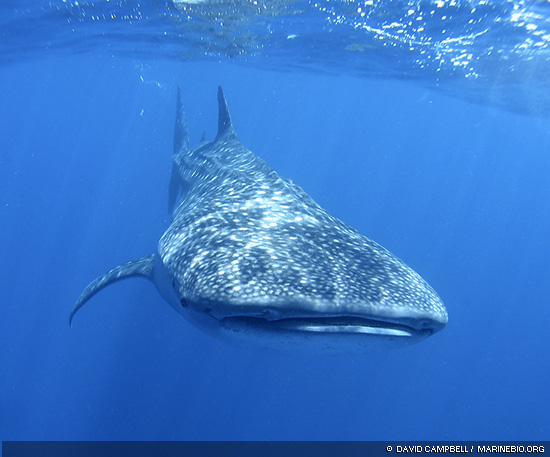 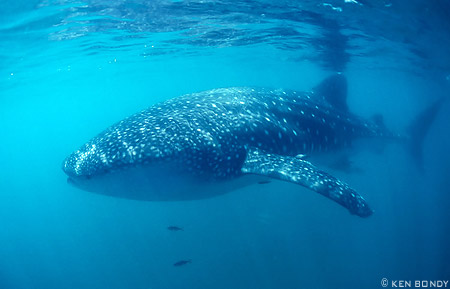 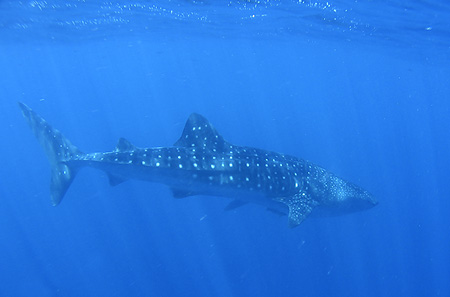 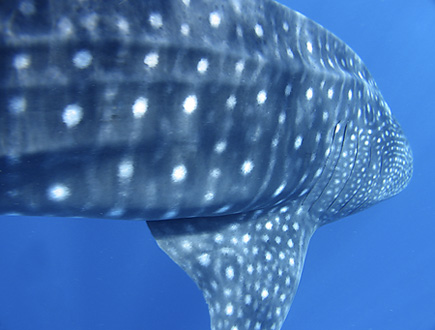 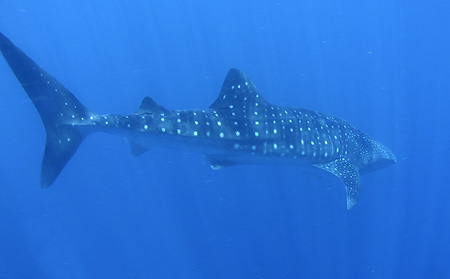 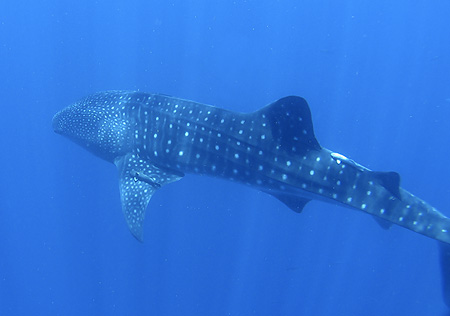 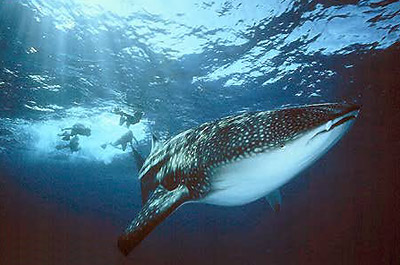 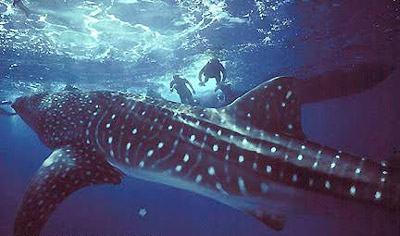 Whale Sharks ~ Shark Juggling?! And the Death of a Deity… :: MarineBio Video Library

Whale sharks, Rhincodon typus (Smith, 1828), are the biggest sharks and the biggest fishes in the ocean. They are NOT whales nor are they dangerous to humans (like nearly all sharks). They have a distinctively wide mouth at the very front of their head (rather than on the underside like most sharks). They have wide, flat heads, rounded snouts, small eyes, 5 very large gill slits, 2 dorsal fins and 2 pectoral fins. The spiracle (a vestigial first gill slit used for breathing when the shark is resting on the sea floor) is located just behind the shark’s eye. Its tail has a top fin only slightly larger than the lower fin.

Whale sharks have distinctive light-yellow or white markings (random stripes and dots) on their very thick dark gray skin which is up to 10 cm thick. They also have three prominent ridges running along each side of their body.

Whale sharks measure up to 20 m long and weigh up to 34,000 kg. Most individuals encountered are between 6-12 m long. Like most sharks, the females are larger than males.

Whale sharks have a very widespread distribution, occurring in all tropical and warm temperate seas, except in the Mediterranean. During the day, they spend most of their time feeding near the surface, preferring sea surface temperatures around 21-30°C, they often go deep at night and when traveling, reaching depths of more than 700 m. 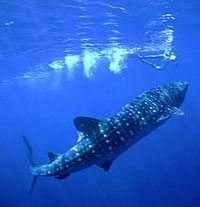 Whale sharks are filter feeders, sieving enormous amounts of plankton, krill, small fish and even squid through their gills as they swim along. After closing their mouth, the sharks use their gills rakers, thousands of bristly structures about 10 cm long, to clean the captured prey from its gills. Anything that doesn’t pass through the gills is eaten. Whale sharks sometimes assume a vertical orientation in the water, rhythmically rising partially above the surface and sinking below with mouth wide open, allowing plankton-bearing water to flush through the gill rakers. Whale sharks can filter over 6,000 liters of water an hour and have about 27,000 very tiny teeth arranged in some 300 rows but they are of little use in feeding.

Whale sharks were long thought to be oviparous. An egg measured 36 cm long was found in the Gulf of Mexico in 1953, which was thought to be a whale shark egg. Recently, however, it was discovered that pregnant females carry their pups, numbering in the hundreds, therefore, whale sharks are ovoviviparous, giving birth to live young. Newborns are over 60 cm long. It has been calculated that whale sharks reach sexual maturity at 30 years old and may live to be 100-150 years old, but no one knows for sure, yet.

Whale sharks are generally solitary creatures. However, groups of whale sharks are seen seasonally at certain sites during plankton blooms or mass coral spawnings, such as those that occur off Ningaloo Reef, Western Australia, in March to May.

They are slow swimmers at speeds of no more than 5 kph. They swim by moving the posterior 2/3 of their bodies from side to side (not just their tails, like great white sharks and certain other sharks).

Whale sharks are not aggressive toward people and usually indifferent to divers, but an accidental blow from the powerful tail has caused serious injury. Whale sharks are important draws in boat- and snorkeling-based marine eco-tourism programs of many countries, including Australia, the Philippines, the Maldives, and Belize. To prevent driving off the sharks and injuries to tourists, these countries have developed interaction guidelines that are enforced to varying degrees (strict off Western Australia and Belize, not so strict elsewhere).

Whale sharks, Rhincodon typus, are now listed as Vulnerable (A2bd+3d) on the IUCN Red List of Threatened Species due to:

“The Whale Shark (Rhincodon typus) is a cosmopolitan tropical and warm temperate species and is the world’s largest living chondrichthyan. Its life history is poorly understood, but it is known to be highly fecund and to migrate extremely large distances. Populations appear to have been depleted by harpoon fisheries in Southeast Asia and perhaps incidental capture in other fisheries. High value in international trade, a K-selected life history, highly migratory nature and normally low abundance make this species vulnerable to commercial fishing. Dive tourism involving this species has recently developed in a number of locations around the world, demonstrating that it is far more valuable alive than fished.”