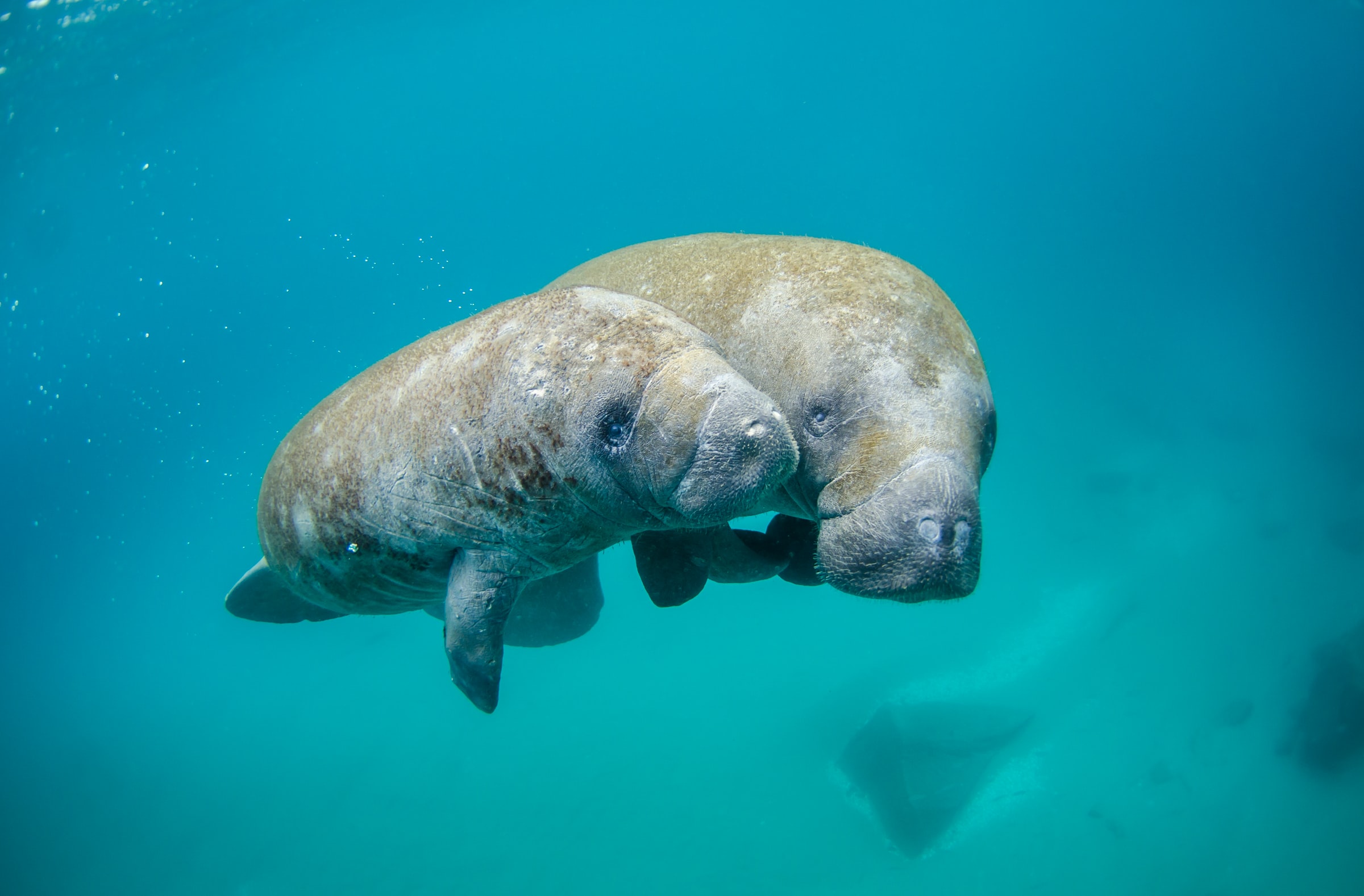 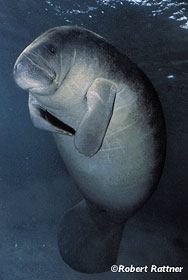 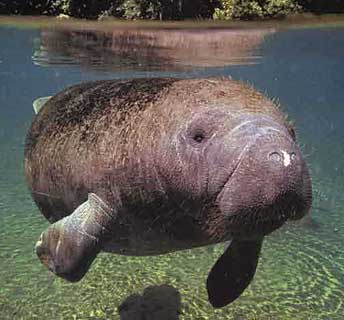 West Indian manatees, Trichechus manatus (Linnaeus, 1758), aka American, Antillean, Caribbean, North American or Florida manatees and sea cows, are large, gray-brown aquatic mammals with bodies that taper to a large flat, paddle-shaped tail. They have two flippers with three to four nails on each, and their head and face are wrinkled with whiskers on the snout. The manatee’s closest relative is the elephant and the hyrax (a small furry rodent-like animal).

Manatees are believed to have evolved from a wading, plant-eating animal. The West Indian manatee is related to the West African manatee, the Amazonian manatee, the dugong, and Steller’s sea cow (which was hunted to extinction by 1768). The average adult manatee is about 3 m long and weighs around 450 kg. Maximum lengths have been recorded at 4.5 m with weights up to 1,500 kg.

Manatees are gentle and slow-moving. Most of their time is spent eating, resting, and in travel. They may rest submerged at the bottom or just below the surface, coming up to breathe on the average of every three to five minutes. When manatees are using a great deal of energy, they may surface to breathe as often as every 30 seconds.

Manatees can be found in shallow, slow-moving rivers, estuaries, saltwater bays, canals and coastal areas. Manatees are a migratory species. Within the United States, West Indian manatees are concentrated in Florida in the winter, but can be found in summer months as far west as Alabama and as far north as Virginia and the Carolinas. West Indian manatees can also be found in the coastal and inland waterways of Central America and along the northern coast of South America, although distribution in these areas may be spotty.

Manatees, Trichechus manatus, are completely herbivorous. They eat aquatic plants and can consume 10-15% of their body weight daily in vegetation. They graze for food along the bottom and on the surface. Because of the low nutritional value of the plants consumed, manatees must graze for 6-8 hours a day. Each day they consume 5-10% of their body weight, which can be over 100 kg in a large individual. This low-nutrient diet also has also contributed to the the development of low metabolic rates. Manatees can survive on 25% percent less energy than a typical mammal of similar size.

Manatees feed on abrasive plants and, as a result, their molars are continually replaced throughout life as they wear down. Hind-gut fermentation is another adaptation to the herbivorous diet of the manatee, aiding in breaking down the cellulose of the plants eaten.

The reproductive rate for manatees is slow. Female manatees are not sexually mature until 5 years old, and males are mature at approximately 9 years of age. It is believed that one calf is born every 2-5 years; twins are rare. The gestation period is approximately 13 months. Mothers nurse their young for a long period and a calf may remain dependent on its mother for up to 2 years.

There are two subspecies of the West Indian manatee: the Florida manatee T. manatus latirostris and the Antillean manatee T. manatus manatus. These subspecies are distinguished by certain cranial features and by their geographical distribution. For centuries West Indian manatees have been hunted for their meat, hide, and bones. This hunting continues in many South and Central American countries. The domestication of manatees has been suggested. Their status as an endangered species makes this an unlikely option. It has also been suggested that manatees be used as a method of aquatic weed control within their range. However, it has been shown that the amount of plant material consumed by these animals is not large enough to make this a viable option.

As the state’s official marine mammal, the Florida manatee is of particular interest to tourists visiting the area. Approximately 400 manatees die each year in Florida state waters alone according to the Florida Fish and Wildlife Conservation Commission (2007), “…watercraft-related mortalities and red tide contributed to more than half of 2006’s deaths in instances where scientists could determine a cause of death.”

The West Indian manatee, Trichechus manatus, is listed as Vulnerable (VU A2d) with the IUCN Red List of Threatened Species:

VULNERABLE (VU)
A taxon is Vulnerable when it is not Critically Endangered or Endangered but is facing a high risk of extinction in the wild in the medium-term future, as defined by any of the criteria (A to E) as described here.