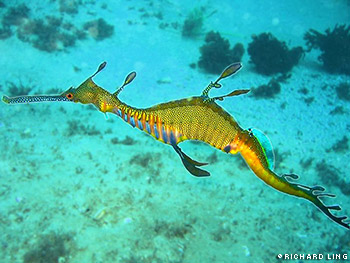 Weedy sea dragons, Phyllopteryx taeniolatus (Lacepède, 1804), aka common seadragons, are an amazing type of seahorse that are native to Australian waters.

Weedy sea dragons resemble (you guessed it) seaweeds. They have long, slender reddish-brown bodies comprised of bony plates with yellow and purple accents, and several weed-like appendages used for camouflage. Small pectoral fins on their neck are used for body positioning, while long, shallow dorsal fins are their sole means of propulsion. Males are narrower and darker than females, and both have several short spines used for protection. Their snouts are elongated, and resemble other seahorses. Unlike other seahorses though, their tails are not prehensile.

Usually found alone or in pairs, weedy sea dragons are not strong swimmers. They spend most of their time swaying with surge or currents like the sea grasses and weeds that make up their habitat while they drift through the water. They rely on their camouflage to protect them from predators.

Weedy sea dragons, Phyllopteryx taeniolatus, are found along the southern coastlines of Australia, including Tasmania, as well as the southern Indian Ocean, and the southwest Pacific.

Weedy sea dragons live in waters with temperatures between 12 – 23°C, in a depth range of 10 – 50 m, though most individuals are found in 8 – 12 m of water. They can be found in kelp forests, on rocky reefs, and in seaweed or sea grass beds.

Weedy sea dragons, Phyllopteryx taeniolatus, feed on tiny crustaceans, sea lice, mysid shrimp, and fish larvae. They have no teeth, and feed by sucking prey into their pipe-like mouths. Specially developed muscles and bones allow them to generate a lot of suction.

Weedy sea dragons are relatives of seahorses, and like seahorses, males carry the eggs in a brood pouch. Females lay up to 250 eggs in the males’ brood pouches, males then fertilize and carry the eggs for about 8 weeks before they hatch. Breeding season is early summer, with only one breeding per pair each season. Individuals are mature and able to breed within their first year, though most wait until they are fully-grown in their second year.

Weedy sea dragons are listed as Near Threatened by the IUCN. While it is not yet known if weedy sea dragons have experienced population declines, we do know that habitat destruction within their range has occurred. “Harvesting” for aquariums, while seen as a threat to populations at specific sites, is not thought to have a big impact on their overall numbers, yet. Harvesting for the Chinese medicine trade has been reported as well, and may pose a significant risk. Their main threat, however, may be their own biology. As weak swimmers with poor egg dispersal, it may be hard for future generations to develop offspring successfully, especially as their habitat declines due to global warming, urchin barrens, habitat destruction, and pollution.