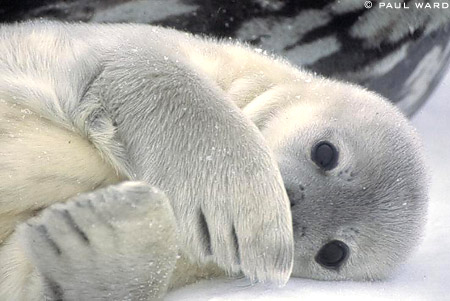 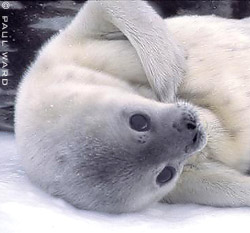 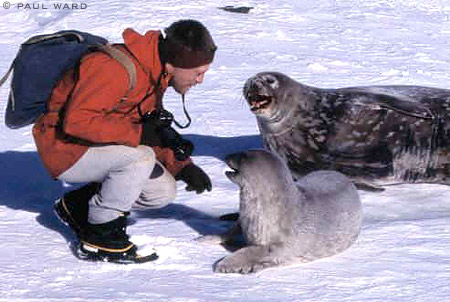 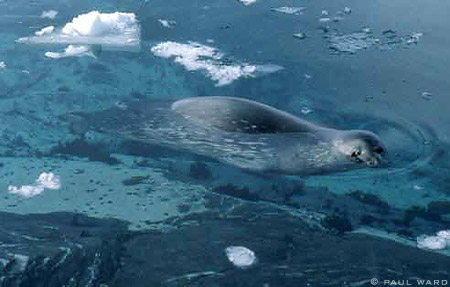 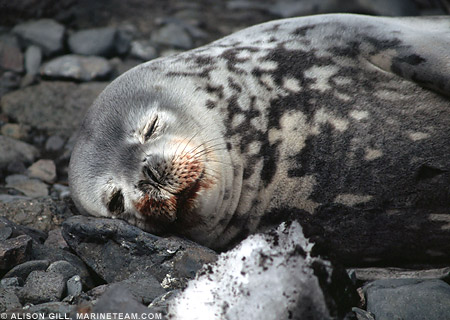 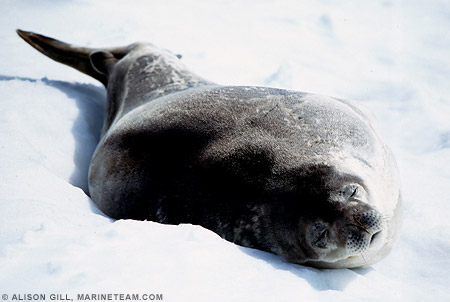 The adult coat of these fascinating seals is dark gray-black, mottled with darker and lighter patches, which is molted from December to March. Adult males reach up to 2.5-2.9 m in length and adult females reach 3.3 m. Weddell seals weigh between 400-600 kg. They are equipped with specially modified front teeth used to maintain ice holes in fast ice (sea ice which forms and fastens to the coastline) to breathe. Weddell seals can live up to 22 years of age.

Weddell seals, Leptonychotes weddellii, live further south on the planet than any other mammal. Although most ice-loving seals prefer the pack ice, Weddell seals are found on near-shore fast ice. This seal’s population is estimated at 800,000 around the Antarctic continent. Small populations also breed on South Georgia and the South Sandwich Islands, the South Shetland Islands, and the South Orkney Islands.
https://www.youtube.com/watch?v=yi-TSD5FMO4

Leptonychotes weddellii feeds mostly on Antarctic fish species, and has some unique hunting behaviors. They have been observed blowing air into crevices in the sea ice ceiling to flush out fish. They are stealthy hunters and can “sneak up” on a fish from only 3 cm away. They have extraordinary vision, and are also known to hunt Antarctic cod by silhouetting it against the sea ice. They can also remain submerged for long periods of time, as long as 73 minutes in one case, and have been observed traveling from and back to an ice hole 3 km away. They are deep divers reaching up to 600 m in depth. Weddell seals also eat cephalopods and crustaceans. Young seals in the pack ice region are more dependent on pelagic prey.

Weddell seals are not at great risk of predation because of their preference for the fast ice and heavy pack ice regions, however some have been preyed upon by orca (killer whales) and to a lesser extent by leopard seals, particularly in the spring and summer when the ice breaks up.

Female Weddell seals reach sexual maturity between 3-6 years, males between 7-8 years. Breeding season begins in the more northern habitats in September and between October-November farther south. Females haulout on the fast ice to give birth, and are usually found widely distributed along tide cracks and broken ice. Pups are born with a gray or golden brown coat, which molts after 6 weeks. Pups are nursed for 5-6 weeks, and accompany their mothers to the water after only 2 weeks. Newborns measure about 1.2-1.5 m in length and weigh 22-30 kg. The juvenile mortality rate for Weddell seals is less than that of the other Antarctic species because their more remote habitat protects them from predators. 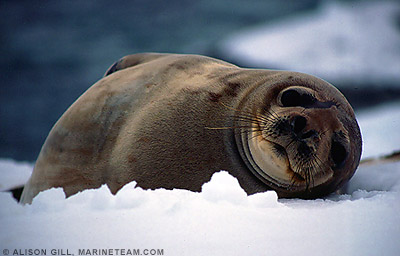 When the pups begin to wean, mating begins under the ice where males have established underwater territories beneath the cracks. Adult seals show a high degree of fidelity to the same breeding grounds year after year, and many remain within <100 km of the site year round. Juveniles remain on the pack ice until they reach adulthood when they select a colony on the fast ice.

Weddell seals, Leptonychotes weddellii, have been hunted in the past, to a small degree, for their meat for sled dogs. They have not been widely hunted commercially because of they are not easily accessible to seal hunters.

The Convention for the Conservation of Antarctic Seals (CCAS) and the Antarctic Treaty regulate all seal hunting in the Antarctic, however a commercial hunt of 107 Weddell seals was carried out by the Soviet Union in 1986-1987.

To prevent disturbance to Weddell seal populations, the Antarctic Treaty has also implemented environmental measures banning mining and oil drilling, refuse disposal, and the use of pesticides in the region.

Because Weddell seals prey on fish that depend on krill, recent pressures on krill stocks by the commercial fishing industry will reduce the food supply for Weddell seals as well as other species.

The Weddell seal may also be threatened by Brucellosis, a reproductive disease for which Chilean scientists found antibodies in a Weddell seal Antarctic fur seal sample.