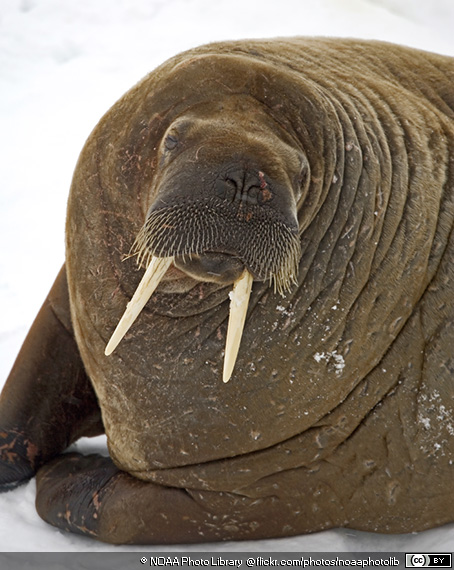 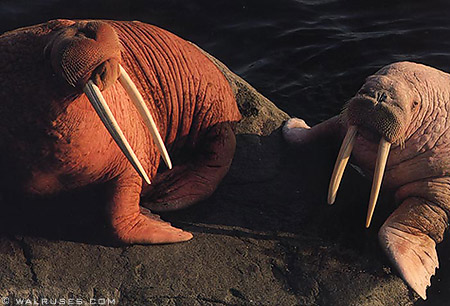 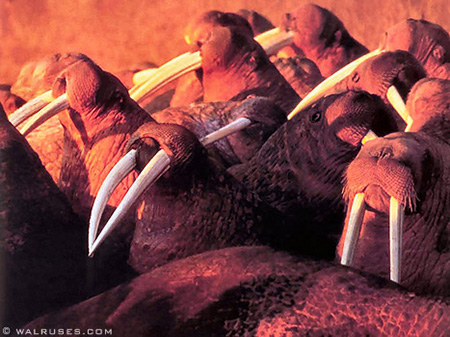 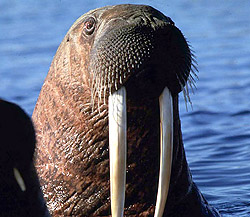 Walruses, Odobenus rosmarus (Linnaeus, 1758), are large marine mammals that weigh 400-1,700 kg. They are well-known for the large tusks, present in both males and females, that can grow to lengths of up to 1 m. The average size of these canine teeth is 50 cm, and they are usually larger in males than females. The multifunctional tusks are used to fight, feed, cut through ice (walruses are known to use their heads to break through ice up to 20 cm thick), hook over ice for stability while sleeping, and to help to pull themselves out of the water. Walruses have stiff beard bristles, or vibrissae, that grow up to 30 cm long, and are shed and replaced yearly.

Other than their characteristic beards, walruses have little hair. Their short, coarse hair actually thins with age. They have wrinkled skin up to 4 cm thick; the necks and shoulder skin on adult males is particularly thick. Although they are predominantly brown in color, the skin becomes paler with age and when they enter the water as blood flow to the skin is restricted. When walruses are warm, blood flow to the skin increases and they become dark reddish brown in color. Walruses have internal ears. 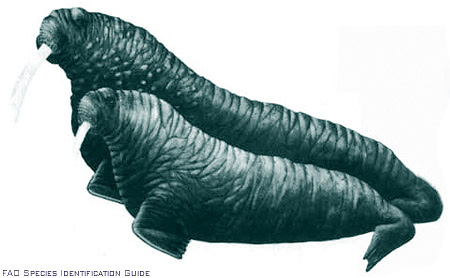 Walruses swim at an average speed of 7 kph, but they are able to swim as fast as 35 kph. Walruses maintain buoyancy with the 2 pharyngeal pockets found on either side of the esophagus that hold up to 50 liters of air. These pockets facilitate sleep in the water in an upright position, and they may be used to amplify mating calls, which sound like the ringing of a bell.

Walruses, Odobenus rosmarus, are found throughout the Arctic. Three distinct subspecies are classified as:

Pacific walruses are a little larger than their Atlantic counterparts, and the Laptev Sea populations are of intermediate size.

Walruses tend to inhabit areas with ice floes near the coasts of Arctic waterways, and migrate seasonally with as the ice recedes and expands. This migration can cover distances of 3,000 km. During summer months, males inhabit coastal beaches and rocky islets. Females and juveniles tend to stay on ice floes in all seasons.

Walruses, Odobenus rosmarus, mate in January and February, and are thought to mate underwater. Males sexually mature at 8-10 years, but do not usually begin mating until they are better able to compete for females at about 15 years of age. Males possess a large baculum (penis bone), which reaches up to 63 cm in length, which is the largest of any mammal in both absolute size and relative to body size. Females sexually mature at 6-7 years, and are fully grown at 10-12 years. Large mature males mate exclusively with a herd of females for 1-5 days. After mating, conception is delayed for 4-5 months. Calves are born 10-11 months after conception between mid-April to mid-June for a gestation period of 15-16 months. Females give birth to a single calf that measures about 1.1 m long and weighs approximately 63 kg. Calves are gray in color and able to swim at birth.

Calves are nursed for about 2 years, although they are capable of finding food before they are weaned. Females are most fertile between 9-11 years old, and generally give birth every other year.

Walruses in the wild can live up to 40 years.

Walruses, Odobenus rosmarus, have been hunted for their meat, skin, and ivory. They are now protected in many places, however they continue to be killed by subsistence hunters and poachers.