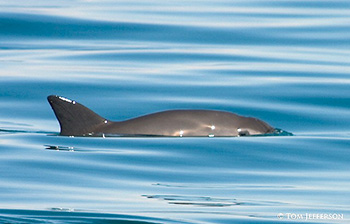 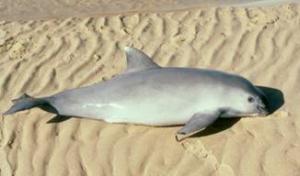 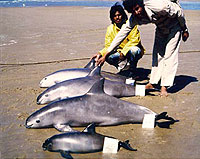 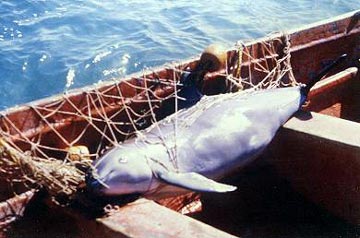 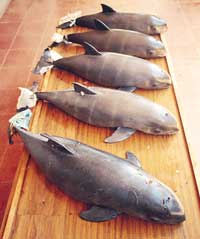 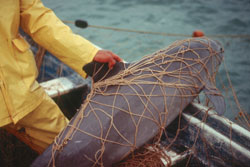 Vaquitas, Phocoena sinus (Norris and McFarland, 1958), aka Gulf of California harbor porpoises, reach 1.2 to 1.5 m in length and average 55 kg; females being slightly larger than males. They have between 34-40 “acorn-like” teeth in their jaws of their blunt-shaped beaks. Vaquitas are similar in shape and size to the harbor porpoise, Phocoena phocoena, with the exception of a more slender body shape. Their slender shape is thought to facilitate heat dissipation in the warm waters they inhabit.

Vaquitas have been observed both singly and in small groups, which suggests that they are a less gregarious dolphin species, and perhaps more competitive during mating season.

Like many other phocoenids (porpoises) and delphinidids (dolphins), vaquitas use sonar as a means of communicating with other vaquitas and navigating throughout its habitat.


Vaquitas, Phocoena sinus, are currently the most endangered cetacean in the world and are found only in the northern area of the Gulf of California in coastal, shallow waters. Vaquitas are the only porpoise species found in such warm waters. Most phocoenids inhabit waters cooler than 20°C. Vaquitas are able to tolerate the fluctuations in temperature in the Gulf of California that range from 14°C in January to 36°C in August.

Vaquitas, Phocoena sinus, feed on teleost (bony) fishes and squid found near the surface of the ocean.

The vaquita, Phocoena sinus, reaches sexual maturity between 3-6 years. Females do not ovulate annually, therefore they do not give birth each year. They reproduce seasonally from mid-April to May, with a gestation period of about 10.6 months. Males mate with as many females as possible. Similar to other mammals with multi-male breeding systems, male vaquitas have large testes relative to their body size. Females give birth to 1 calf per pregnancy that averages in size from 0.6-0.7 m in length. Calves are nursed for <1 year. Juvenile vaquitas can be identified by the white spots on their dorsal fins.

The vaquita, Phocoena sinus, is listed as Critically Endangered, and only possibly several hundred remain. They often suffer from entanglement in fishing gear, particularly shrimp nets and gillnets set for sharks. An estimated 25-30 vaquitas drown each year as a result. Juveniles are particularly at-risk, which further threatens the sustainability of this species as the number of reproductive adults is reduced. They are also at-risk because of their similarity in size to a popular seabass like fish called totoabo. Although fishing for totoabo is illegal, it continues to be heavily exploited, which threatens both vaquitas and totoabo.