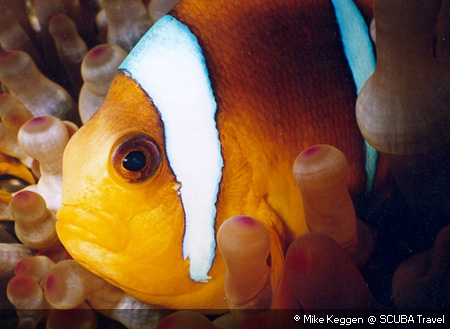 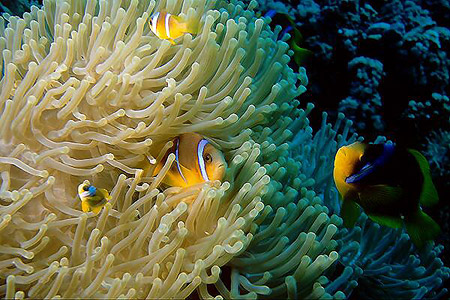 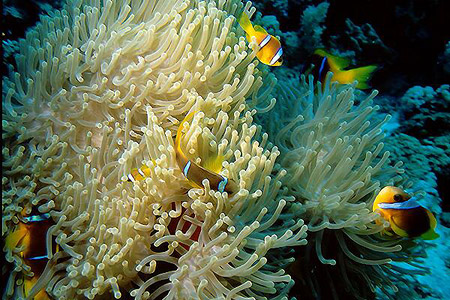 Twoband anemonefishes, Amphiprion bicinctus (Rüppell, 1830), often called a clownfish or threebanded anemonefish, are the most common clownfish in the Red Sea. They are found at depths from 1-30 m.

Twoband anemonefish are yellow-orange with 2 black-edged white bands, the first running just behind the head, the second from the notch between the spinous and soft dorsal fin to the abdomen. Max size: 14 cm total length (male/unsexed). This species has been reared in captivity.

This species is well known for its relationship with anemones, a classic example of symbiosis. The tentacles of the anemone protect the clownfish from predators. When the clownfish first contacts the anemone, it jerks back from the stinging nematocysts, but gradually its mucus coating gives it immunity. The anemone benefits by the clownfishes movement among its tentacles, which increases water flow and therefore oxygen. The anemone may also feed on the fish’s waste material.

Some clownfish live in anemones as juveniles and move to corals as adults. Some never move from their anemones. Some are territorial and will dart meters out and “attack” depth gauges, mouthpieces or divers themselves.

Clownfish in aquariums have been observed bathing in air bubbles, a behavior similar to the clownfish’s behavior within the tentacles of the anemone.

The twoband anemonefish feeds on benthic (bottom-dwelling) algae and occasionally on zooplankton.

Fertilization is external. They are known as guarders, nesters. Sex reversal is completed between 26-145 days. In a field test, a functional male laid eggs in 26 days after removal of the female. Eggs are laid at the base of the anemone, and the parent often rubs the anemone causing the tentacle to extend, which in turn forms a protective canopy for the eggs of the fish.

Not yet on the IUCN Red List of Threatened Species. Harmless to humans.