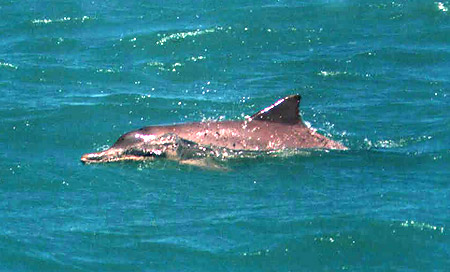 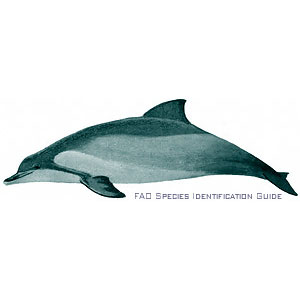 There are 2 species in the Genus Sotalia:

The marine tucuxi reaches 2.1-2.2 m in length, and the riverine tucuxi reaches 1.5 m in length. They are light gray to blue-gray in color on their dorsal (upper) sides, and light gray to pink on their ventral (under) sides. Their flanks are slightly lighter than their dorsal sides between their flippers and dorsal fins. Their dorsal fins are triangular and may be slightly hooked at their tips. Tucuxi have moderately slender and long beaks.

The marine and riverine tucuxis have similar social behaviors. Marine tucuxis can be found in groups of up to 30 individuals. They are most commonly found in pairs in the Baia de Guanabara and Cananéia, although group size varies by time of day and activity. Juvenile marine tucuxis are usually observed in small groups of 3 that include the calf and 2 adults or 4 (2 calves and 2 adults). Riverine tucuxis are found in groups of 1-6 in more than half of the observations recorded, and in groups of up to 9 individuals on occasion. The composition of the riverine groups is unknown, however groups consisting of 1 female with 1 male calf, and 1 pregnant female with an 1 juvenile female have been recorded. The average group size in the Upper Amazon River is about 3.9 individuals.

Tucuxis, Sotalia spp., are found in both fresh and saltwater. The coastal range of S. fluviatilis extends from Florianopolis, Brazil, north into the Caribbean Sea as far as Panama. One individual was reported near Nicaragua, north of the mouth of the Layasiksa River on the west side of Waunta Lagoon (13°40’N). Riverine tucuxis, S. guianensis are found in waters below an elevation of about 100 m in the Orinoco and Amazon rivers, primarily in estuaries and bays, and in deep river channels or flood-plain lakes. The separation of Sotalia into two species is supported by data on genetic variation between the marine and riverine Sotalia in Brazilian waters.

Population data for the tucuxi is scarce, however it appears to be relatively abundant throughout its range. The population data available is from small geographic areas such as: the mouth of the Magdalena river in Colombia where an estimated 100-400 dolphins were counted, the Gulf of Cispata near San Antero, Colombia where they were abundant, Suriname where they were common in the mouths of the larger rivers, and in Guyana where they were reported as “frequent” in the lower reaches and mouth of the Essequibo river. They have also been reported as common in the Baia de Guanabara near Rio de Janeiro, Brazil where an estimated population of 418 individuals in about 109 groups was reported, although this conflicts with more recent data that estimates only 69-75 individuals in that region. The tucuxi population near Cananéia Island was estimated at 2,829. Population density estimates in the Amazon drainage area show an average density of approximately 1.1 dolphins per km of river between Manaus and Tefé in the Solimöes river. In the Iquitos area, 62 Sotalia were reported over a 36 hr observation period. Sotalia were frequently encountered in the Samiria river and its tributary the Santa Helena river, and in Colombia in the Loretoyacu river, the Tarapoto river at the El Correo lake system, and in the lower region of the Orinoco river. In another survey conducted in 1993, a population estimate for the tucuxi along 120 km of the Amazon river bordering Colombia, Peru, and Brazil was about 409 tucuxi in the study area. Population density estimates calculated at the number of Sotalia per square mile put the highest number in lakes (8.6), followed by areas along main river banks (2.8), and around islands (2.0).

Sotalia fluviatilis prefer shallow protected estuarine waters or bays near junctions of rivers and channels. In the Baia de Guanabara (Rio de Janeiro), they inhabit channels at least 25 m deep and avoid areas with less than 6 m of water. They are not, however, limited by physical factors such as visibility and pH as they are found in all types of water in the Amazon, other than rapids and fast-flowing turbulent water.

Marine Sotalia may travel up to 130 km or more upriver. They are thought to have a specific home range, although the area covered may be large given the distances between the estuaries and protected bays they inhabit. In one study, individual Sotalia (identified by natural marks) remained in the same area for over 1 year, and in another study 2 tagged tucuxi were were found within 5 km of the original tagging site up to 1 year later.

Daily rhythms are apparent in the movement of the tucuxi as well. Studies in the Amazon indicated increased activity between 9-10:00 am following movement into lakes from rivers during the early morning hours before 9:00 am. In another study, Sotalia entered the Bahía de Guanabara between 6-8:00 am and left between 1-6:00 pm, although they rarely left the same day they entered. These movements may be related to preferred resting and feeding areas.

Marine tucuxi, S. guianensis, from the southeast Brazil region feed on a diet of fish such as herring, drums, croakers, and cephalopods. In Santa Catarina they are known to feed on anchovies.

In the Amazon region, rivierine tucuxi, S. fluviatilis feed on at least 28 species of fish belonging to 11 families including: tetras, drums, croakers, and catfishes.

Riverine tucuxi, S. guianensis, in Brazil begin calving in October and November during the low water period. Little else is known of the species’ reproduction.

Tucuxi, Sotalia spp., are not hunted commercially. Riverine tucuxi have been protected by the superstitions of fishermen from Colombia to southern Brazil, and in the Amazon. Small numbers of marine tucuxi are caught for shark bait or shrimp traps, and it is thought that a small number may be hunted for sale in the Asian aphrodisiac market for the eyes and genitalia.

Entanglement (bycatch) in fishing gear threatens both species of Sotalia, particularly gillnets, seine nets, and shrimp and fish traps. In one study, 938 tucuxis were taken in drift nets from the port of Arapiranga during the summer of 1996 followed by another 125 during the winter. These data were collected from fishermen in the port who collected the carcasses.

Fortunately, these dolphins do not compete with humans for the same fish as the diet of tucuxis largely consists of noncommercial species.

Like other river dolphin species, damming of rivers for hydroelectric projects threatens the habitat of the tucuxi. These dams can cut off populations from one another thereby restricting the gene flow and they can also prevent migratory fish species preferred by tucuxi from reaching their reservoirs. Furthermore, dams built on freshwater rivers that empty into the sea may affect primary and secondary productivity in the estuaries and reduce the feeding potential in these areas.

Similarly, pollution from industrial and agricultural activities threatens the tucuxi through habitat destruction and the contamination of local food webs. The Baia de Guanabara in Rio de Janiero and Santos in São Paulo are polluted with toxins such as heavy metals. Insecticides made with chemicals banned in other regions (such as the US) are still common in South America.

Recommendations by a International Whaling Commission (IWC) sub-committee in 2000 for the protection of the tucuxi include: 1) research to detect trends in abundance in a range of regions and habitats, 2) research on mortality due to bycatch associated with different fishing methods, and 3) research on the range of the 2 subspecies in areas such as the Orinoco and Amazon estuaries.

National legislation exists to protect the tucuxi in Brazil, Peru, and Colombia. The species is indirectly protected in Ecuador, Venezuela, Guyana, and French Guiana. In the majority of countries within the range, nature reserves may protect the habitat.