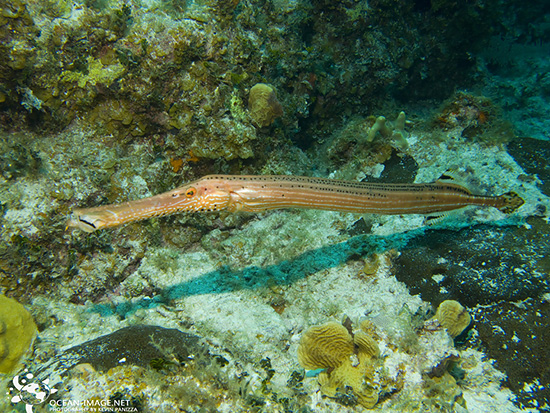 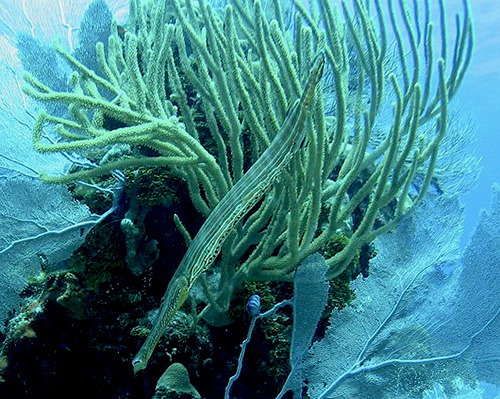 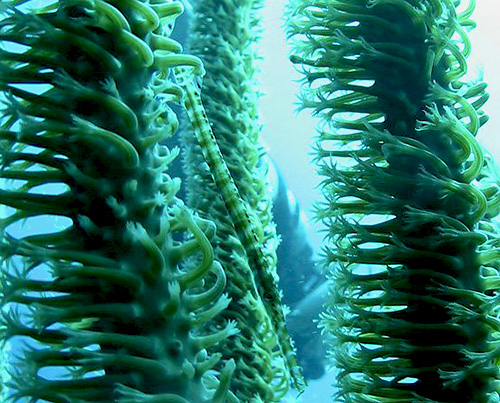 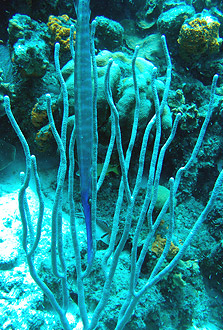 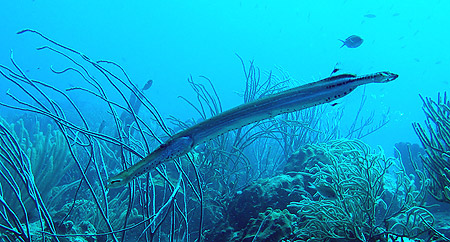 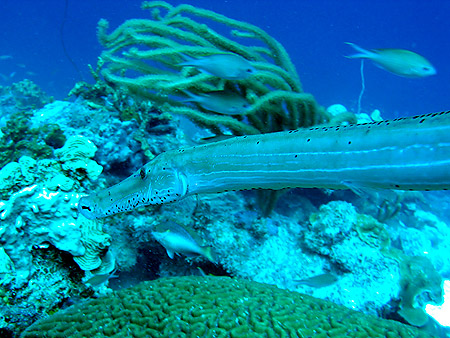 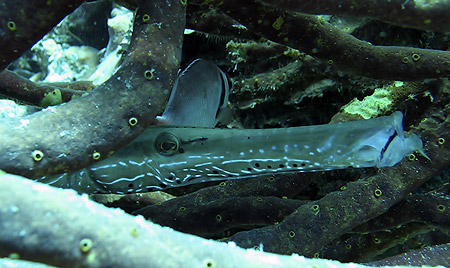 Named for its long, thin snout and body to match, trumpetfishes, Aulostomus maculatus (Valenciennes, 1837), aka Atlantic trumpetfishes, Aulostoma maculatum and Aulostoma maculatus (Valenciennes, 1841), are relatives of seahorses. Masters of camouflage, trumpetfishes are usually mottled reddish brown—though some individuals may be yellow or green, with blue or purple heads—and can easily change color. They often swims vertically with their snouts down, which helps them to blend in with surrounding sea fans, pipe sponges and sea whips, thereby hiding from predators. Trumpetfishes may exceed a meter in length, with the head representing about one third of that length. Their chins have a small barbel.


Trumpetfishes, Aulostomus maculatus, usually live near grassy or weedy areas or coral reefs at depths from 2 to 25 m. In the Western Atlantic, they can be found in the tropics from southern Florida to northern South America and are also seen in Bermuda, the Gulf of Mexico and the Caribbean.

Trumpetfishes are voracious and have crafty means of catching their food. They are known to use large herbivorous fish as camouflage, essentially shadowing them until they find the right moment to strike. If it’s smaller fish or shrimp the trumpetfish is interested in, it will hang vertically in the water column, drifting with the current, as when hiding from its own predators—then ambush any prey unlucky enough to swim beneath it, sucking it up using a method called “pipette feeding.” The trumpetfish’s mouth creates the vacuum needed to suck up small animals by expanding to a size equal to the diameter of the body. Even animals larger than the trumpetfish’s mouth are not safe—the elastic tissues can stretch to accommodate quite a sizable meal.

Like many fish, trumpetfishes have an elaborate courtship ritual or “dance.” Their color-changing abilities, so often used for camouflage, are also employed here. As in their relatives, the seahorses, trumpetfishes place much of their reproductive burden on the males. After the dance, the female trumpetfish transfers her eggs to the male, who fertilizes and carries them in a pouch until they are born.

Trumpetfishes are harmless to humans. They are not yet endangered and are increasingly popular in home aquariums, though they may be difficult to properly feed.