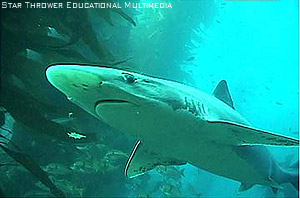 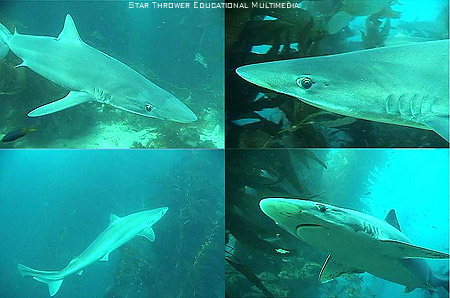 Tope sharks, Galeorhinus galeus, are a widely distributed shark found in: the western Atlantic from southern Brazil to Argentina, in the eastern Atlantic from Iceland to South Africa, the Mediterranean, western Indian Ocean to South Africa, the southwest Pacific in Australia and New Zealand, central Pacific in Hawaii, the eastern Pacific from British Columbia to southern Baja California and the Gulf of California in Mexico.
https://www.youtube.com/watch?v=QJ_S-z5M5PA

The tope shark is commonly found near continental shelves, but can also be found in coastal waters and out to waters up to 550 m deep. This species forms small schools that are highly migratory in the higher latitudes of their range.

Tope sharks, Galeorhinus galeus, are ovoviviparous (fertilized eggs develop in the female) without a yolk-sac placenta. Litter size ranges from 6-52 pups and increases according to the size of the mother. Newborn pups measure 30-36 cm at birth. In Australia, newborns and juveniles aggregate in nurseries found in shallow waters and move into deeper coastal waters during winter after which they return to the nursing grounds. Spawning frequency for the tope shark is once yearly. Ovulation occurs in early summer. The gestation period is about one year.

Tope sharks, Galeorhinus galeus, are considered harmless to humans. They are a popular game and aquarium fish and are “hunted” commercially for its meat, liver oil, fins, and for fishmeal. Tope sharks are frequently caught on tuna longlines. Tope sharks are exported to the Asian market for making shark fin soup. In 1937 it was determined their livers were one of the richest natural sources of vitamin A. During World War II soupfins were especially valuable as a source of this necessary vitamin. Prices skyrocketed and and soupfin populations declined dramatically. Following World War II, the synthesis of vitamin A in laboratories reduced the fishing pressure on soupfins.

The tope shark is listed as Critically Endangered A2bd on the IUCN Red List of Threatened Species: