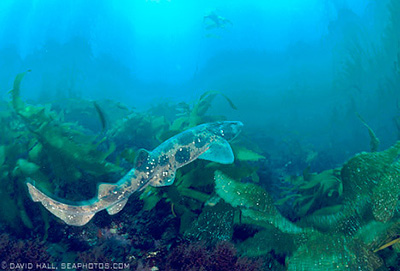 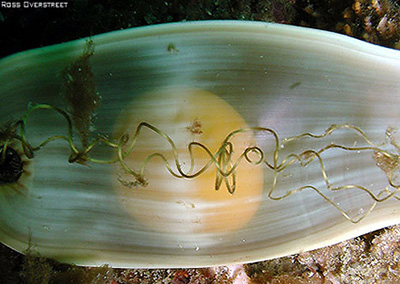 Swell sharks, Cephaloscyllium ventriosum (Garman, 1880), are fascinating creatures that get their name from their ability to swallow large volumes of water or air when threatened, causing them to double in size. They inflate their body by bending into a U-shape while grabbing their tail fin with their mouth. They then swallow water (or air) increasing in size making them difficult to bite or pull from a crevice or other tight spot. Afterward, they emit a bark-like noise and expel the air or water returning to their normal size.

They are normally about 0.9-1 m in length with a stout body, a flat, broad head, short snout, and large mouth — which contains 55-60 teeth in both their upper and lower jaws. Their large oval-shaped eyes have a nictitating membrane. The gill slits of the swell shark are quite small. Their first dorsal fin is situated toward the posterior (forward) end of their body behind the origins of their pelvic fins. They are yellow-brown in color with dark splotches and white spots on their dorsal (upper) and ventral (lower) sides. Juveniles are typically lighter in color.

Although swell sharks are a solitary species, they can be found resting in close groups, sometimes even on top of each other.


Swell sharks, Cephaloscyllium ventriosum, are found in subtropical waters between 37°N-37°S in the eastern Pacific from central California to the Gulf of California and south to southern Mexico and central Chile. This shark prefers rocky, algae-covered areas near the continental shelves and upper slopes from inshore to deeper waters up to 457 m deep, but most commonly are found at 5-17 m.

Swell sharks rest during the day in caves and rocky crevices and then venture out to hunt at night.

Swell sharks feed on small bony fishes, mollusks, and crustaceans. Prey are often ambushed near the bottom. Victims are either sucked in or swept in by the currents.

Cephaloscyllium ventriosum is oviparous – females secrete a substance that forms a protective shell or case to surround the egg as it passes through the oviduct. The egg cases are pliable and pale at first, but develop into hard brown cases within a few hours after birth. She then anchors egg cases, usually two, in rocky, algae-covered habitats where they are protected until they hatch. The triangular egg cases measure 3-6 cm by 9-13 cm, and have strong winding ends that catch on rocks and seaweed. The egg cases contain a yolk to provide nutrients to the embryo until it is hatched in 9-12 months. The newborn pup uses bony protrusions called denticles on its back to aid in hatching from their egg cases. Newborn pups measure 15 cm in length and are able to feed on small mollusks and crustaceans immediately.

Swell sharks are not hunted commercially, however they are often caught as bycatch by the lobster and crab fishing industries. Bycatch poses a risk to this species based on its slow reproduction and limited number of young produced each year.

Swell sharks are considered harmless to humans like most sharks.