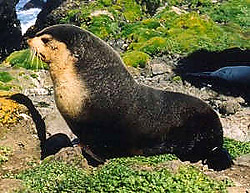 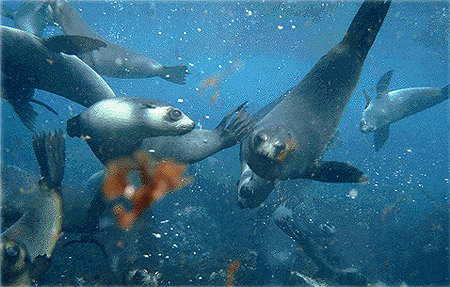 Subantarctic fur seals, Arctocephalus tropicalis (Gray, 1872), like all fur “seals” are actually sea lions (Family Otariidae). These seals were formerly known as the Amsterdam Island fur seal. The adult coat of the subantarctic fur seal is dark brown on the dorsal side, yellow on the chest. Adult males are usually darker than females and have a characteristic crest on top of the head that stands erect when they are excited. This species is also characterized by the pale coloring on the face that forms a “mask.” Adult males measure up to 1.8 m in length and weigh up to 165 kg, while adult females measure about 1.5 m in length and weigh 50-55 kg. Males of the species are known to live over 18 years, females over 23 years.


The subantarctic fur seal, Arctocephalus tropicalis, is found on temperate islands in the South Atlantic and Indian Oceans north of the Antarctic Polar Front. The largest colonies are found at Gough, Amsterdam and the Prince Edward Islands. Colonies have also recently been established at Tristan da Cunha, St Paul, Îles Crozet and Macquarie Islands. Wandering individuals, mostly juvenile males, have been sighted as far north as Brazil, the Juan Fernández Islands, the Comoro Islands, Angola, Australia, New Zealand, and South Africa. At least 80,000 pups are born annually, and the total population is estimated between 277,000 and 356,000.

Subantarctic fur seals, Arctocephalus tropicalis, tend to dive in shallow waters at night when myctophid fish swim near to the surface. Squid is also a part of the subantarctic fur seal diet. Sharks and orca (killer whales) are known predators.

Subantarctic fur seal, Arctocephalus tropicalis, females reach sexual maturity at 4-6 years of age, males at 4-8 years, although males do not achieve territorial status until 10-11 years of age. Breeding males arrive at the breeding grounds prior to the females in November to form territories on rocky shores that will usually contain between 4-12 females. They defend their territories by fighting and vocalization. Females give birth shortly after arriving to pups measuring 65 cm in length and weighing 4-5 kg. Pups are born with a black coat, which will be molted at about 3 months of age. The females mate about a week after giving birth, then begin the feeding cycle beginning foraging trips at sea for about 5 days, (foraging trips of one month have been reported) then returning to nurse for 2-3 days. The milk that the mothers feed their pups is approximately 39% fat, which helps pups to continue growing for approximately 7 months, after which they begin to lose weight until they wean at about 9 months.

Recent research shows that lactating females in Amsterdam Island breeding colonies spend an average of 11-23 days at sea from summer to winter and up to 4 days on shore nursing. Because of the long foraging trips, lactating females have been known to travel up to 530 km from their breeding islands near oceanographic frontal zones where food availability may be greater.

Subantarctic fur seal breeding colonies overlap with Antarctic fur seals, Arctocephalus gazelle, habitat and there is evidence of some inter-breeding between these species at Marion and Macquarie Islands.

Subantarctic fur seals, Arctocephalus tropicalis, were hunted almost to extinction in the 19th century for their fur. All colonies are now protected, and subantarctic fur seals have begun colonizing new locations and growth rates have been estimated at 13-15%. There appear to be no major threats currently facing the species.

Subantarctic fur seals on World Heritage listed Macquarie Island were afforded additional protection in 2000 by the 16 million hectare Marine Park on the eastern side of the island. Also on Macquarie Island, the Tasmanian government announced plans to extend the island’s nature reserve to cover all Tasmanian waters out to 3 nautical miles surrounding the island.

A recent genetic study investigated the impact of commercial sealing on genetic variation and population structure of subantarctic fur seals, which revealed that high levels of genetic diversity and population structure are still present in the species. Three genetic lineages, or clades, exist none of which represents fixed geographic distributions. Subantarctic fur seals from Gough, Prince Edward, and Amsterdam Islands all differ significantly in the ratio each lineage is represented in their populations.