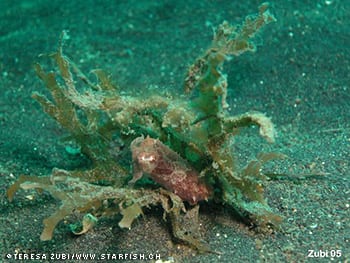 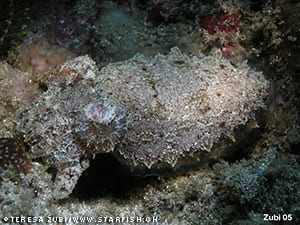 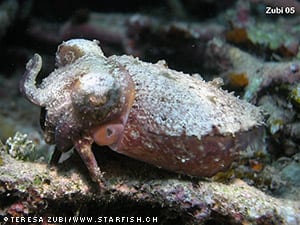 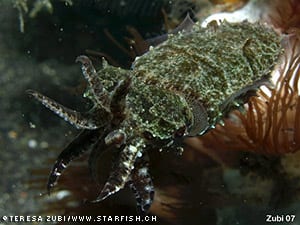 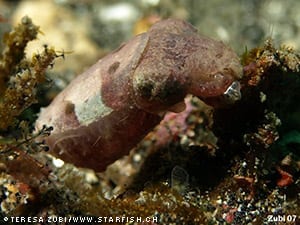 All cuttlefishes are cephalopod mollusks from six different families, including the most common Sepiidae, and are found in all of the world’s seas. Cuttlefish are comprised of 23 genera and 201 individual species with an amazing variety among the various families. Cuttlefishes have some of the same distinguishing features as other cephalopods such as a mantle, advanced eyes, a bird-like beak, eight sucker-lined arms, and two lengthy feeding tentacles. They also possess a hard internal shell, known as a cuttlebone. In living cuttlefishes, their cuttlebones are gas-filled and aid in their buoyancy control. Their cuttlebones are made of calcium carbonate (CaCO3, specifically the mineral called aragonite) and are often sold as nutritional supplements for pets (mainly birds, chinchillas, hermit crabs, and some reptiles) and are even used in the jewelry industry as a polishing agent. Amazingly, cuttlefishes’ outer skin layers contain color-changing chromatophores, leucophores, and iridophores, which allow them to rapidly change their appearance according to their mood or the look of their background.

Sepia bandensis is a cephalopod, related to octopuses, squids, and nautiluses. S. bandensis have eight arms, two feeding tentacles (with what are called tentacular clubs at their ends), three hearts, a ring-shaped brain, a cuttlebone that helps control buoyancy, a fin that encircles their mantle for fine maneuvering, a funnel that gives them jet-like propulsion, superb 360-degree vision (though it appears they are color blind), copper-based blood, and the ability to squirt ink.

Diagnostic Features
Their clubs have 5 suckers in transverse rows with the central 3 suckers enlarged. Their swimming keels extends beyond the base of their clubs. They have dorsal and ventral protective membranes that are joined at the base of their clubs, separated from their stalks by a membrane. Their cuttlebone outline is broad and oval shaped with the bone bluntly-rounded anteriorly and posteriorly and its dorsal surface is evenly convex. It is also calcified with reticulate sculpture and dorsal median and lateral ribs are absent. Their spine is reduced to a tiny, blunt tubercle. Their sulcus is shallow and narrow, and extends along the striated zone only. Anterior striae (bands, stripes, or lines) are an inverted U-shape. Inner cone limbs are narrow anteriorly, broaden posteriorly, slightly convex; outer cone narrow anteriorly, broadens posteriorly. Their dorsal (upper) mantle has a longitudinal row of ridge-like papillae (nipple-like structures) along each side, adjacent to the base of each fin and with scattered short ridges dorsal to cuttlebone (corresponding to whitish bars). Their head and arms have short, scattered, bar-like papillae positioned dorsally and laterally.

Behavior
Males tend to fight with each other, females much less so. While cuttles can tell each other’s sex on sight, humans can only determine a cuttle’s sex by its behavior. At around 3 months of age, males will begin displaying toward each other, flaring their arms, elongating their bodies and making their skin a dramatic black-and white-pattern. Females rarely perform similar behaviors.

Color
They tend to be a light brown, or greenish yellow-brown with a whitish mottle. Their head is scattered with white spots. Their dorsal (upper) mantle has white blotches concentrated into short, longitudinal bars. They often show a pair of brown patches on the posterior end (rear, away from head) of their mantle, often accompanied by white patches over their eye orbits. Their fins are pale with a row of small luminescent blue spots at their base.

Size
Stumpy-spined cuttlefishes reach up to 7 cm in mantle length and cuttles from the Alas Strait, Indonesia are reported to weigh about 40 g (males) and 45 g (females).


Stumpy-spined cuttlefishes, Sepia bandensis, are naturally found in the tropical Indo-Pacific region, specifically off the coasts of the Philippines, Malaysian Borneo, Java, Sulawesi, Alas Strait, eastern Indonesia (e.g., the Banda Sea), and New Guinea. They have also been reported off northern Australia and northeast to the Marshall Islands.

Sepia bandensis are found primarily in coastal shallow waters over coral reefs and sand and are active at night. This species has been observed ‘walking’ (like flamboyant cuttlefishes do), rather than swimming, using their arms and a pair of raised flaps on their ventral (underside) mantle like legs. They are also often found in association with sea cucumbers and sea stars.

Stumpy-spined cuttlefishes, Sepia bandensis, are ambush predators and are often found mimicking the look of whatever substrate is behind them. By creating amorphous skin folds, and changing to mottled or speckled colors, they often blend seamlessly into the background and wait for passing crustaceans or fish to wander too close. Then, with lightning quick reflexes, they snatch the prey and dispatch it quickly with their sharp beak. Their prey is grasped by suckers lined with sharp, chitinous rings, positioned at the club ends of their two feeding tentacles. Their sharp powerful jaws which resemble a bird’s beak can break through shells and bones, while their tongue-like radula strips the remaining flesh. During more active periods this cuttlefish can be seen wearing vibrant, solid colors. And like broadclub cuttlefishes, they may also flash or pulse kaleidoscopic patterns with amazing speed which some suggest may be used to mesmerize prey making them easier targets (see the Kings of Camouflage video for great examples of this by the closely related broadclubs).

Stumpy-spined cuttlefishes, Sepia bandensis, reproduce when they are around five months old. Breeding occurs head to head with the cuttles’ arms intertwined, and can last for as little as a few seconds to as long as minutes. Eggs are generally laid a month after mating and are laid in clusters of 8 to 40 eggs.

Sepia bandensis eggs are about the size of small dark purple to black grapes and are laid one at a time attached to various things on the seafloor. As the eggs get closer to hatching, they swell and become transparent, allowing you to see the baby cuttles inside.

When the hatchlings are born they are tiny and measure less than 0.6 cm long, but they can grow to an 2.5 cm long within about two months and to about 10 cm (total length) within six months.

Sepia bandensis only live about a year and they die as many cephalopods do, via senescence. Senescence, in cephalopods, is where they enter the final stage of their life and essentially waste away until death. They become listless and their eyesight and coordination starts failing (the start of this stage often begins with a clouding of their eyes) making escaping their many predators and hunting, or even accepting food placed directly into their arms, difficult if not impossible. In captivity sometimes their arms and body will even begin to rot in place. There are even reports of crabs feeding on still living cuttles as well, who showed no signs that they are even aware of what was happening. In the wild, cuttlefish going through senescence don’t last long, as most are snapped up quickly by predators.

Many people would like to keep cuttlefishes as pets. This is quite easy in the UK and Europe as species of cuttlefish like Sepia officinalis, the ‘European cuttlefish’, are found there.

In the US however, we have no naturally found species and stumpy-spined cuttlefishes are the most commonly imported species from Bali which are poor travelers and normally arrive as four-inch adults with perhaps only weeks to live. In short, they are not recommended as a pet. See TONMO for more information about keeping cuttlefishes.