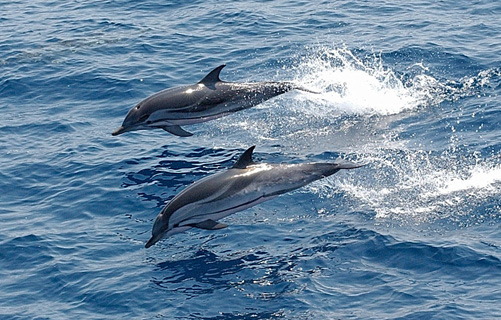 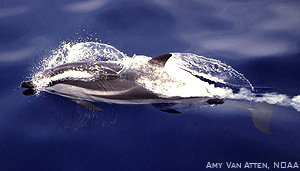 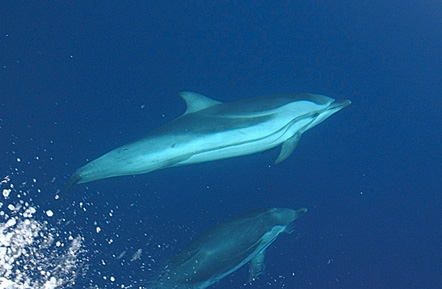 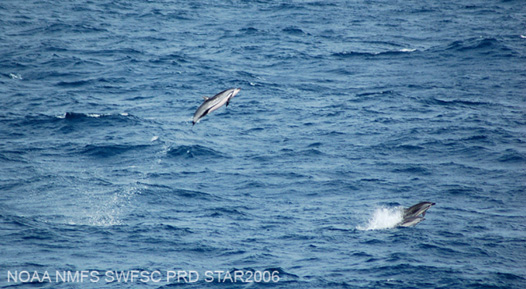 Striped dolphins, Stenella coeruleoalba (Meyen, 1833), aka blue-white dolphins, range in body lengths from 2.2-2.4 m and have a fusiform (tapers at both ends) body, like all dolphins, with tall dorsal fins, long, narrow flippers, and a prominent beak. They are named for their characteristic stripe patterns. They are blue-gray in color with a dark dorsal cape and light coloring on their ventral (under) side. A blue-black stripe extends along the length of their body, and they have black stripes on their flippers.

Striped dolphins are very agile and are known to breach (jump out of the water), bow ride, and “roto-tail” = a behavior where they make high arcing jumps then rapidly rotate the tail several times before re-entering the water.

Striped dolphins communicate using clicks and whistles like many other dolphins.

Striped dolphins, Stenella coeruleoalba, are found in warm-temperate and tropical seas throughout the world including: the Mediterranean Sea, Pacific Ocean, Atlantic Ocean, Indian Ocean, Caribbean Sea, and in the northern Gulf of Mexico. Striped dolphins occupy both offshore and inshore waters above 20°C.

Male striped dolphins, Stenella coeruleoalba, reach sexual maturity between ages 7-15, females between 5-13 years. In the western North Pacific range of the striped dolphin, mating season takes place in winter and in early summer. In the Mediterranean, mating season takes place in the fall. The gestation period lasts between 12-13 months during which time fetuses grow at an approximate rate of 0.29 cm/day. Newborns measure 0.9-1 m in length and weigh about 11.3 kg. The nursing period lasts for about 16 months. Females typically have a four year calving interval, resting for 2-6 months between lactation and the next mating season.