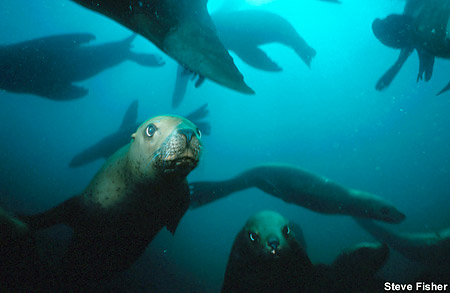 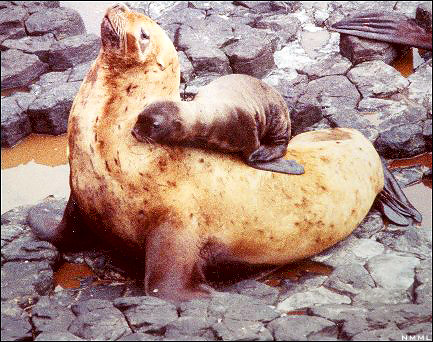 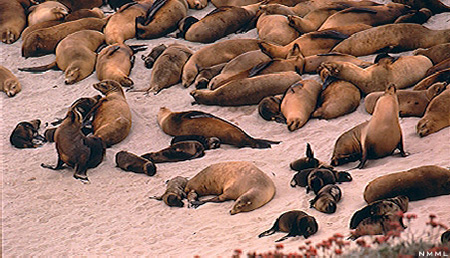 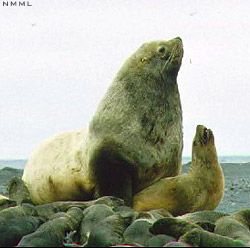 In 2000, Steller sea lions were estimated to have a global population of about 85,000, a decline of more than 50% since 1960 when an estimated 240-300,000 Steller sea lions lived worldwide. This sea lion can be found from the North Pacific Ocean from California to northern Japan. There are two distinct populations separated by genetics. The “western population”, which lives in the Gulf of Alaska, Bering Sea, Russia and small numbers in Japan, and the “eastern population”, which lives from California, to Oregon, British Columbia, and Southeast Alaska. Individuals have been known to wander as far south as the Bohai and Huanghai Seas in China.

Some Steller sea lions, particularly juveniles and adult males, disperse widely outside the breeding season sometimes traveling up to thousands of kilometers away from the breeding site. Movement among the 2 populations is limited.

Steller sea lions forage near the shore for fish such as: walleye pollock, herring, capelin, mackerel, rockfish, and salmon; and cephalopods such as squid and octopuses. They have been known to eat northern fur seal pups, harbor seals, and ringed seals on occasion as well.

Predators include sharks and orca (killer whales). Predation by Arctic foxes on pups has also been observed in the Russian Commander Islands.

Although they are not typically deep divers, one individual has been observed diving to a depth of over 400 m.

Female Steller sea lions, Eumetopias jubatus, reach sexual maturity between 3-8 years, males between 3-7 years, however males do not become territorial around until they reach 9-13 years. Breeding season lasts from mid-May to mid-July. Dominant males arrive early to establish territories on the breeding rookeries on exposed rocks and beaches. These rookeries often have adjoining haulout sites and some rookeries are used as haulout sites when breeding season is over. Females give birth about 3 days after arriving at the rookery. Steller sea lion pups are born measuring about 1 m in length and weighing 16-23 kg with a thick, dark-brown coat that will be shed in 4-6 months for a lighter brown coat.

Although the eastern population (California, to Oregon, British Columbia, and Southeast Alaska) has remained stable at an estimated 39,000 for the last few years, the western population (Gulf of Alaska, Bering Sea, Russia and small numbers in Japan) of Steller sea lions has been declining rapidly. In 2000 there were only about 45,000 Steller sea lions left in the western population. In 1997 the population of the Steller sea lion west of 144°W (Cape Suckling, Alaska) was reclassified as Endangered under the Endangered Species Act; the rest of the population has been classified as Threatened since 1990. The species is also listed as Depleted under the United States Marine Mammal Protection Act, protected from intentional killing in Canada by the Fisheries Act, and listed as Endangered on the IUCN Red List.

The cause of the decline in the western population of Steller sea lions is unknown. One theory is that food resources have declined as commercial fisheries have increased fishing for groundfish. This theory is a result of the fact that 50-80% of trawl fishery catches in the US have been caught in the sea lion’s habitat and consists largely of sea lion prey. For example, in December 1998, an official US government Biological Opinion concluded that walleye pollock fishing off the coast of Alaska would deplete that species enough to jeopardize the continued existence of the western population of Steller sea lions. In December 2000, another report concluded that competition with fisheries that target Steller sea lion prey in the Bering Sea, Aleutian Islands, and Gulf of Alaska is also a significant factor in population decline. Continued fishing for groundfish at current quotas such as: pollock, Atka mackerel, and Pacific cod, are also likely to jeopardize the western population of Steller sea lions.

To address the population decline of this species, no-trawl buffer zones of 10 nm (nautical miles) and 20 nm around some Steller sea lion rookeries were established by the US in 1990, and transit within 3 nm of rookeries west of 150°W is banned all year round. Furthermore, in 1999 and 2000 the US issued emergency interim rules expanding the number of seasonal and year-round trawl exclusion zones for pollock around important rookeries and haulouts. The rules also implemented measures to disperse pollock fishing effort, both temporally and spatially, and closed the Aleutian Islands to pollock trawling. Further restrictions were placed on the Aleutian Islands fishery for Atka mackerel, an important Steller sea lion prey species in some areas.

In spite of these efforts, environmental groups are calling for further restrictions out of concern that the current actions will not adequately protect the habitat and food supply. In July 2000, action by 3 environmental groups led to a U.S. federal court ruling to ban all groundfish trawl fishing within 20 nm of designated Steller sea lion critical habitat rookeries in Alaska to protect Steller sea lions from loss of prey. In November-December 2000, however, an Alaskan Senator influenced by the fishing industry introduced a “rider” to a US Congress appropriations bill preventing full implementation of the management measures and limiting the government’s ability to restrict the groundfish fisheries.

Commercial hunting of Steller sea lions ended in the 1970s. However, in Canada, 87 Steller sea lions were legally killed by British Columbia fish farming industry under the predator control permits, mostly in the Vancouver Island area. Subsistence hunting accounts for approximately 400 Steller sea lions in Alaska each year, mostly from the western population. This species is also at-risk of entanglement in commercial fishing nets, which kills an estimated average 30 sea lions yearly. At the southern end of the Steller sea lion range, population numbers have also been declining in recent years likely due to reduced prey availability, environmental contamination, and disease.

Climate change also threatens these animals. Steller sea lions in Alaska may have been affected by the 1997-98 El Niño although it is not known yet to what extent. Warmer temperatures in the Bering Sea alter ocean currents and atmospheric conditions, which may also be affecting the species. Marine traffic also poses a threat to Steller sea lions. For example, in May 1999 a 24 m fishing vessel ran aground on the rocks of Unimak Island in the Aleutian Islands losing large volumes of diesel fuel and lubricating and hydraulic oils and a 54 m freighter ran aground east of Unimak Island, leaking up to 400 liters of lubricating oil. A number of Steller sea lion haulout and rookery sites were affected by the Exxon Valdez oil spill in Prince William Sound, Alaska, in 1989 but it is unknown whether the spill impacted the population. High levels of the antifouling paint tributyltin (TBT) have been found in Steller sea lions around Hokkaido.