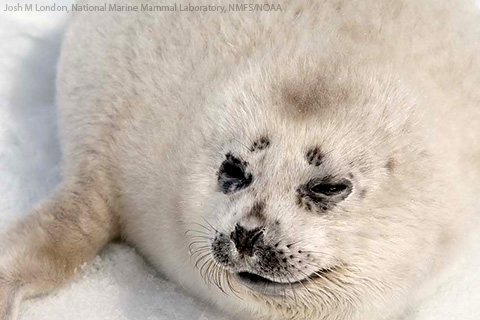 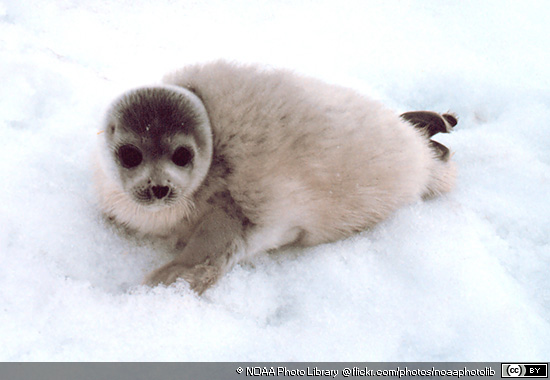 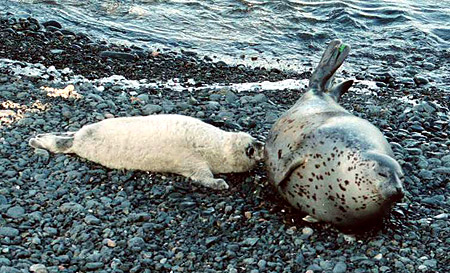 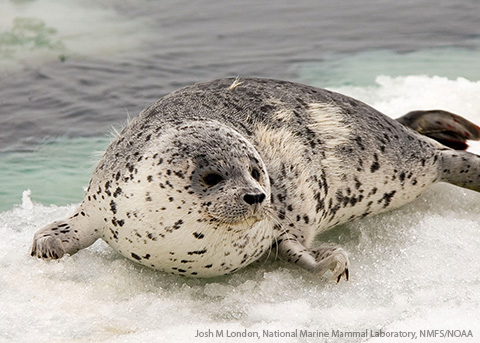 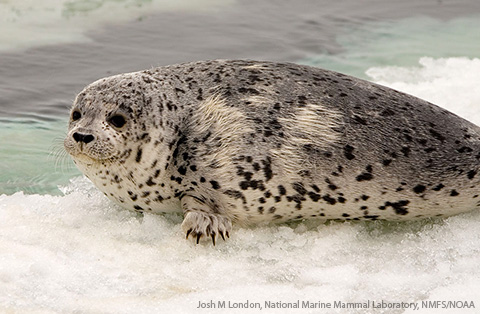 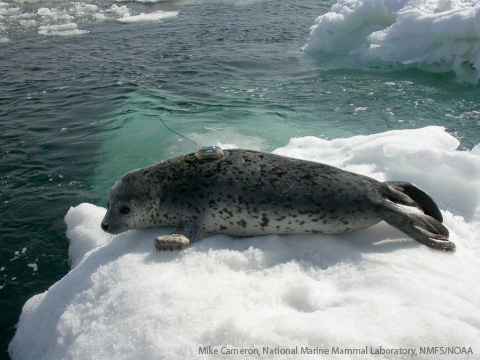 Spotted seals, Phoca largha (Pallas, 1811), aka Larga seals, vary in size among their different populations. On average, adult males measure 1.5-2.1 m in length and weigh 85-150 kg, and adult females measure 1.4-1.7 m in length and weigh 65-115 kg. There is also variation in the coloring of adult coats, but generally spotted seals are silvery-gray on their ventral (under) sides and darker gray on their backs with dark spotted patterns. Spotted seals can live to at least 35 years of age.

Phoca largha is closely related to harbor seals, Phoca vitulina, and often shares the same habitat. There is also some evidence of inter-breeding between these 2 species.


Spotted seals, Phoca largha, are found around the ice and waters of the north Pacific Ocean and adjacent seas, including the continental shelf of the Beaufort, Chukchi, Bering and Okhotsk Seas and south to the northern Huanghai Sea and western Sea of Japan. Recent population data is unavailable, and estimates from the 1970s of 335,000-450,000 seals are likely inflated. A more recent survey of the Okhotsk Sea in 1986 and 1987 estimated 50,000 seals there.

Spotted seals gather to molt in late spring-early summer among the ice remnants or on land when as the ice retreats. Following molting, spotted seals in the Okhotsk and Bering Seas disperse, some migrate north to the Beaufort and Chukchi Seas, others to the south and east. Little data exists on the distribution and movements of spotted seals during the colder months; it is likely though that they remain in the water during the winter.

Spotted seals feed on a wide variety of food sources including crustaceans, cephalopods, and fishes such as: herring, capelin, pollock, eelpout, sand lance, and cod. The diet varies by age, by region, and by season. Known predators are sharks, orca (killer whales), walruses, Steller sea lions, polar bears, brown bears, wolves, foxes and some large birds. Adult spotted seals can dive to depths of over 300 m.

Breeding season takes place during Spring when spotted seals, Phoca largha, are found at the southern edges of the pack ice near cracks between ice floes for access to air and the surface. Known breeding areas are in the Bering Sea, Okhotsk Sea, Sea of Japan and Bohai Sea (where some seals give birth on land). Females reach sexual maturity at 3-4 years of age, males at 4-5 years. Newborn pups measure 75-90 cm in length and weigh 7-12 kg. Pups are born February- May, depending on the region, with a woolly white coat that is molted 4-6 weeks later (2-3 weeks in Japan) around the same time the pup is weaned. The pup remains on the ice or on land for the first few weeks after it is weaned, then gradually learns to dive and feed, diving up to 80 m. The pup mortality rate for the first year is around 45%. Families of three seals are often observed during breeding season consisting of a female, her current mate, and her pup, likely sired with a different mate, from the previous breeding season. It is likely that the males join the females about 10 days before she gives birth, then the pair mates after her pup is born.

As with other Arctic species, the spotted seal is threatened by climate change because their habitat consists of the ice front at the southern edge of the sea ice, an area that may change due to global warming forcing all seal species in the region to redistribute. This may reduce the food resources available or put the seals in closer contact with predators. Oil and gas exploration and extraction in the region may cause disturbance to spotted seal populations as well as environmental contamination of the habitat and food sources due to oil spills. Reduced fish stocks including pollock and herring in the Bering Sea due to commercial fishing may also cause declines in populations of spotted seals as well as other species in the region including Steller sea lions, harbor seals, and northern fur seals. Spotted seals are also caught as bycatch by fisheries and some have been killed by fishermen for preying on catches in fishing nets. In Russia, spotted seals are hunted for food to feed foxes on fur farms. Subsistence hunters also kill spotted seals. The annual kill is estimated at 2,500 with a maximum quota of 15,000. In the 1990s about 2,000 spotted seals were killed each year by Alaskan native subsistence hunters, mostly in the Bering Strait and Yukon-Kuskokwim regions.

Commercial hunting of spotted seals has ceased in Japan, although the seals are still hunted there on occasion. Spotted seals also die in salmon trap nets along the Nemuro Peninsula. The spotted seal is listed as nationally endangered in China; it is the only pinniped that breeds in that country. The only spotted seal breeding site in China is found at the Dalian Seal Sanctuary, a nature reserve established in 1992 at Liaodong Bay in the Bohai Sea, however these seals remain at-risk of illegal hunting, entanglement, loss of habitat, disturbance, and reduced food supply.