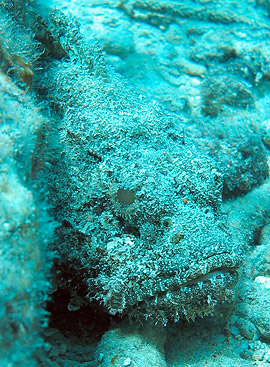 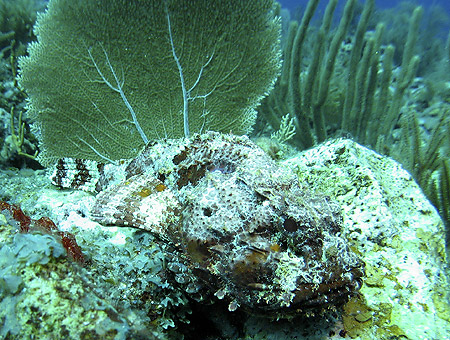 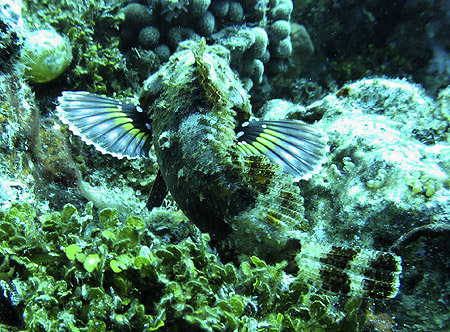 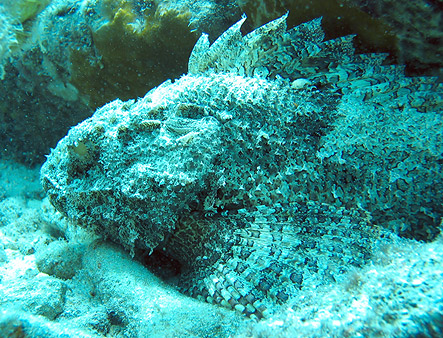 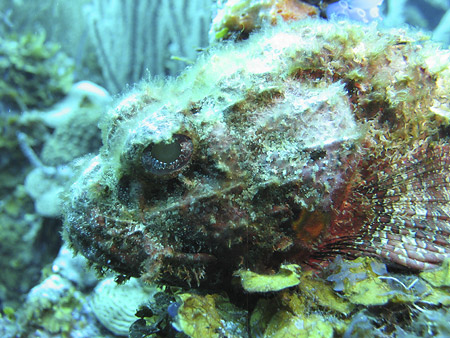 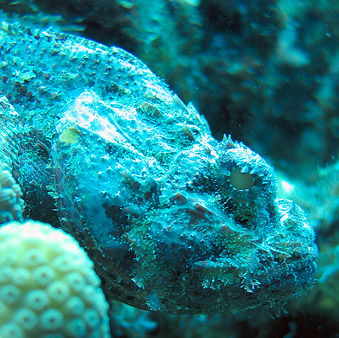 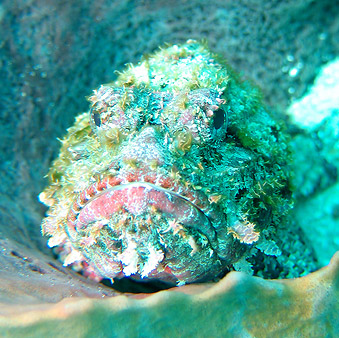 Spotted scorpionfishes, Scorpaena plumieri (Bloch, 1789), aka gurnards, lion fishes, Pacific spotted scorpionfishes, prickly hinds, St. Ann’s bays, and stinging groupers, are formidable looking creatures underwater particularly given that these creatures have venomous spines used for defense. These scorpionfishes have very effective camouflage capabilities. They have fleshy plumes (cirri) over their eyes, which combined with the characteristic skin flaps around their head and their mottled wide-range of brown coloring makes them blend into reef or rocky bottoms so that they become virtually invisible. This species also has brilliant white spots on black on the insides of their pectoral fins (hence their name) which are only displayed when threatened or swimming. Another distinctive feature includes three dark bars on their tails.

Spotted scorpionfishes are one of the largest and most common scorpionfishes in the Atlantic and Caribbean. Typically 18-36 cm in length with males measuring up to 45 cm and weighing about 1.55 kg.


Spotted scorpionfishes, Scorpaena plumieri, can be found in the Western Atlantic from Bermuda, Massachusetts, and the northern Gulf of Mexico to southern Brazil. In the Eastern Atlantic they are found around Ascension and St. Helena. 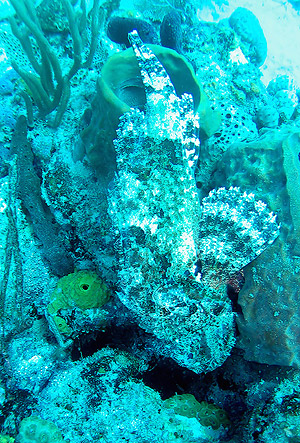 They most commonly inhabit shallow coral reefs but are found in all bottom habitats. They are most commonly found lying motionless blending in with the background between depths of 5 m to at least 55 m.

Spotted scorpionfishes feed mostly on other fish and crustaceans. They are ambush predators using their camouflage to remain undetected by prey until they are within striking distance. This species has a wide, cavernous mouth used to quickly suck in and swallow prey. Predators of spotted scorpionfish include large snappers, sharks, rays and moray eels.

Data on the reproductive behavior of spotted scorpionfishes is limited, however it is known that their minimum population doubling time is more than 14 years.

The white spots on the topside of the pectoral fins of spotted scorpionfishes, Scorpaena plumieri, are visible when the animal is disturbed. Like other scorpionfishes, this species has pressurized venom glands at the base of its dorsal fin. 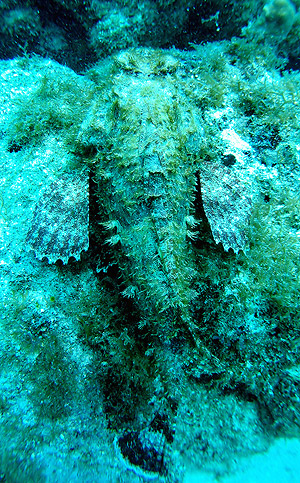 Scorpionfishes inject their venom into predators through their dorsal spines upon penetration. Their venom causes severe pain but is not usually fatal to humans, however medical treatment should be sought immediately for victims. Divers can avoid contact by not resting on the bottom or reefs and being very careful where they put their hands.