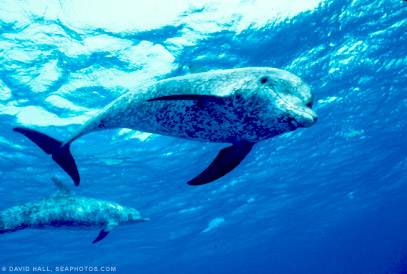 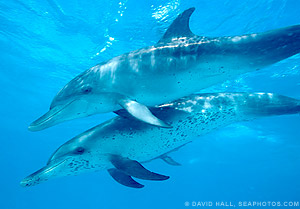 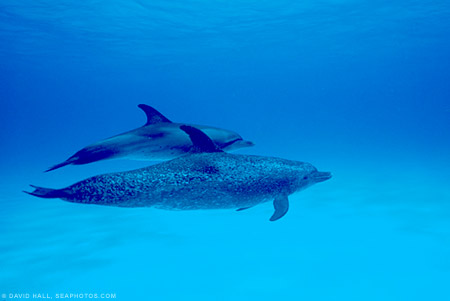 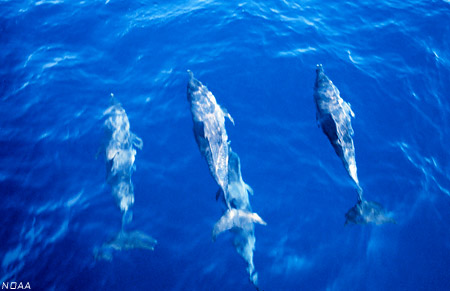 There is also the Atlantic spotted dolphin, Stenella frontalis (G. Cuvier, 1829). Both species are often confused and are often also called Gulf Stream dolphins, Gulf Stream spotted dolphins, spotted porpoises, bridled dolphins, spotters, and long-snouted dolphins, etc. Both are named “spotted dolphins” due to the spotted patterns on their bodies that usually grow denser with age. They differ regionally by size and color, and tend to be more heavily spotted in the eastern Pacific than in the Hawaiian Islands where they have virtually no spots. The spotted dolphins of Japan and the eastern Indian ocean are moderately spotted. Spotted dolphins have a long slim beak with 35-48 small conical teeth in each side of the upper jaw and 34-47 small conical teeth in each side of the lower jaw. The spots begin to appear at the onset of weaning as dark blotches on the ventral surface. Closer to puberty, the spots increase in number and size and pale spots on the dorsal side begin to appear. Spotting varies among these species. Those with very dense light spots can appear white from a distance.

Stenalla frontalis, or the Atlantic spotted dolphins, have a long slender beak typical of spinner dolphins. This species has a stocky head and body and larger flippers, flukes, and tail than than spotted dolphins, Stenella attenuata, making them slightly larger in size. The average adult body length of the Atlantic spotted dolphin is 1.66-2.29 m, and females tend to be lightly larger than males. The average weight is approximately 90 kg. In spite of the larger size, it is often difficult to distinguish these 2 species when their ranges overlap.

Atlantic spotted dolphins are agile swimmers known to flip and leap from the water. They communicate using whistles that are distinguishable among individuals by humans. They also communicate with clicking and other sounds. This communication is sometimes used when the animal is in distress. The Atlantic spotted dolphin, like other dolphin species, will support wounded or sick animals in the water until they recover or die.

Pantropical spotted dolphins, Stenella attenuata, live mainly in tropical or warm waters, and are found in the Atlantic, Pacific and Indian Oceans. They are often seen around islands and there are populations in the eastern tropical Pacific, the western North Atlantic, the Gulf of Mexico and around Hawaii.

Pantropical and Atlantic spotted dolphins feed on invertebrates like squid and octopuses as well as a wide range of fishes like eels and herring.

Spotted dolphin females reach sexual maturity at 9 years, males at 12 years. They are thought to mate year round. Calves are born in May and September following a gestation period 11-12 months.

Spotted dolphins are not threatened with extinction, however commercial trade of this species may be impacting its evolution and sustainability.