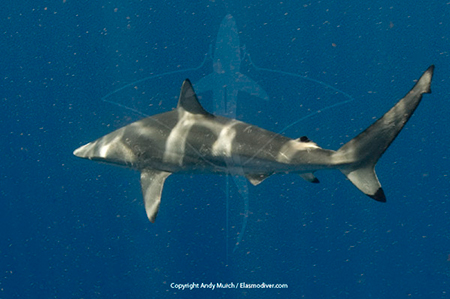 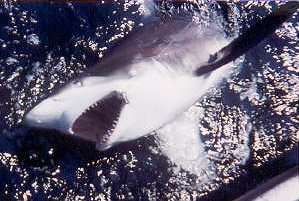 Spinner sharks, Carcharhinus brevipinna (Müller and Henle, 1839), aka blacktipped sharks, great blacktip sharks, large blacktip shark, long-nose grey sharks, are large sharks with slender bodies, long, pointed snouts and small eyes. They are named for their agile and fast swimming behaviors such as leaping and spinning displayed during feeding. Spinner sharks share common physical characteristics with blacktip sharks. The most obvious difference is the position of the first dorsal fin which is closer to the anterior part of the body in spinner sharks, and is located behind the pectoral fins. The first dorsal fin of the blacktip is closer to the midsection of the body. In spinner sharks, the first dorsal fin is slightly curved and has a short rear tip. There is also a second second dorsal fin, with a short rear tip. The spinner shark does not have an interdorsal ridge. The narrow, curved pectoral fins have pointed or rounded tips, and the slender caudal fin has a narrow rounded tip. Like the blacktip, adult spinner sharks have black or dark gray tips on the second dorsal, anal, pectoral fins and on the lower lobe of the caudal fin. On occasion, the pelvic and first dorsal fins and the dorsal caudal lobe are also black-tipped. Unlike the spinner shark, the tip of the anal fin of the blacktip is not black. Spinner sharks are gray to bronze on the dorsal side with a pale ventral side and faint white bands on the flanks.

The teeth of spinner and blacktip sharks also differ. The blacktip has broad teeth that recurve forward. Spinner sharks have 15-16 narrow, triangular teeth in their upper and lower jaws. The edge of the lower jaw has a distinct notch, and the teeth of the lower jaw are more slender. The tips of the teeth are not recurved forward, but slightly oblique.

Spinner sharks reach a maximum total length of 3 m and a maximum weight of 89.7 kg. However, the average size of these sharks is about 1.95 m and 56 kg. Female spinner sharks mature at 1.7-2.0 m and males mature at 1.6-2.0 m. Upon reaching maturity, the spinner shark grows approximately 5 cm/yr, reaching maximum size at 10-20 years of age. This species is generally smallest in the northwestern Atlantic and largest in the Indian Ocean and Indo-West Pacific.

Spinner sharks, Carcharhinus brevipinna, are found in subtropical waters between 40°N and 40°S near continental and insular shelves. Spinner sharks inhabit waters between 0-100 m. They are a highly migratory species in the Gulf of Mexico, where it moves closer inshore in spring and summer months to reproduce and feed.

Spinner sharks, Carcharhinus brevipinna, are viviparous, meaning females give birth to 3-15 pups after they are nourished by her yolksac/placenta during gestation for 12-15 months. Pups measure about 60-75 cm on average. Females give birth in inshore waters off the coast of the US during summer months, and pups then move to shallow waters for protection from predators. According to one study, the spinner shark grows approximately 20 cm during the first 6 months of life in waters off the Florida Atlantic coast.

The spinner shark, Carcharhinus brevipinna, is not dangerous to humans unless provoked. Because of its small teeth and preference for small fish, the spinner shark is not aggressive toward larger animals, however the International Shark Attack File has recorded 13 unprovoked bites to humans, none of which resulted in death. Spinner sharks are caught by longlines and as bycatch by commercial fisheries for the flesh, skin, and fins.

Spinner sharks are listed as Near Threatened (NT) on the IUCN Red List of Threatened Species: