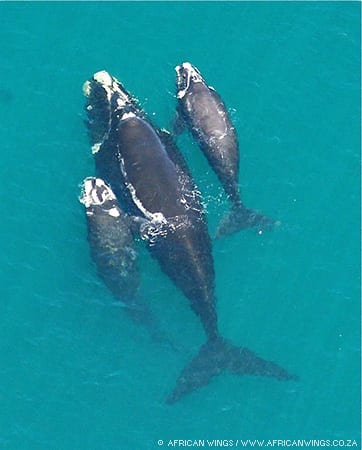 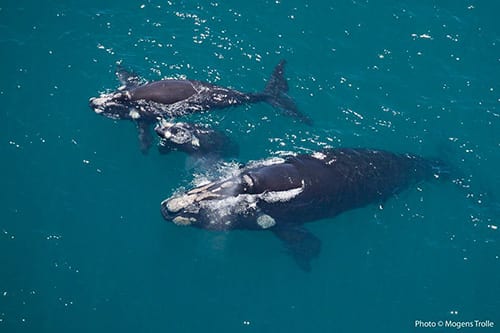 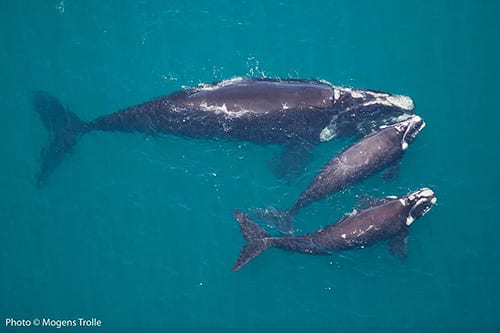 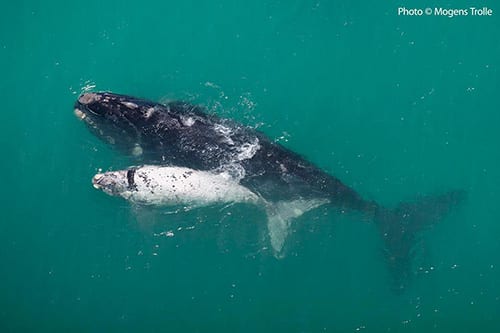 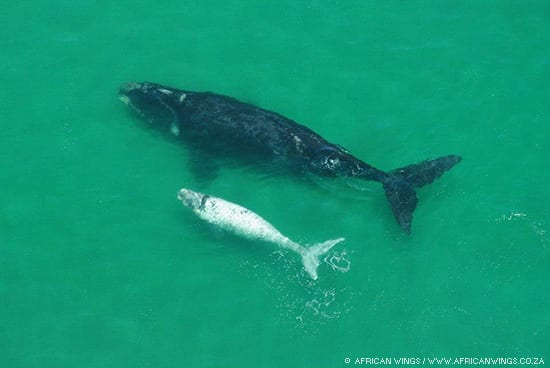 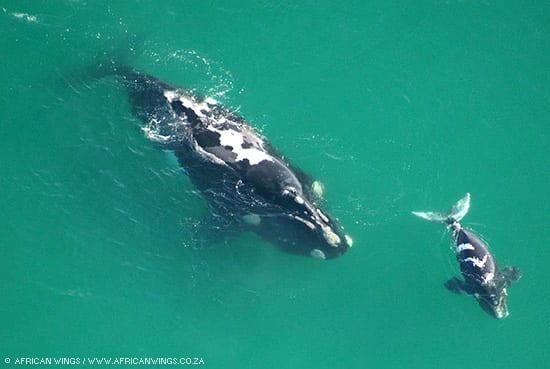 Southern right whales, Eubalaena australis (Desmoulins, 1822), are characterized by their uniformly dark color and white callosities found on and around the head. They are generally the smaller of the three right whale species (see the North Atlantic right whales, Eubalaena glacialis and North Pacific right whales, Eubalaena japonica). Callosities, which are outgrowths of tough skin, are often used in identifying individual whales, as they are unique to each animal, similar to fingerprints in humans. The largest of these excrescences (callosities) is located on the anterior-most portion of the head and is referred to as the “bonnet.” Other excrescences are on the upper edge of the lower jaw, behind the blowhole, and above the eye.

Eubalaena australis is on average between 16-18 m long at maturity, males being slightly shorter than females. It has a rotund appearance, a very large girth relative to the length, with an enormous head (approximately 1/3 the body length). Southern right whales do not have any dorsal fins, nor do they have the grooved throat that is typical of the balaenopterids. The flippers are also broad and relatively short.

Eubalaena australis produce short, low frequency moans and pulses. Also heard, often below and above the water’s surface, are the blows of the southern right whales. However, the most common sound produced is a belch-like utterance that averages 1.4 seconds long at a frequency of less than 500 Hz. These whales also produce simple moans in a narrow range of frequencies and complex moans that shift frequencies and overtones. Other sounds created by southern right whales are those caused by the slapping of theirs fins and tails, while rolling over at the surface of the water—usually occurring during mating courtships.

In a common behavior among these whales, called “headstanding”, they assume a vertical position and extend the flukes into the air, often rocking back and forth, for as long as two minutes at a time. Research initially indicated that this position was used for feeding on benthic organisms, however is more recently believed to be either a resting position or a courtship stimulus. Southern right whales are also commonly seen breeching—turning in midair and falling into the water with the side or back of the body. This behavior may dislodge parasites from the whale’s surface, but is also a display mechanism during mating.

Using their long and numerous baleen plates, southern right whales feed on small plankton, including pelagic larval crustaceans and copepods. They are most often observed using one of two feeding techniques. The first, surface feeding, occurs when the whales selectively swim through densely-populated plankton slicks with their mouths wide open and baleen exposed. The other method occurs while submerged, presumably in highly dense populations of plankton.

Southern right whales, so named because they were historically considered the “right” whale to catch (because they are slow-moving and are usually near the surface), reach reproductive maturity at approximately 10 years of age. The gestation period ordinarily lasts for 1 year, and lactation continues for 4-6 months. Calves, which are born weighing 1,000-1,500 kg and are 5-6 m long, grow at a rate of 3 cm per day.

Southern right whales mate and calve between 20-30°S and mostly in protected bays during the months of June-November. They are polygamous, having up to 7 males per one female. Courtship and copulation is described as being tender and graceful. The duration of courting varies, but usually lasts between 1-2 hours, after which the males and females separate from one another. There seems to be no animosity between males mating with the same female, which is unusual for mammals. It is believed that this passive behavior implies intra-uterine sperm competition.

Southern right whale populations are showing a slow increase since international protection in 1935, when over-exploitation nearly eradicated the species. There are estimated to be approximately 3,000-4,000 currently surviving in the southern hemisphere. Aside from international protection, individual countries are also protecting these whales and improving their ability to survive and reproduce.

In Brazil the Right Whale Project has been in effect since 1981. The program’s goal is to protect the whales in their breeding grounds off the coast of South Brazil. Program participants monitor and research the current situation, and inform the public about the importance of environmental protection. Since its establishment, the program has, among other beneficial actions, gotten the government for the State of Santa Catarina to declare southern right whales as a state natural monument, thereby assuring its full protection.

Other countries have also vowed to minimize human impacts on whale populations. This idea has been followed through by reducing direct disturbance and coastal industrial activity, as well as increasing awareness of the hazards of oceanic dumping that may lead to bioaccumulation and possible extinction.