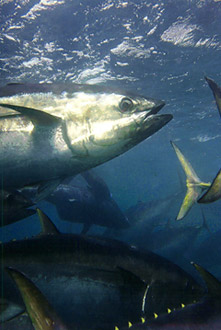 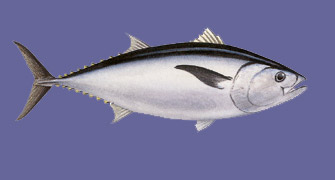 Southern bluefin tuna, Thunnus maccoyii (Castelnau, 1872), are a very large species commonly caught by Indonesian and Japanese commercial long-liners in the Indian Ocean, their spawning ground. If a southern bluefin tuna reaches adulthood (when they are about 12 years old) before they’re caught, they can grow up to 2.45 m and weigh up to 260 kg. These fish have swim bladders and are silvery white in color on their lower (ventral) side. Their first dorsal fin is either yellow or blue and their anal fin and finlets are dusky yellow-edged with black. Their median caudal keel is yellow in adults. They are marked with colorless transverse lines and rows of colorless dots. Southern bluefin tunas are a large pelagic species that lives between 20 and 40 years of age.

Thunnus maccoyii can be found in the Atlantic, Indian and Pacific Oceans in both temperate and cold seas, primarily between 10°S and 50°S, to nearly 60°S. They are pelagic (open water) with a depth range between 0-50 m. They prefer to inhabit temperate waters that are between 5-20°C.

Southern bluefin tuna, Thunnus maccoyii, are opportunistic feeders that prey on a wide variety of fishes, crustaceans, cephalopods, salps and other marine animals.

Thunnus maccoyii are often caught near their spawning grounds in the Indian Ocean. During spawning, the adult fish migrate to tropical seas, off the west coast of Australia, up to 10°S. Spawning fish and larvae can be found in waters with surface temperatures between 20-30°C. They have a minimum population doubling time of 4.5 – 14 years, making the southern bluefin tuna a prime target for overfishing.

Southern bluefin tuna are a highly migratory species. If the current exploitation continues, the population will be below 500 mature individuals within the next century, which is a number far too low to be sustainable.