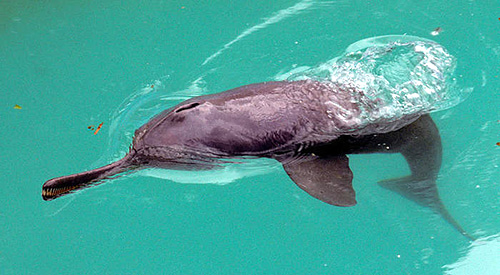 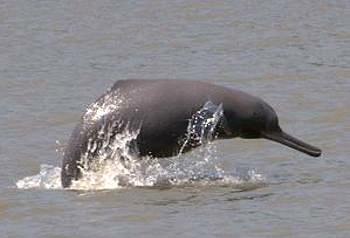 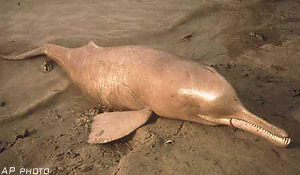 Ganges river dolphins, Platanista gangetica gangetica, aka susus, measure 2.3-2.6 m in length with females typically larger than males. They are dark gray to black in color with lighter coloring on their ventral (under) sides. Their unnotched flukes (tail) measures 46 cm from tip to tip. They have a beak that measures 18-21 cm with 28-29 teeth on either side of their jaws, and a steeply-sloped forehead. They have a dorsal fin, however it is ridge-like and not very pronounced. Their pectoral fins are squared instead of tapered on the ends. They do not have neck mobility, and, lacking a lens, their eyesight is very poor, incapable of forming images on the retina. This is likely due to the muddy waters they inhabit making acute eyesight unnecessary. They are able to detect light and locate prey mainly using echolocation.

Although schools of 3-10 individuals have been observed, Ganges river dolphins are not classified as gregarious as they are most commonly found alone.

The life span of the Ganges river dolphin is thought to be about 26 years.

Indus river dolphins are generally a solitary species; however groups of up to 30 dolphins have been observed. These dolphins are able to swim on their sides, which enables them to swim in very shallow water if necessary, although they are not known to be an acrobatic dolphin species. They are highly vocal though they rarely use their ability to make sounds to communicate. The sounds they do emit are described as intermittent pulses.

Ganges river dolphins, P. gangetica gangetica, are found in the muddy river waters of India, Nepal, Bhutan, and Bangledesh in the Ganges, Brahmaputra, Meghna, Karnaphuli, and Hoogli river systems. This freshwater species may migrate to tidal waters during the rainy season, and during the dry season they migrate away from areas where temperatures and/or salinity rise significantly.

Indus river dolphins, P. gangetica minor, are found in the Indus River in Pakistan. Their range has decreased significantly by human created barriers and changes to the rainfall pattern. They are found above the Kotri Barrage and below the Chasma, Trimmu, Sidhnai, and Islam Barrages.

Some paleontologists believe that river dolphins may have evolved during the Miocene era from marine-dwelling that eventually moved to estuaries and rivers with the rise and fall of sea levels. They appear to migrate seasonally along the river.

Ganges river dolphins, P. gangetica gangetica, use their echolocation abilities combined with their highly toothed, long snouts to feed on shrimp and fish.

Indus river dolphins, P. gangetica minor, also use their echolocation abilities and their long snouts to forage for many bottom-dwelling animals including fish and invertebrates. P. gangetica minor has been known to eat some species of catfish, herring, carp, gobies, mahseers, prawns, and clams. Captive individuals reportedly consume about a 1 kg of food each day. Has few, if any, natural predators, however, they are often hunted by local people.

Ganges river dolphins, P. gangetica gangetica, reach sexual maturity at about 10 years of age. In general, calving takes place between October and March following a gestation (pregnancy) period of 8-9 months. Females nurse for up to 12 months.

Indus river dolphins also reach sexual maturity at about 10 years of age, and are thought to mate year round as calves are born throughout the year. They have gestation periods of 8-11 months after which calves are born measuring about 1 m in length, which are about half the size of the mother’s body. Calves nurse for about a year. The exact lifespan of P. gangetica minor has not been documented; however it is thought to be quite long considering their latent (delayed) sexual maturity.

Ganges river dolphins, Platanista gangetica gangetica, are listed as Endangered A2abcde by the IUCN Red List of Threatened Species and CITES-Appendix I.

ENDANGERED (EN) – A taxon is Endangered when the best available evidence indicates that it meets any of the criteria A to E for Endangered (see Section V), and it is therefore considered to be facing a very high risk of extinction in the wild.

They are hunted both for their meat and oil. They are also threatened by entanglement in fishing gear during migrations and by dams that block the Ganges river dolphin from their migration routes.

Indus river dolphins are becoming increasingly rare for several reasons such as hunting, building of dams and barrages in the Indus river, and changing rainfall patterns. They have also been classified as endangered since the 1970s. Their current population is estimated at only several hundred dolphins, a number unlikely to sustain the species, and one that will create genetic problems.