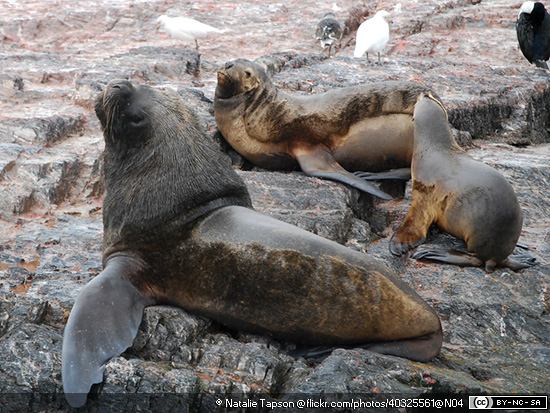 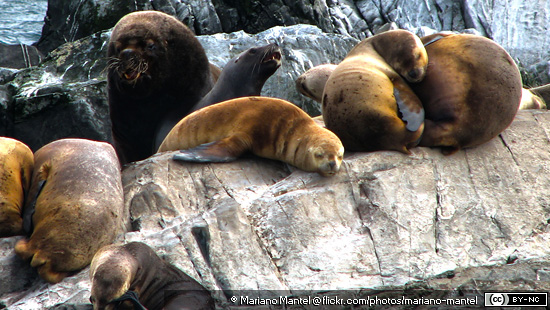 South American sea lions, Otaria flavescens, are found along the coasts and off-shore islands of South America from Zorritos in northern Peru to Ilha dos Lobos in southern Brazil, although wandering individuals have been found as far north as Ecuador and the Galapagos Islands. The total population is estimated at 265,000; 30,000 in Peru, 128,500 in Chile, 90,000 in Argentina, 12,000-15,000 in Uruguay, 3,000 in the Falkland Islands, and a few hundred in Brazil originating from the Uruguayan and Argentinean colonies. The populations in Uruguay and the Falkland Islands are decreasing while those in Argentina and Chile are increasing by 3% annually.
https://www.youtube.com/watch?v=2YEr_6OTWls

South American sea lion, Otaria flavescens, females reach sexual maturity at 4-6 years, males at 5-6 years, although males only first achieve territorial status at 9-10 years. Males arrive at the breeding colonies before females in late November-early December to establish territories that will eventually contain an average of 3-6 females. Less dominant males unable to establish territories are known to attack undefended females and pups, occasionally attempting to mount them, and in some cases killing them in the process. Pups are born about 3 days after the mother’s arrival at the rookery. Male pups are born weighing an average of 13.7 kg and measuring 82 cm in length, females are smaller, weighing an average of 12.3 kg and measuring 79 cm. Newborn pups have a black coat that will eventually turn brown to reddish-brown after a few months. The mother usually mates about 7 days after giving birth, and then begins the feeding cycle leaving her pup to feed at sea for 3 days then returning to nurse for 2 days. This cycle lasts for about 6-12 months. Pups begin swimming at about 3-4 weeks of age and are good swimmers by the time they are 2 months old.

After breeding season, males disperse wandering long distances as far as the South Pacific islands and as far north as Salvador, Bahia in northern Brazil.

Conflict with fisheries throughout their range causes problems for South American sea lions including reduced fish stocks, killing by fishermen to avoid damage to nets, and they are often caught as bycatch in gillnets and longlines, and entangled in trawl nets. The salmon farming industry in Chile is causing sea lion entanglements in the nets surrounding the farms fish farmers have been known to shoot sea lions to protect their stocks. In 1994, the Chilean banned the killing of South American sea lions for 5 years, extending the ban in 1999 for another 5 year period.

In 1997 Uruguayan fishermen were denied permission to cull the South American sea lion population there to protect fisheries. Controversy over culling also exists in Peru where Peruvian fishermen were accused of planning to cull the sea lion population and sell the male sea lion genitals to the Asian aphrodisiac market. Although the Peruvian Fisheries Ministry was considering a pilot program to kill up to 60 sea lions, the 1999-2000 El Niño event reduced the population and the plan was abandoned.

El Niño events have a dramatic impact on South American sea lion populations. In Peru and Chile it was reported that the 1997-98 El Niño drastically reduced sea lion populations from an estimated 180,000 to 30,000. The greatest loss of sea lions consisted of adult females, which will slow the recovery rate of this population. In northern Chile, the 1997-98 El Niño affected mainly pups and juvenile sea lions, which will also lead to a long-term slow recovery rate.

Environmental contamination from toxic chemicals and heavy metals has been identified in sea lions by scientists at the port of Mar del Plata, Argentina resulting in skin infections, conjunctivitis, rhinitis, and hair loss.