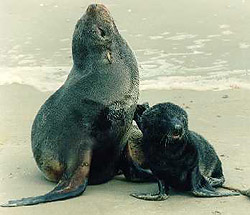 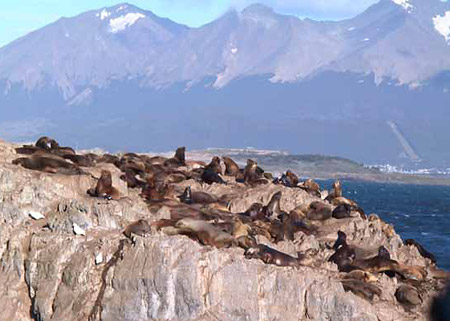 The total estimated population of the South American fur seal, Arctocephalus australis, is between 300,000-450,000 ranging from Peninsula Paracas in southern Peru to the coast of Rio Grande do Sul in southern Brazil. Exact regional population numbers are not available but estimates have been given of 5,000 in Peru, 104,000 in Chile (however this figure is likely lower due to the 1997-98 El Niño event), 20,000 in Argentina, and 15,000-16,000 in the Falkland Islands. Uruguay is thought to have the largest population, but an exact figure is unknown.

South American fur seal adults in Peru feed almost exclusively on anchovies, and juveniles there feed on demersal (living near the bottom of the sea) fish. In Uruguay their diet consists of anchovies as well as other fish species. In Brazil, this species is known to feed on shrimp and fish, and in Chile, lobster krill is the primary component of the South American fur seal diet. Lactating females tend to dive and feed at night to an average depth of 40 m for periods of about 3 minutes though otherwise they have been observed diving to depths of up to 170 m for up to 7 minutes.

Predators of South American fur seals include male South American sea lions preying on pups in Peru and Uruguay. They are also prey for sharks and orca (killer whales).

The breeding season for the South American fur seal, Arctocephalus australis, takes place from October-December. Females reach sexual maturity at 3 years, males at 7 years, however males do not begin breeding until about 8 years of age. The breeding adult males compete for territories and females. The South American fur seal often forms its territory in the intertidal zone so that they have access to water to cool themselves. Females travel with their pups between dry land and the water.

Newborn pups measure 55-65 cm and weigh 3.5-5.5 kg and they’re born with a black coat. About 5-10 days after her pup’s birth, the mother mates and then begins a feeding cycle going to sea for 3-5 days and returning to land to nurse for 1-2 days. The nursing period generally lasts 6-12 months, however nursing of a juvenile up to 3 years has been observed. The mortality rate of pups in the first year depends on the density of the breeding colony. In dense colonies, mother and pup are easily separated, and pups may be injured by aggressive adults. For example, in Peru, the mortality rate for 1 month old pups has been recorded as high as 31-49% in dense colonies, the highest newborn mortality rate of any fur seal population. An El Niño event in Peru reduced breeding densities lowering the mortality rate to 15% for newborn pups. Female South American fur seals are not migratory. Little is known about male migratory patterns outside the breeding season.

The South American fur seal, Arctocephalus australis, has been hunted for its fur, leather, and oil as early as 1515 in Uruguay. Hunting continued throughout the centuries, and records indicate that at least 750,000 fur seals were killed in Uruguay between 1873-1983, and 64,000 seals were killed for their fur in Chile between 1873 and 1907, and 9,600 between 1976-1979. Today, commercial hunting of South American fur seals was banned in Uruguay and no longer takes place anywhere within its habitat.

Uruguayan fishermen have called for a seal cull blaming South American fur seals for destroying their nets and stealing their catch. To counter this request, a pilot seal-watching initiative was launched in 1996 for tourists with hopes that income generated from this activity could reduce pressure for a cull. Unfortunately, the venture has not been commercially successful. The species has been protected in Peru since 1959 but poaching is still common there. There has been evidence in the past of fishermen in Chile and, to a lesser extent, Argentina, killing fur seals as bait for the king crab fishery, but it is not known if this practice continues.

South American fur seals have also been affected by El Niño events which reduce food availability by affecting the flow of the nutrient-rich Peruvian (Humboldt) current. The strong El Niño event of 1982-83 in Peru, for example, drastically decreased the pup birth rate in 1982 pup production and drove seals from the Peruvian population into northern Chile. Similarly, the 1997-98 El Niño event killed up to 80% of the adult females and pups in the Peruvian population, which is still struggling to recover.

Gillnets pose an entanglement problem for fur seals in Peru and Chile. Commercial fishing is also thought to decrease available food resources and has been blamed for the lack of growth in the Patagonian fur seal population. Anchovy stocks, a primary food source for South American fur seals, have declined in the southern Pacific Ocean.