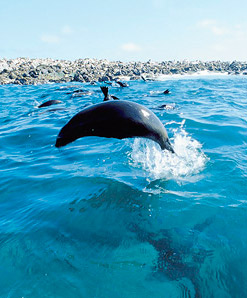 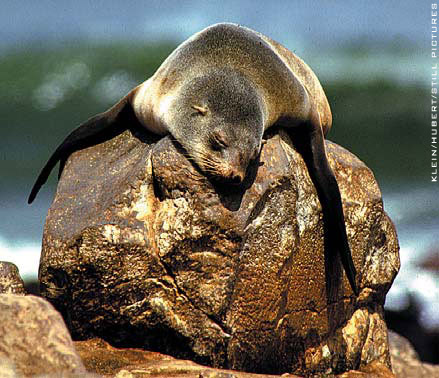 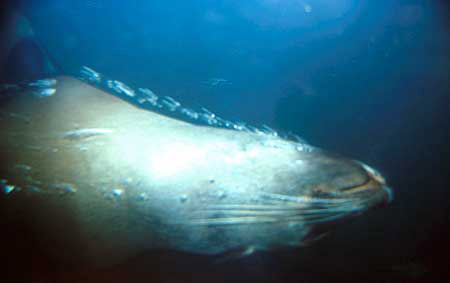 A. pusillus males measure 1.8-2.3 m in length and weigh between 200-360 kg, while adult females measure 1.2-1.7 m in length and weigh 35-110 kg. Adult males often have dark gray, dark brown, or light brown coats; females tend to have lighter coats. South African fur seals may live up to 25 years of age, while Australian fur seal males are known to live for about 19 years and females for 21 years.

South African/Cape fur seals, Arctocephalus pusillus pusillus, are found along the coast of Namibia on the African continent and along the western and southern coasts of South Africa. Breeding colonies range from Cape Frio, Namibia to the Angolan border, and down to Black Rocks near Port Elizabeth in South Africa. The population size of A. pusillus pusillus is estimated at 1.5-2 million, about two thirds of which is found in Namibia. The South African fur seal is not a migratory species.
https://www.youtube.com/watch?v=BnVk1bqFK8A

Australian fur seals, A. pusillus doriferus, breeding colonies are found on 9 islands in the Bass strait off the coasts of Victoria and Tasmania. The total population of A. pusillus doriferus is estimated at 30,000-50,000. The largest colony is found at Seal Rocks in Victoria. The non-breeding range of Australian fur seals extend from Kangaroo Island in South Australia to Tasmania and Port Macquarie in New South Wales.

South African fur seals feed up to 180 km offshore on pelagic schooling fish such as: sardines, anchovies, mackerel, and hake; as well as cephalopods and crustaceans. They also feed on sea birds occasionally such as: cape gannets, cape cormorants, and even penguins. They are opportunistic feeders with a foraging behavior similar to sea lions meaning they feed primarily on benthic (sea bottom) rather than mid-water pelagic (open water) species like other fur seal species.

South African fur seals are preyed on by sharks and orcas (killer whales). Pups on the mainland are also taken by the black-backed jackal and brown hyena. In Australia, the main predators are great white sharks and orcas.

Both South African and Australian fur seal breeding sites are found on rocky beaches on small islands and large colonies are found on the mainland on rocky and sandy beaches. Females reach sexual maturity 3-4 years, males at 4-5, however males do not begin breeding until they are 10-13 years of age. Adult males arrive at the breeding sites between late October-early November and fight for territories that will eventually contain an average of 7-30 females. Males remain on shore for about 6 weeks. Pups are born between early November-late December measuring 60-80 cm in length and weighing 5-6 kg with a black to brown coat. Male pups are usually slightly larger than females. About 6 days after giving birth, the females mate then begin the feeding cycle. The mother returns to sea to feed for 3-4 days then returns to nurse for 2-3 days. This rotation lasts for 8-10 months.

In Namibia, an annual commercial hunt for South African fur seals occurs between August-November. In 1999, the quota was 30,000 pups and 5,000 adult males. In 2000, the quota was nearly doubled with 60,000 pups and 7,000 adult males. The reason given for this increase by the Namibian government was that seal populations needed to be decreased to protect fisheries, in spite of the lack of evidence that culling populations is effective. Pups were/are killed with clubs, adult males are shot. These methods have been severely criticized by conservation groups who have gone as far as airing secretly-filmed footage on South African television.

Although cape fur seals have been protected in South Africa since 1893, they were still subject to government run or government authorized commercial “harvests” to 1990. The South African Sea Birds and Seals Protection Act of 1973 (SBSPA), provides broad protection for seals in South Africa, but also provides for “harvests”. While the conservation and harvesting of seals in Namibia was previously controlled by the SBSPA, this has been replaced by the Marine Resources Act (2000) which relaxed restrictions aimed at ensuring humane “harvests”.