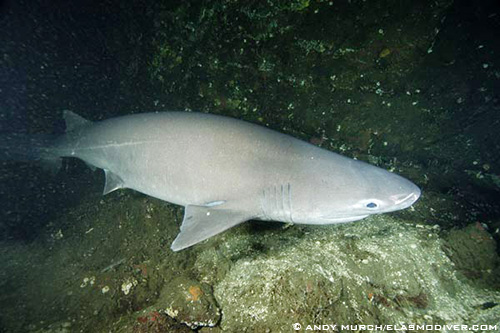 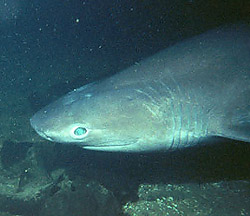 Sixgill sharks are members of the most ancient frill and cow sharks order, Hexanchiformes. Hexanchiform sharks have a single dorsal fin, either six or seven gill slits (versus the 5 found in all other existing sharks), and no nictitating membrane. Frilled sharks, Chlamydoselachus sp., are very different from the cow sharks and are likely to be moved to their own order Chlamydoselachiformes in the near future.

There are currently four known species of cow sharks:


A deepwater species (surface hunting at night to depths to 2,500 m during the day) of the outer continental and insular shelves and upper slopes. Juveniles may be found close inshore.

Dioecism, internal (oviduct) fertilization, ovoviviparous. The pups eat any unfertilized eggs and even each other, a behavior known as oviphagy. With other species very few pups in a litter survive until birth due to this form of sibling cannibalism. Litters are very large containing 22-108 pups. Size at birth 60-75 cm. Distinct pairing with embrace during mating.

A valuable food and sports fish, this species seems unable to sustain target fisheries and is als0 taken as bycatch (e.g., in Centrophorus liver oil fisheries now underway over large areas of the Indo-Pacific, etc.). Fisheries activity in parts of its range, including the Northeast Pacific, has led to the depletion of regional populations. Their liver is reported to be poisonous to eat. Marketed fresh, frozen, or dried salted; this species is also utilized as a source of oil and fishmeal.

Bluntnose sixgill sharks are not known to have attacked people without provocation though this large shark has been reported to scare a few deep divers.

Listed as Near Threatened on the IUCN Red List of Threatened Species: