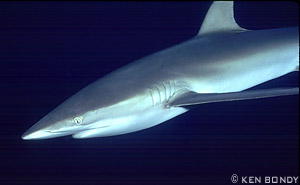 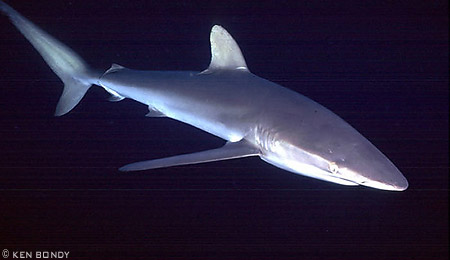 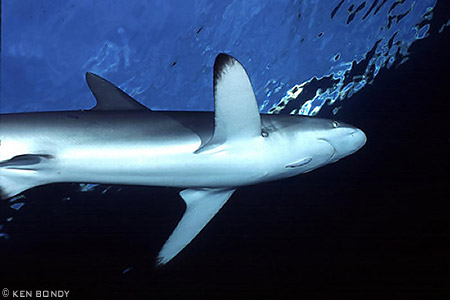 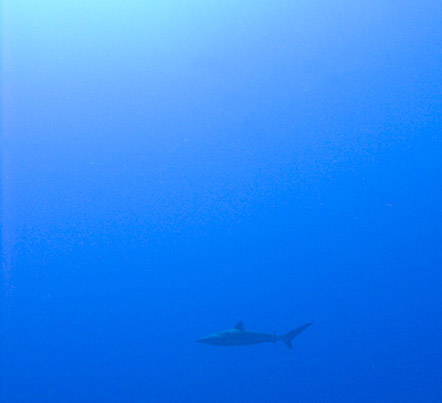 Silky sharks, Carcharhinus falciformis (Müller and Henle, 1839), aka silkies, blackspot sharks, grey whaler sharks, olive sharks, reef sharks, ridgeback sharks, sickle sharks, and silk sharks), measure up to 3.5 m in length with a maximum published weight of 346 kg. This species has a lifespan of about 23 years. Silkies are large, but slender sharks with long, flat snouts, large eyes, and small serrated teeth. Their second dorsal fin is low on their body and has a long rear tip. Silky sharks are gray to blue-gray on their dorsal (top) side, white on their ventral side (under). Silky sharks get their name because their “silky smooth” hide (the result of its densely-packed dermal denticles) and are also called “net-eater sharks” in the eastern Pacific because of their tendency to ravage tuna seine nets.

Silky sharks are quick and can be aggressive. They are solitary and often found near schools of tuna.


Silky sharks, Carcharhinus falciformis, are a highly-migratory species found in subtropical waters between 40°N-40°S in the western Atlantic from Massachusetts, USA, south to southern Brazil, in the Gulf of Mexico, and the Caribbean Sea. In the eastern Atlantic, silky sharks are found near Spain, northern Angola, and Cape Verde. In the Indo-Pacific there are a few records from the Red Sea and Natal, South Africa, China, New Zealand, and in the Caroline, Hawaiian, Phoenix, and Line islands. In the eastern Pacific, the silky is found near southern Baja California, Mexico, and northern Chile.

Silky sharks inhabit the continental and insular (island) shelves and slopes, deep water reefs, and the open sea. They are also occasionally sighted in inshore waters.

Silky sharks, Carcharhinus falciformis, feed primarily on fishes, as well as squid, paper nautiluses, and pelagic crabs. Tuna (little tunny and yellowfin), albacore, mullet, mackerel, porcupine fish, and various others including crabs have all been found in the stomachs silky sharks.

Silky shark, Carcharhinus falciformis, are viviparous (placental), meaning females give birth to live young. After about a 12 month gestation period, silky sharks usually produce between 2-14 pups per litter during late spring. Pups measure between 73-87 cm and spend their first few months in shallow water near reefs before moving offshore into open ocean.

Silky sharks, Carcharhinus falciformis, are considered dangerous to humans because of their aggressive nature and size. Silky shark have been observed with their head raised, back arched and tail lowered, a posture believed to be a form of threat display.

Silky sharks are of considerable importance to longline and gillnet fisheries in many parts of the world. In the Gulf of Mexico they are often caught as bycatch in the tuna fishery but are also harvested by the directed shark fishery. In the Caribbean they are sometimes fished, primarily by longline, but they are not a common catch. In the Maldives and Sri Lanka, they are the most important shark species, comprising 70-80% of the pelagic longline catch. In Japanese waters, silky sharks are a common target species of the shark fishery and are also caught as bycatch by the swordfish and tuna fisheries. In the mid-Atlantic waters of the US, the silky shark is fished on a limited basis, but not in significant numbers. The meat, oil, and fins of the silky shark are sold commercially. The silky shark is also fished by recreational fishermen. Like other sharks, the silky shark is vulnerable to overfishing because of its long gestation period, low number of offspring and slow growth rate.

Other than its importance to various fisheries, silky sharks have been used in various scientific studies to investigate the sensory biology of sharks.