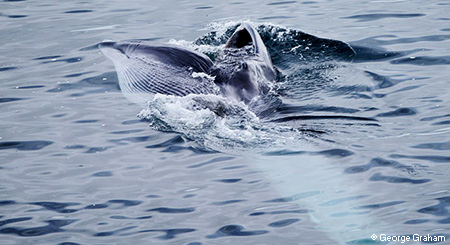 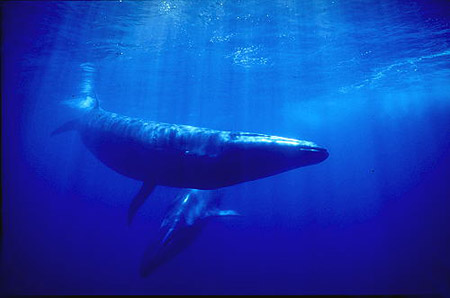 Sei whales, Balaenoptera borealis (Lesson, 1828), are slender cetaceans, although they are more robust than fin whales. They are rorquals, (Family Balaenopteridae, the largest family of baleen whales that also include blue whales, Bryde’s whales, fin whales, humpback whales, and minke whales), and these long, slender whales are much more streamlined than the other large whales.

There are two subspecies of sei whales:

Their dorsal fins are well-defined and slightly hooked and are located about two-thirds back along their body. Their head and jaws are rather narrow and slightly arched, unlike other rorquals. They are a mottled dark gray in color, with paler undersides (sometimes with irregular white markings) and between 38-60 throat grooves. They have 600-760 dark baleen plates, the longest of which is 78 cm with their fine inner bristles of these plates whitish in color. They are usually between 12.2-16 m long, with the longest recorded at about 20 m; females are generally larger than males and they weigh between 20,000-25,000 kg. Their snout is pointed and their pectoral fins are short. Their dorsal fins are sickle-shaped and range in height from 25-61 cm.

Sei whales tend to swim in pods of 3-5 animals, and rarely dive deeper than 300 m. Although little is known about how this species communicates, it has been found that low-frequency pulses are common among them.

Little is known about the actual social system of these animals. Groups of 2-5 individuals are typically observed, but sometimes thousands may gather if food is abundant. However, these large aggregations may not be dependent on food supply alone, as they often occur during times of migration. Norwegian workers call the times of great sei whale abundance “invasion years.” During the mating season, males and females may form a social unit, but strong data on this issue is lacking.

Sei whales are among the fastest cetaceans, swimming at speeds of up to 50 kph. Although distinguished by their speed, sei whales are not remarkable divers. These whales dive only to shallow depths, and they remain submerged only 5-10 minutes at a time.

Sei whales are found in virtually every ocean and sea in the world. However, they do not like extreme environments and are less likely to be found in polar waters than other rorquals. The subarctic and subantarctic are favored for summer feeding, but the majority of sei whales are found in temperate and subtropical waters, and annual migrations between these areas.

This species is essentially a dweller of the open ocean, not generally found inshore or in coastal waters, and tend to follow shelf contours in search of areas of plankton abundance.

Sei whales will take whatever is in abundance locally, whether it be fish (up to 30 cm long), squid or plankton, as long as it is shoaling (schooling). Sei whales obtain food by skimming through the water and catching prey in its baleen plates. An average sei whale can eat about 900 kgs of zooplankton (copepods, amphipods, euphausiids (aka krill)) and small fish a day.

Sei whale mating occurs during the winter months with sei whales in the Northern Hemisphere mating between November-February and between May-July in the Southern Hemisphere. Gestation lasts from 10 1/2 to 12 months. Females typically give birth to a single calf measuring 4.5 m in length. There are reports of rare multiple fetuses though. Calves nurse for 6-7 months on their mother’s milk. Young reach sexual maturity at 10 years of age, but do not reach full adult size until they are about 25 years old.

Females typically give birth every other year, but a recent increase in pregnancies has been noted.

Sei whales live to approximately 70 years and have an estimated current population of 65,000.

Sei whales were not traditionally targets for whalers because they lived in the same waters as blues, fins and humpback whales, which were the preferred quarry. However, when those whales became scarce and then protected, sei whales became the primary catch from the mid-1960s onwards. By the mid-1970s, sei whales were ‘fished out’ and the species earned protected status in 1979. The global population of these whales is estimated at only 57,000 to 65,000. The take of these animals peaked in the 1964-65 season, when 25,454 of these whales were killed. The reported global catch of sei whales in the 1978-79 season was only 150, showing the dramatic drop in the global sei whale population by that time. Some researchers have concluded that sei whale populations are rising as a result of decreases in blue and fin whale populations. However, this conclusion must be taken with caution, as actual data is scarce, and the dietary overlap between sei whales and these other species is not complete.

Sei whales are classified as Endangered (EN A1ad) on the IUCN Red List of Threatened Species: