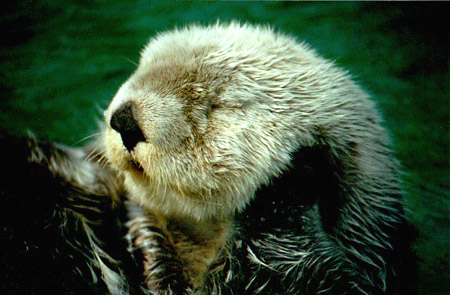 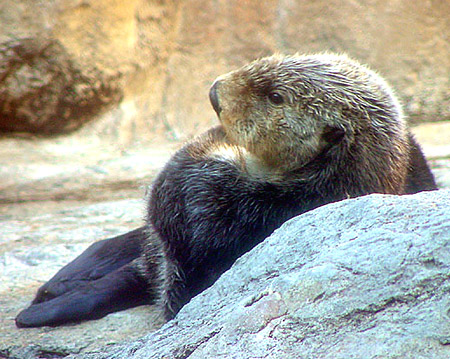 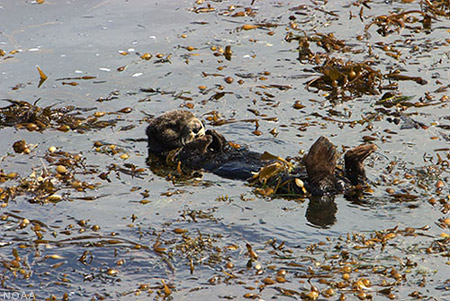 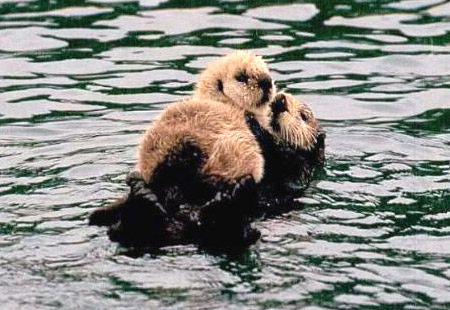 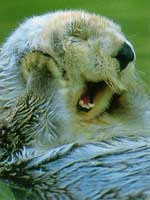 Sea otters, Enhydra lutris (Linnaeus, 1758), are the largest member of the Family Mustelidae (70 species of river otters, skunks, weasels, badgers, etc.) and are the smallest marine mammal in North America. Males weigh 22-45 kg and are 1.2-1.5 m in length. Females are slightly smaller, weighing 14-33 kg and measuring 1-1.4 m in length. The tail comprises less than a third of the body length.

The pelage (covering, or coat, of a mammal, whether of wool, fur, or hair) is brown or reddish brown. Sea otter fur is the densest of all mammals with 100,000-400,000 hairs/sq cm (that’s up to one million hairs per square inch!) whereas humans only have 20,000 hairs on their whole head!

Since sea otters do not have any insulating fat, the fur is responsible for maintaining warmth in waters typically 1-10°C. Most mammals fur sheds rain and water, and keeps them warm by trapping air in the underfur (like a down jacket). In the summer, a typical mammal sheds most of its underfur, like changing into a less heavy coat. That works wonderfully in the air, but it doesn’t work at all in water because temperature changes are usually much less. The sea otter’s fur keeps them warm also by trapping air in its coat, but the sea otter’s coat does not shed. They have two sets of hair: longer guard hairs and dense underfur. The guard hairs, when clean, are waterproof, protecting the underfur which traps a layer of air to provide insulation. The use of air as insulation is very efficient, providing four times the insulation of the same amount of fat or blubber. If the hairs are dirty or clogged with oil, then the sea otters coat won’t be waterproof and they die from the cold. You can see now why sea otters spend a large portion of time daily grooming themselves as they float on top of the water!

The hind legs are long and the paws are broad, flat, and webbed. The forelimbs are short and have retractable claws. Sea otters are the only carnivore with just 4 lower incisors. Females have two mammae.

Sea otters usually swim on their backs at the water’s surface using their rear flippers to move and their tails to steer. They are slow swimmers, about 9 kph under water. If sea otters are frightened they will flip over on their stomachs and swim away sometimes diving underwater to get away.

There are 3 known subspecies:

Sea otters, Enhydra lutris, rest in kelp forests, in groups called rafts. Often they will drape the kelp over their bodies like a blanket to keep from drifting away. They are found in coastal waters in the central and north Pacific Ocean. Past distribution of the sea otter included Hokkaido Island of Japan north through the Kuril Islands and eastern coast of Kamchatka, east through the Commander Islands and Aleutian archipelago, the southern coast of Alaska, and the west coast of North America to Baja, Mexico. Sea ice limits their northern range to below 57°N latitude, and the distribution of kelp forests limits the southern range to about 22°N latitude.

Sea otters are social, and tend to congregate in groups of gender, with pups and females in a group and males in another group. Females tend to stay away from males except when mating.

Sea otters can spend their whole life in the ocean but will rest on land when the population density is high. Swimming is performed using the hind limbs, tail, and vertical undulations of the body while the forelimbs are tucked into the chest. Sea otters are diurnal with crepuscular (twilight) peaks in foraging activity.

The sea otter, Enhydra lutris, has a very effective method for catching food. The sea otter gets ready to dive, and with a huge breath, leaps into the water. It swims to the bottom, and starts searching for food. A cormorant may follow the sea otter, and from the otters upturning of rocks, it can sometimes find a meal for itself. When a sea otter finds some food, like a shellfish, it will tuck it into loose skin folds in its armpits, which are used like shopping bags. This is all done very quickly, and the otter works hard. It will return to the surface to either eat or just to get a breath and dive again.

When it’s underwater, it can use its extremely sensitive whiskers (called vibrassae) to find a small crab or snail hiding in the seaweed or a crevice. It might also use its forepaws to reach into crevices for limpets or chitons that it cannot see. With its surprisingly strong paws, they can easily go through kelp beds in search of crabs or snails. These skills are also of great use when catching one of the sea otters’ favorite foods, abalone. This has angered commercial abalone divers and surprised biologists trying to figure out how the sea otter releases the creature from the stone. An abalone has two methods of defense, one is a hard and heavy shell, the other its ability to clamp down with tremendous force when disturbed. It has been estimated that the abalone can exert suction equal to about 4,000 times its own body weight. The abalone can be from 15-25 cm across and have up to a kilogram of meat inside. The sea otter uses a large stone to get the abalone off the rock. The sea otter would hold the stone in both paws, and hammer the side of the shell at the rate of 45 blows in 15 seconds! It may take two to three dives for abalone bashing, but the sea otter’s persistence eventually pays off. Sea otters are also good clam diggers, collecting many species, from the valuable Pismo clam to the smaller sand clams and razor clams. Clams don’t just sit there waiting to be picked up by some sea otter or recreational digger, they want to live, so consequently, the sea otter has to dig to get the clam. The clam can bury itself 10-50 cms under the sand.

When sea otters come to the surface they lie on their backs and use their stomachs as a table. Sometimes they use a tool, such as a rock, to help them open the hard shells of their prey. They bang the hard shell on the rock until it breaks open. This makes them the only tool-using marine mammal.

Sea otters must eat 25% of their body weight each day in order to stay alive. That means a 18 kg sea otter must eat 4.5 kg of food each day!

They will eat nearly any seafood they can find in their kelp forest foraging grounds.

From being an infant to being an adult, sea otters have an intense life cycle. The sea otter shows no outward appearance of pregnancy. The only slight indication is the small appetite the day before delivery. Delivery is a very quick process. The female otter will roll about in the water the same way she does when she is cleaning her tail, and on one roll, will come out of the water with a small, wet pup in her teeth. Pups are small, ranging from 1-3 kg. Typically, there is only one pup per pregnancy. On the rare occasion of twins, the mother can only raise one. Her food requirements are large, and so are the pups. The mother would have a hard time getting enough food for two additional mouths. Unlike the river otter, the sea otter mother is the pup’s cradle, protection, and home for the first months of its life. The mother would only have room for one pup.

Sea otters can reproduce year round. There are peaks of birth in May-June in the Aleutian Islands and in January-March in the California population. Delayed implantation produces varied gestation times. Pregnancy has been reported to be 4-12 months. Females usually give birth about once a year.

Two hundred years ago, a million sea otters may have ranged along the 9,650 km of Pacific coastline from northern Japan, through the Aleutian Islands of Alaska, down the coast of California to Baja Mexico. Because the pelts of sea otters are thick, warm and beautiful, fur hunters killed hundreds of thousands of them—until not a single sea otter was visible along the entire California coastline.

The southern sea otter was thought to be extinct. Then, in 1938, a raft of about 300 sea otters was discovered off the coast of Big Sur, California. This group has spread along the 322 km of California coastline, but its population is still small—only about 2,300.

Southern sea otters are now protected by the Endangered Species Act and the Marine Mammal Protection Act, so they cannot be hunted.

Now there are other threats to sea otters. Oil spills can be fatal to the sea otter. Oil coats the fur, destroying the blanket of air that keeps the animal warm. This causes chilling and death (hypothermia).

Increased pollution in our oceans is also a threat to sea otters. Fishing nets are another cause of sea otter deaths. Sea otters become caught in the nets and drown. Laws have been passed to limit the use of fishing nets along the coastline. This has helped some sea otter populations.

ENDANGERED (EN)
A taxon is Endangered when it is not Critically Endangered but is facing a very high risk of extinction in the wild in the near future, as defined by any of the criteria (A to E) as described here.