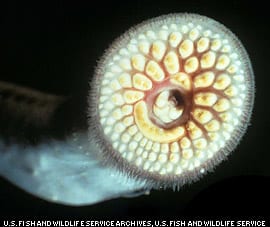 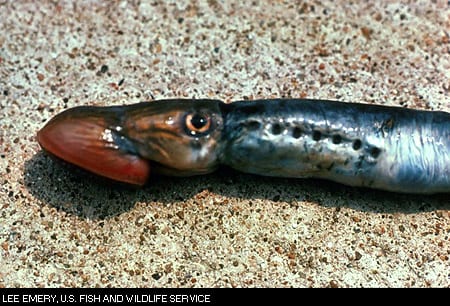 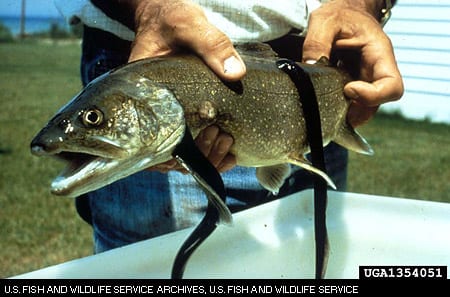 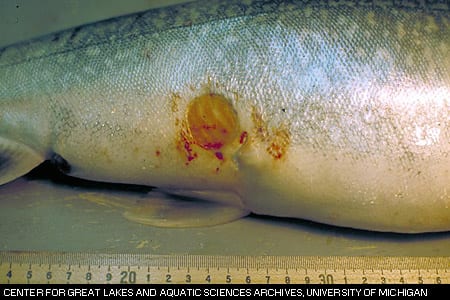 Sea lampreys, Petromyzon marinus (Linnaeus, 1758), aka great sea lampreys, lake lampreys, lampreys, or lamprey eels, have a distinctive eel-like body, but unlike the eel their skeletons are made of cartilage rather than bone. Sea lampreys grow up to 1.2 m in length, weighing up to 2.5 kg. They are easily identified by the wide oral disc (‘sucker’) in place of their mouth, which is filled with many small teeth arranged in circular rows. Their color varies from gray to blue black, graduating to a silver-white shade underneath. They have no paired fins, but possess single dorsal and ventral finfolds. The sea lamprey is scaleless and possesses a pair of functional eyes and seven gill openings.

Sea lampreys, Petromyzon marinus, are found only in the Mediterranean and North Atlantic, in the coastal seas off the North East USA, Nova Scotia, southern Greenland, the UK, Ireland and Scandinavia. They are also found in the Great Lakes and enters inland freshwater rivers and streams to breed. In their natural habitat, sea lampreys lives in the open ocean, migrating into freshwater to spawn. The larvae live in soft stream sediments.

Sea lampreys are parasites in their adult stage. They attack a wide range of salt- and freshwater fish, including herring, mackerel, salmon, trout and even some sharks, using its ‘sucker’ to attach to its host and rasp out a whole with its rough tongue. An anticoagulant in their saliva prevents the wounds from clotting. The host fish is often killed or seriously wounded. Under certain conditions, only one in every seven host fish will survive. The larval stage feeds using a mucus-secreting groove called an endostyle.

The sea lamprey, Petromyzon marinus, breeds in freshwater. During spawning, the lampreys stop eating, conserving all their energy for reproduction. The males and females align so that the cloacal openings are close together, but fertilization is external. Between 35,000 and 100,000 eggs are laid. The lampreys work in pairs, sometimes having the assistance of a second female, to dig out a nest (or ‘redd’) in the stony riverbed, usually about a meter in diameter and about 15 cm deep, where the eggs are deposited. After spawning, the adults die, as their intestines deteriorate and their bodies are attacked by fungus. The larvae have no teeth and are blind. They bare little resemblance to the adult stage, with mouths and fins of different appearance. This stage lasts for three to four years, before they undergo transformation into adults.

The sea lamprey, Petromyzon marinus, was introduced as an alien species to the North American Great Lakes in 1929 with the opening of the Welland Canal. It spread throughout the lakes, having a devastating effect on the populations of many fish, including lake trout. Since then, the invasive lamprey population has been brought under control. 3-trifluoromethyl-4-nitrophenol (TFM) is added to water to kill larval lampreys, though it also causes localized fish and amphibian kills. The use of electrical barriers has in the past prevented sea lampreys from reaching spawning areas, though this method has since been abandoned in favor of chemical treatments. In 1986, barriers were developed and put in place that prevented lampreys from reaching spawning areas, but allowed other fish to pass through safely. Recently, there has been concern amongst amongst biologists that sea lampreys might develop a resistance to TFM or an ability to spawn at stream mouths, presenting further challenges for their management. Currently, the sea lamprey is not vulnerable or threatened in its natural habitat.