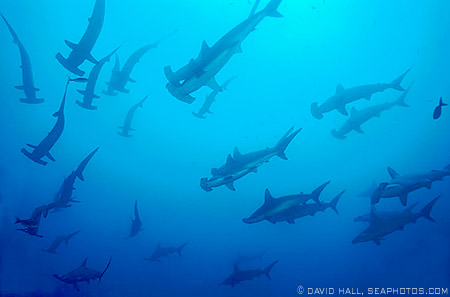 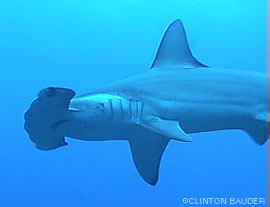 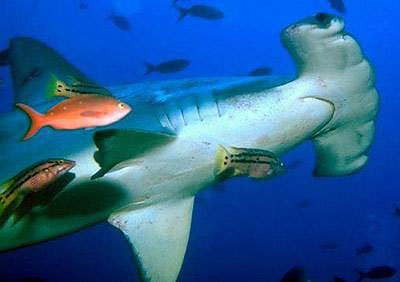 Scalloped hammerhead sharks, Sphyrna lewini (Griffith and Smith, 1834), are large hammerhead sharks with moderately high first dorsal fins and low second dorsal and pelvic fins. They can be distinguished by the broadly-arched front margin of their head that has a prominent median notch (see the ID photos on the great hammerhead page for a comparison between the great, scalloped hammerhead and bonnethead sharks). The side “wings” of their heads are narrow with their rear margins swept backward. Scalloped hammerheads are uniformly gray, gray-brown, or olive on their dorsal (upper) surfaces, fading to white on their ventral (lower) surfaces and their pectoral fins are tipped with gray or black ventrally. Most sharks encountered by divers average 2-2.5 m in length. Males mature at 1.5-1.75 m and reach an average of 3 m, females mature at about 2 m. Maximum length of this species is known to be at least 3.7 m, and it is thought that a few individuals may reach a length of over 4 m.

Scalloped hammerheads, Sphyrna lewini, feed mainly on teleost (bony) fishes and cephalopods (squid, octopus, and cuttlefishes), also lobsters, shrimps, crabs, as well as other sharks and rays. In the Indo-West Pacific, stomach contents have been found to include sea snakes.

Scalloped hammerheads are viviparous, with a yolk-sac placenta. Pups are born following a 12 month gestation. Produces 15-31 pups, of 43-55 cm young in a litter. Pups occupy shallow coastal nursery grounds, often heavily exploited by inshore fisheries, and then migrate offshore as they mature.

Scalloped hammerhead sharks are considered potentially dangerous to people but are usually non-aggressive and shy when approached by divers. Under baited conditions scalloped hammerheads may make close approaches to divers but quickly lose interest and depart when they determine that the divers are not the source of the food odors.

Readily available to inshore small commercial fisheries as well as to offshore operations. Sold fresh, dried-salted, smoked and frozen; also sought for its fins and hides. Oil used for vitamins and carcasses for fishmeal. Lack of data on population trends makes it difficult to assess whether the high level of catches of this species at all life stages is having an effect on stocks, but some declines are reported (see the IUCN link below for the latest data).

The scalloped hammerhead shark is listed as Critically Endangered (A2bd) on the IUCN Red List of Threatened Species:

David Hall’s Encounters in the Sea