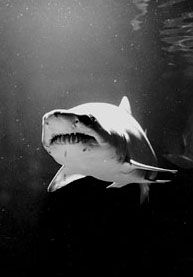 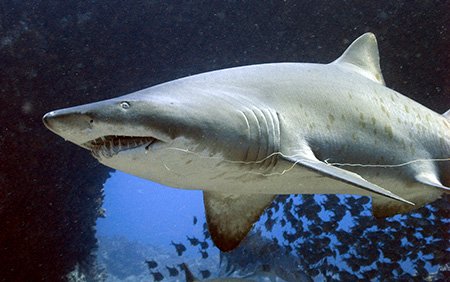 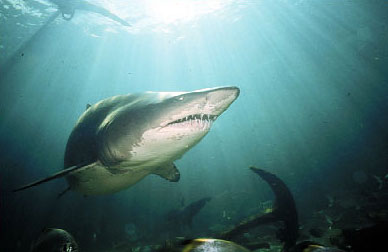 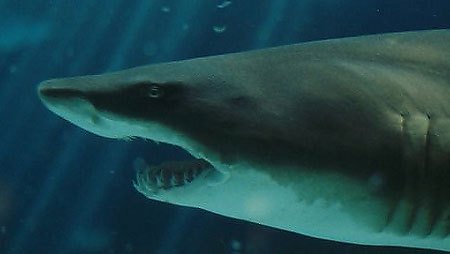 Sand tiger sharks, Carcharias taurus (Rafinesque, 1810), are known commonly as sandtigers, sand sharks, grey nurse sharks (Australia), ground sharks, and spotted raggedtooth sharks (South Africa), and they are also known scientifically with the synonyms: Odontaspis taurus, Eugomphodus taurus and Carcharias arenarius. These large impressive sharks have short, pointed snouts, small eyes, protruding spike-like teeth and small, equally-sized dorsal and anal fins with the first dorsal fin closer to the pelvic than to the pectoral fins. The caudal fin (tail fin) has a pronounced subterminal notch and short ventral lobe. Their coloring is pale brown or gray on the dorsal side, paler on the ventral side with dark spots that fade in adults. Maximum recorded size is 3.2 m; maximum weight: 159 kg. The sand tiger shark is the only known shark that stores air in its stomach to maintain neutral buoyancy.

Sand tiger sharks, Carcharias taurus, are found in all warm seas except perhaps the eastern Pacific. Indo-West Pacific: Red Sea and off South Africa to Japan, Korea and Australia. Present in the Arafura Sea. Western Atlantic: Gulf of Maine to Argentina. Has been seen in Bermuda and south Brazil. Eastern Atlantic: Mediterranean to Cameroon. A migratory species in parts of its range, particularly in its northern and southern extremities where poleward migration occurs in the summer and equatorial migration in autumn and winter. Although the species is widespread, regional populations are isolated. Depth range 0-191 m, subtropical; 45°N-48°S.

This large coastal species of shark has one of the lowest reproductive rates known among elasmobranchs, giving birth to one or two large young every two years. As a result, annual rates of population increase and ability to sustain fishing pressure are very low. Sand tiger sharks are ovoviviparous with distinct pairing with embrace. Reproduction features ovophagy or uterine cannibalism. Eggs leave the ovaries, and while in transit in the oviducts are fertilized and enclosed in groups of 16-23 in egg cases. However, at some time between fertilization and birth only two embryos of its group prevails, possibly by devouring its rivals, and proceeds to eat fertilized eggs and smaller potential siblings in utero until birth. Evidently this species sends forth into the world not only large, well-developed, and even experienced young but young with full stomachs. The yolk sac is resorbed at a small size, less than 17 cm, and the umbilical scar may be lost. Gestation period may be from 8-9 months long. Size at birth 100 cm in length.

Catch rates of well-studied populations of sand tiger sharks in Australia and South Africa have shown declines as a result of commercial fishing, spearfishing and beach meshing, requiring the introduction of management. Despite protection in Australia, population recovery is very slow. This species is not usually aggressive toward humans unless provoked but in rare cases bites to swimmers have occurred and aggression towards divers carrying speared fish has also been reported. Utilized for fresh, frozen, smoked and dried for human consumption; also for fishmeal, liver oil, fins, and hides for leather.

The sand tiger shark is listed as Vulnerable (VU A2ab+3d) on the IUCN Red List of Threatened Species:

VULNERABLE (VU) – A taxon is Vulnerable when the best available evidence indicates that it meets any of the criteria A to E for Vulnerable (see Section V), and it is therefore considered to be facing a high risk of extinction in the wild.