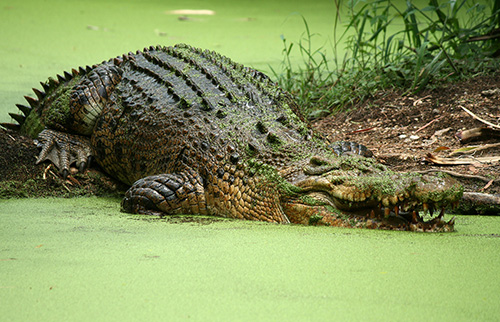 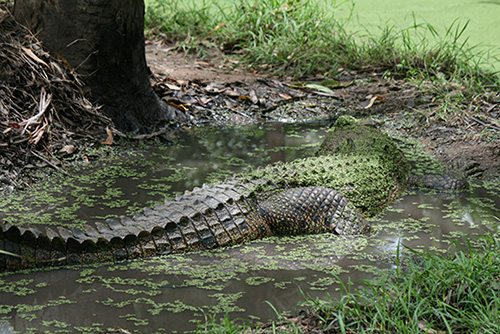 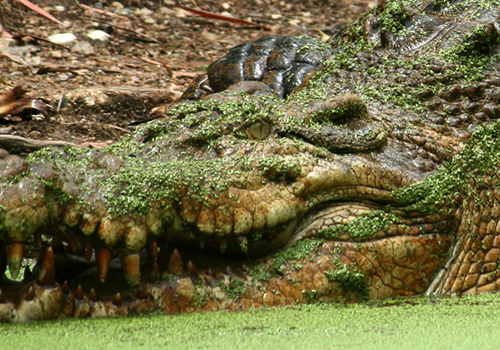 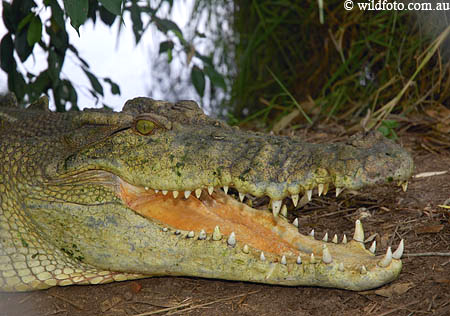 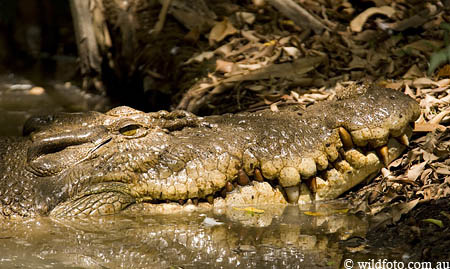 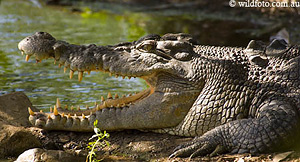 Saltwater crocodiles, Crocodylus porosus (Schneider, 1801), aka salties or saltwater crocs, are the largest living reptiles. Adult males can reach 6-7 m and weigh between 1,000-1,200 kg. Females are much smaller and do not generally exceed 3 m. The head is quite large and features a pair of ridges that run from the eyes along the center of the snout. The scales are oval and the scutes (bony plates) are small compared to other species. Young saltwater crocodiles are pale yellow with black stripes and spots found on the body and tail. Adults are darker with light tan to gray areas. The ventral surface is white or yellow in color, and stripes are present on the lower sides of the body but do not extend to the belly. The tail is gray with dark bands. The saltwater crocodile has a heavy set jaw with between 64-68 teeth.

Saltwater crocodiles are considered very intelligent and sophisticated animals. They communicate by barks and are thought to display four different calls, including a high-pitched distress call performed by juveniles in a series of short barks. Threat calls consist of a hissing sound made at intruders. The hatching call is performed by newborns as a high-pitched short bark, and finally, the courtship bellow is heard as a long, low growl.

Saltwater crocodiles use thermoregulation to maintain body temperatures. They cool themselves in water and warm themselves in the sun.

Crocodylus porosus is most commonly found on the coasts of northern Australia, and on the islands of New Guinea and Indonesia. It ranges as far west as Sri Lanka and eastern India, along the shorelines and river mouths of southeast Asia to central Vietnam, around Borneo and into the Philippines and in Palau, Vanuatu and the Solomon Islands. Saltwater crocodiles are strong swimmers and are sometimes found in open water very far from land.

Saltwater crocodiles tolerate salinity and are found mostly in coastal waters or near rivers. They are also found in freshwater near rivers and swamps. Juveniles are raised in freshwater rivers during the wet season between November and March, however they are often forced out of these areas by dominant males using them for breeding grounds. 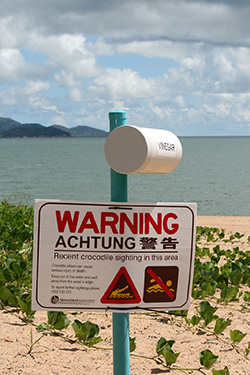 Saltwater crocodiles have a variety of prey. Juveniles are restricted to small insects, amphibians, reptiles, crustaceans, and small fish. Adults feed on crabs, turtles, snakes, birds, buffalo, wild boar, and monkeys. Saltwater crocodiles hide in the water exposing only their eyes and nose. They lunge at prey, often killing it with a single snap of the jaws, then drag the prey under water where it is more easily consumed.

The females lay between 40-60 eggs on average, but can lay as many as 90 at one time. She places her eggs and buries them in nests of vegetation and mud which are elevated to avoid loss from flooding during the rainy season. Females protect their nests until the eggs are hatched in 90 days depending on nest temperature.

Sex is determined by nest temperature—males are produced around 31.6° C. Any deviation from that temperature will result in a female hatchling.

Once the The female hears the newborn call, she digs up the nest and carries her offspring back to the water in her mouth watching them until they learn to swim.

Saltwater crocodile leather is in high demand, and crocodile farms are establish to raise crocodiles solely for their hides. Like other animal skin and fur trades, this practice is highly controversial among those concerned with animal welfare.

Saltwater crocodiles are not yet officially threatened, however in many countries populations have declined significantly.