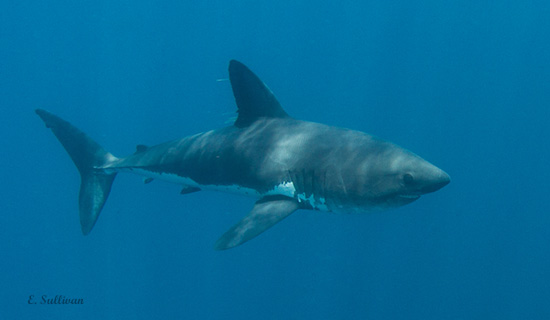 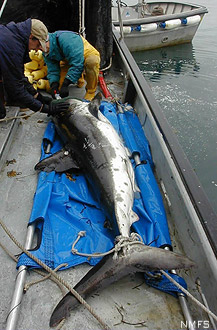 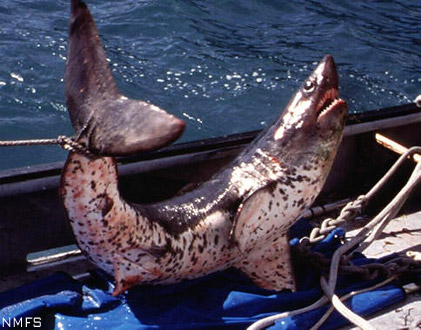 Salmon sharks, Lamna ditropis (Hubbs and Follett, 1947), are closely related to porbeagle sharks, Lamna nasus. Salmon sharks measure up to 3.7 m in length and weigh a maximum of 454 kg. They have heavy spindle-shaped bodies with short, blunt, conical snouts and large gill slits relative to their body size. Their first dorsal fin is dark in color. Their dorsal (upper) sides and flanks are dark blue to gray or black in color. Their ventral (under) sides are white with darker blotches or spots.

Salmon sharks have been observed both singly and in schools, usually feeding. This species is a very fast swimmer.

In the eastern North Pacific, female salmon sharks live up to 20 years, males to at least 27 years.

Lamnids have vascular counter-current heat exchangers or retes (retia mirabilia) that enable them to retain the heat produced by their metabolism. Salmon sharks have retes near their eyes, in their muscles used for locomotion, and in their viscera (body cavity organs). They also regulate their temperature with vascular shunts that enable them to alter the route of blood flow.

The ability to control body temperature allows Lamnids, and other endothermic species, to increase their vertical range in the water column and move through varying water temperatures in search of prey.

Salmon sharks, Lamna ditropis, are found in the North Pacific near Japan, Korea, and the Sea of Okhotsk to the Bering Sea and southward to southern California, USA and Baja California, Mexico.

Salmon sharks are coastal-littoral and epipelagic sharks that inhabit cool temperate waters (2.5°-24°C) down to at least 152 m.

Similar to other pelagic elasmobranch species, the migratory range of salmon sharks is wide, and are likely associated with the migratory patterns of their prey fishes.

Salmon sharks are ovoviviparous. Litters of 2-5 pups are born after a gestation period of about 9 months. Newborns measure about 84-96 cm in length.

Salmon sharks mate during summer and autumn and give birth in the spring. Like other shark species, the male shark grasps the female by biting her while he inserts a clasper into her cloaca.

Salmon sharks, Lamna ditropis, are potentially dangerous to humans due to their size, but have not been associated with injuries to humans.

This species is commonly caught as bycatch, and is considered a nuisance by salmon fisheries because of the damage salmon sharks apparently cause to fishing gear.

Juvenile salmon sharks have been discovered stranded along the Pacific coast of the US, the cause for which is unknown but thought to be associated with coastal development or more likely, commerical fishing.

Salmon sharks, Lamna ditropis, are now listed as Least Concern on the IUCN Red List of Threatened Species due to:

“The Salmon Shark occurs in the eastern and western North Pacific and its population appears to be stable and at relatively high levels of abundance. Currently there is no directed fishery in the Northeast Pacific, apart from a small sport fishery for the species in Alaska. Bycatch in the Northeast and Eastern Central Pacific appears to be at low levels and is not increasing at this point-in-time. Additionally, with the current ban on commercial fishing in Alaska state waters and fairly conservative sport fishing limits, it appears that the population is stable. In the Northwest Pacific, a small directed fishery still exists, but typically takes no more than ~5,000 animals per year. Bycatch in the Eastern and Western Central Pacific has been significantly reduced since the elimination of the drift gillnet fishery and the population appears to have rebounded to its former levels. In addition, the most recent demographic analysis supports the contention that salmon shark populations in the Northeast and Northwest Pacific are stable at this time and it is assessed as Least Concern. Nevertheless, there are very little data on catch in other fisheries, discards and potential finning from the major pelagic fisheries in the North Pacific. Bycatch in U.S. State and Federal waters should be documented in order to foster responsible management and catch records should be obtained from the Northwest and Central Pacific.”

LEAST CONCERN (LC)
A taxon is Least Concern when it has been evaluated against the criteria and does not qualify for Critically Endangered, Endangered, Vulnerable or Near Threatened. Widespread and abundant taxa are included in this category.