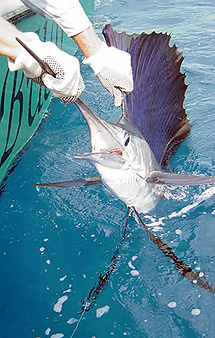 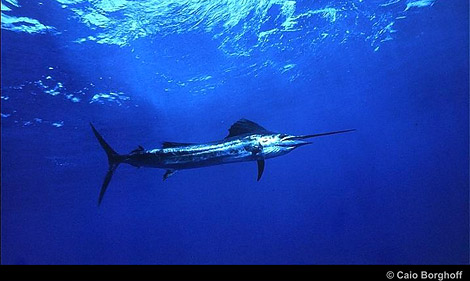 First described as a species in 1792, Atlantic sailfishes’ scientific name is Istiophorus albicans (Latreille, 1804). The only other sailfishes are the Pacific or Indo-Pacific sailfishes, Istiophorus platypterus (Shaw, 1792); though some scientists disagree on whether the two are in fact different species.

Atlantic sailfishes, aka billfishes, ocean gars, ocean guards, and sailfishes, are one of the smaller members of the billfishes or Istiophoridae family, with a maximum size of about 3.15 to 3.40 m in length and a weight of 100 kg. Females are generally larger than males. Distinguishing features include a bill-shaped upper jaw which is circular in cross-section and about twice the length of their lower jaw.


Atlantic sailfishes’ habitat varies according to water temperature and in some cases wind conditions. At the northern and southern extremes of their distribution, Atlantic sailfish appear only during the warmer months. These seasonal changes in distribution may be linked to prey migrations. Usually found in the warmer, upper layers above the thermocline, the species often migrates into nearshore waters, preferring temperatures between 21° to 28°C, but is also capable of descending into rather deep water. In general, Atlantic sailfishes are highly migratory and can be found from approximately 40°N to 40°S in the western Atlantic Ocean and from 50°N to 32°S in the eastern Atlantic Ocean. There is a known aggregation that occurs off the coast of West Africa. Although few records exist for the Mediterranean Sea, several juvenile specimens have been caught there. In the western Atlantic Ocean, its highest abundance is in the Gulf of Mexico, the Caribbean Sea, and the Atlantic coast of Florida, where it is the official state saltwater fish.

Atlantic sailfishes prey mainly on small pelagic fishes — particularly mackerels, tunas, jacks, halfbeaks, and needlefish — but also eats cephalopods such as squid and octopuses. Some feeding occurs at the surface, as well as in midwater, along reef edges, or along the sea floor.

Spawning may begin as early as April, but occurs primarily during the summer months. (The exception is the eastern Atlantic, where spawning can occur year-round.) Spawning in offshore waters beyond 100 fathoms has been reported from south of Cuba to the Carolinas. However, off southeast Florida, Atlantic sailfish move inshore to shallower waters to spawn near the surface in the warm season, with females swimming sluggishly with their dorsal fins above the water’s surface, accompanied by one or more males. Fertilization is external. A 33-kilogram female may shed up to 4.8 million eggs in three batches during a single spawning. Atlantic sailfish larvae are approximately 0.3 cm at hatching, and they lack the elongated jaw characteristic of adult sailfish, which only begins to develop at about 0.6 cm. At 20 cm, all larval characteristics have disappeared and the juvenile has all the features of an adult.

In the Atlantic, sailfish have little value as a commercial fish, since their meat is relatively tough. However, sailfish are highly sought after by recreational fishermen. Popular fishing locations include Bermuda, Puerto Rico, Windward Islands, and the Gulf of Mexico. A total of 34 parasitic species have been recorded from the Atlantic Ocean and Pacific Ocean range of sailfish. Parasites include protozoans, digenea (flukes), didymozoidea (tissue flukes), monogenea (gillworms), cestoda (tapeworms), nematoda (roundworms), acanthocephala (spiny-headed worms), copepods, barnacles, and isopods.