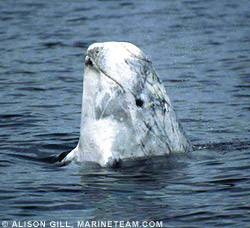 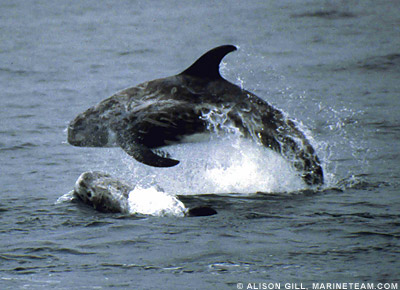 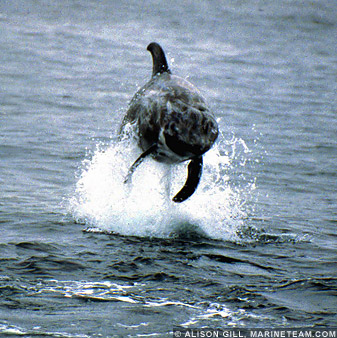 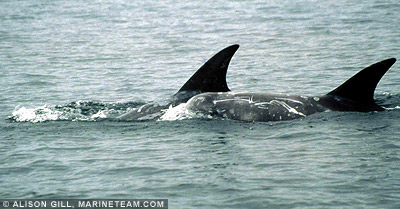 Risso’s dolphins, Grampus griseus (G. Cuvier, 1812), aka Grampus, are rather large cetaceans with rounded heads, similar in shape to pilot whales. They have a characteristic crease in their melons (the organ in the front of the head used for echolocation) visible from the forehead to the mouth. They have 7 or fewer pairs of teeth located in the front of their lower jaws.

Adult Risso’s dolphins are a dark gray with a white underside that becomes whiter with age as the heavy crisscrossed scars that cover their bodies increase. These scars likely result from from encounters with other Risso’s dolphins and their primary prey, squid. Circular white scars have also been noted resulting from bites of lampreys, cephalopods and cookiecutter sharks, and some from infestations of parasites or bacterial infections. Juveniles are light gray, which darkens as they age to a brown-gray. Like pilot whales, Risso’s dolphins have a white anchor-shaped patch on the ventral side. This species has a tall, curved dorsal fin that tends to be more erect in males and long flippers. The flukes are broad and curved with a deep notch and the tailstock is slender.

Risso’s dolphins are a gregarious species that form groups of between 3-30 individuals on average, however they have been known to form massive schools of thousands of dolphins. Recent studies indicate stability among groups, and it is thought that members may be genetically related. Risso’s dolphins also travel with other dolphin species, and hybrids between Risso’s and bottlenose dolphins have been recorded in the wild and in captivity.

They are an agile species that perform leaps and fluke and flipper slapping. The lifespan is estimated at 20-40 years.

Risso’s dolphins, Grampus griseus, are found in offshore temperate and tropical waters worldwide. The northernmost range of their habitat is Newfoundland and the Shetlands in the Atlantic, and the Gulf of Alaska in the Pacific. The southern ranges are Cape Horn, the Cape of Good Hope, Australia and New Zealand. It is not known whether this is a migratory species, however they may move to cooler waters during warmer months and travel to follow prey movement.
https://www.youtube.com/watch?v=Sn-qOL7x5L8

Risso’s dolphins, Grampus griseus, feed primarily on squid and are also known to feed on a variety of fish.

Risso’s dolphins, Grampus griseus, are thought to reach sexual maturity when they reach between 2.6-2.8 m in length in both sexes. Little is known about the reproductive habits of this species, however Risso’s dolphins in the North Atlantic have been observed calving during summer months. Calves measure about 1.2-1.5 m in length at birth.

It is thought that Risso’s dolphins, Grampus griseus, are abundant throughout their range, but population data are unavailable. Off the coast of California where Risso’s dolphins are commonly sighted, a population of between 13,000-30,000 is estimated. These dolphins are killed for human consumption in some areas and have been sold on the open market in Taiwan. They are also caught in Japan, and in Sri Lanka where their commercial popularity increased when fisheries began selling their incidentally caught dolphins.

Getting trapped as bycatch, entanglement, and pollution from coastal development pose the greatest threats to Risso’s dolphins.