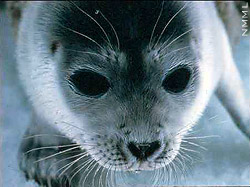 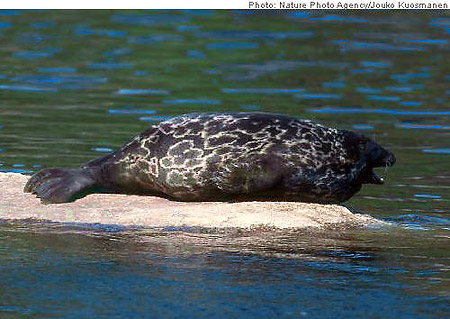 Ringed seals, Pusa hispida (Schreber, 1775), are named for the ring-shaped marks on their coats as adults. This seal has 5 subspecies: Arctic, Baltic, Lagoda, Okhotsk, and Saimaa ringed seals. The measurements of these subspecies vary greatly. The Arctic and Okhotsk ringed seals measure 1.1-1.5 m in length and weigh 50-70 kg, males are slightly larger than females. These 2 subspecies can live up to 43 years of age.

Adult Saimaa ringed seals measure up to 1.5 m in length and weigh 45-100 kg. This subspecies is a solitary animal found hauled out along shorelines alone or in pairs. There is a great variety in coloration among Saimaa ringed seals, but most are dark gray-black.

Ringed seals, Pusa hispida, are the most common seal in the Arctic, found on firm ice along Pacific Japanese coasts, the northern parts of the Baltic Sea, Canada, Alaska, and Siberia.

The most numerous subspecies are the Arctic ringed seals, P. h. hispida, found in all Arctic Ocean seas and in the Bering Sea, ranging as far south as Newfoundland and northern Norway. Estimates of the Arctic ringed seal population are difficult due to this species wide distribution, however rough estimates put the population between 2-7 million seals.

There are approximately 800,000-1,000,000 Okhotsk ringed seals, P.h. ochotensis, found in the Okhotsk Sea and northern Japan. Baltic ringed seals, P.h. botnica, are estimated at about 5,500 found in the northern and central Baltic Sea, mostly in the Bothnian Bay. These seals are usually found in small groups during the molting season hauled out on rocks in the Gulf of Riga and the Gulf of Finland from May to November. During the winter however the seals are found alone, spread out in the ice fields, and are often aggressive to other individuals. Ringed seals are also found alone, rather than in groups, during the ice-free period in the Bothnian Bay. Approximately 2,000 Ladoga ringed seals, P.h. hispida, are found in Lake Ladoga in western Russia. In the summer Lagoda ringed seals are found concentrated in small areas in the northern part of the lake. Saimaa ringed seals, P.h. saimensis, are the least abundant subspecies with only 220-250 seals remaining in Lake Saimaa in eastern Finland. Lake Saimaa contains distinct water areas connected by narrow sounds making it possible that the Saimaa ringed seal population is divided into two or more sub-populations.

During colder months when the cracks in the ice begin to freeze, ringed seals create breathing holes with their strong claws which they maintain throughout winter in ice up to 2 m thick. Arctic ringed seals dig caves in the snow above the breathing holes forming multi-chambered lairs for protection from extreme cold and polar bear predation. These seals will typically maintain 2 or more lairs simultaneously up to 4.5 km apart.

Some ringed seals migrate on a seasonal basis in response to ice availability and there is evidence of long-distance migration and dispersion, particularly for juvenile ringed seals.

The female ringed seal reaches sexual maturity at about 6 years of age and generally bears 1 pup each year. Mating occurs in late April and early May. Males are likely polygynous and establish underwater territories. Although mating occurs in May, the embryo does not implant in the womb until August or September. The gestation period is approximately 240 days after which ringed seals are born on solid ice where they are vulnerable to predators such as bears, foxes, and humans. Because of the risk of predators, ringed seal pups learn to dive when they are very young.

Arctic and Okhotsk ringed seals pups are born measuring 60-65 cm in length and weighing 4.5-5.5 kg. Females reach sexual maturity at 4-8 years, males at 5-7 years. Reproductive behavior of these subspecies varies between regions, however ringed seals generally remain on drifting pack ice or shorefast ice to rest, pup, and molt. Most ringed seals, with the exception of the Okhotsk, breed and give birth in lairs formed in caves dug into the snow on top of the ice.

Pups are generally born in mid-March to mid-April with a white coat that will be shed within 4-6 weeks for a silver coat with dark gray coloring on the dorsal side. They are nursed for 5-7 weeks during which time the mothers only feed occasionally and consequently lose a lot of their blubber. Ringed seals also lose weight during molting season as they do not feed during this time.

Baltic ringed seal females reach sexual maturity at 3-6 years, earlier than males. Their pups are born in lairs on the pack ice in late February to early March, followed by molting season from mid-April to early May.

Ladoga ringed seal females reach sexually maturity at 4-5 years, males at 6-7. Their pups are born measuring 50-60 cm in length and weighing 4-5 kg. The breeding behavior of the Ladoga ringed seal is not well known, however like the other subspecies, it is thought that pupping season occurs from March-April. The birth lairs of the Ladoga ringed seal are usually 40-60 km from the shore near hummocked or ridged ice. In northern areas of the lake, however, they are also found in snowdrifts along the shoreline. The pups are normally born with white coats, although some dark pups have recently been observed. Nursing is thought to last 1.5-2 months and that mating takes place during early lactation.

Saimaa ringed seal females are though to reach sexual maturity at 4-5 years, males 5-6 years. Only about 50 Saimaa ringed seal pups are born each season, about half of which die before reaching sexual maturity. Reproductive behavior of Saimaa ringed seals is not well known. Females appear to give birth from late February to early March in lairs on the ice built in the snow close to the shore of small islands and islets in late December. Pups are born with gray coats and nursed for 7-9 weeks. Adult ringed seals do not migrate and remain near the same lairs year-round, often on the same shoreline or even the same rock. Molting takes place on land in late May-early June.

Ringed seals, Pusa hispida, have long provided a source of food for man, dogs, foxes, and polar bears in the Arctic region. The ringed seal is also hunted by the Inuit for fuel and clothing. Newly-molted ringed seal pups are killed by Canadian fur traders for their pelts.

Pusa hispida is a very common species with no measures to protect it other than the fact that its habitat is the same as that of the polar bear, which is now protected.

Ringed seals are an important subsistence prey for native hunters throughout their range. The annual kill in Alaska was recorded at about 3,000 seals, between 50,000-70,000 have been killed annually in Canada and Greenland, and 7,300 were commercially hunted in Russia in 1988.

There are reports of increased commercial hunting of ringed seals in Canada for export to Asia. Seal skins, meat, organs, bones, and oil may be marketed for dietary supplements and food products. There are also reports that the Inuit Tapirisat of Canada and the Nunavut government would like to reverse the U.S. Marine Mammal Protection Act banning the export of seal skins from Canada. Increased hunting may have an affect on the viability of local populations.

Ringed seals are also at-risk of climate change as the ice distribution changes. Additionally, environmental contamination even in the northern range have been reported. In Russia in 1998, radioactive waste was reported to be leaking into the Arctic seas resulting in radiation 100 times normal levels in some places. The radioactive waste comes from Arctic dumps used by the Soviet Union in the 1960s. In the Baltic Sea, toxic chemicals and metals have caused disease and reduced reproductive capacity in ringed seals. Although measures have been taken to reduce pollution levels, ringed seal populations are still threatened by environmental contamination.

Baltic ringed seal populations have decreased due to hunting and pollution. Hunting Baltic ringed seals was banned in 1988 by the Helsinki Commission, however Finland and Sweden are pushing for a reversal of the ban. Scientific research published in 1997 showed that this species could not sustain hunting at any level. Baltic ringed seal populations are just beginning to increase, however, there is concern for the viability of the Gulf of Finland population. In 1998, it was reported that chemical weapons dumps in the Baltic Sea were causing widespread heavy metal and arsenic contamination.

The Baltic ringed seal is listed as Vulnerable on the IUCN Red List and as an Appendix III species under the Bern Convention. This subspecies is protected by various countries within its range.

Ladoga ringed seals were hunted extensively until a ban in 1980, however illegal hunting by fishermen still occurs. Between 200-400 Lagoda ringed seals die each year due to entanglement. Recent studies have shown increased pollution caused by development around the lake, which poses a serious threat to Lagoda ringed seals. High levels of mercury have been found in seals as well as high levels of toxic chemicals in the water. An additional threat to the population is caused by disturbance each summer due to increased recreational activity near haulout sites. Increased marine traffic is also a concern, two large fuel spills occurred in 1997. The Ladoga ringed seal is listed as Vulnerable on the IUCN Red List and as an Appendix II species under the Bern Convention. The species is also included in the Russian Red Data Book.

Saimaa ringed seals were intensively hunted and eliminated from some parts of the lake by fishermen. The Saimaa ringed seal was protected by Finnish law in 1955, however its numbers continue to decline. This seal also has a high pup mortality rate possibly caused by mercury pollution. To save this species from extinction, seal sanctuaries were established in 1982. Currently the seals’ range is covered by two national parks and a national shoreline conservation program is being planned to establish protection for 6-8 of the breeding areas by the year 2006. Metsähallitus (the Finnish Forest and Park Service), the agency that is responsible for the monitoring and protection of the subspecies, is aiming to raise the Saimaa ringed seal population to a minimum of 400 by the year 2025. The population is growing at about 2% per year. In spite of these protective measures, the most serious threat to the Saimaa ringed seal is subsistence fishing causing mortality due to entanglement and drowning in fishing nets and traps. Fishing around the main breeding sites is forbidden from 15 April to 30 June in a 325 sq km area that covers approximately 50% of birth lair locations. Coastal development, snowmobile traffic, and recreation around the lake are also a problem. There have also been problems with Saimaa ringed seal birth lairs collapsing due to changes in the water level in winter increasing pup mortality and lowered weight of weaned pups. These changes in the water level were caused by a hydro-electric plant, however lowering the lake’s levels is now forbidden during the period of permanent ice cover. The Saimaa ringed seal is listed as Endangered on the IUCN Red List and as an Appendix II species under the Bern Convention.