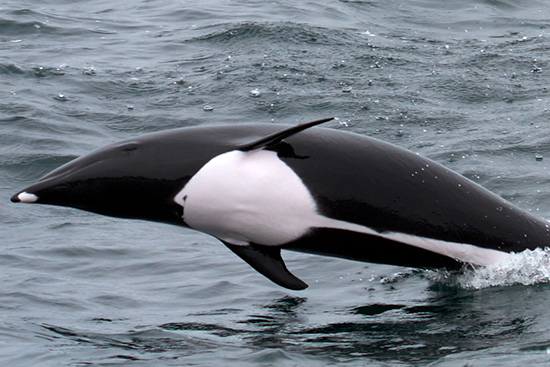 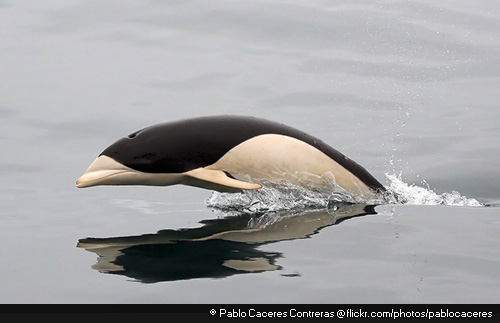 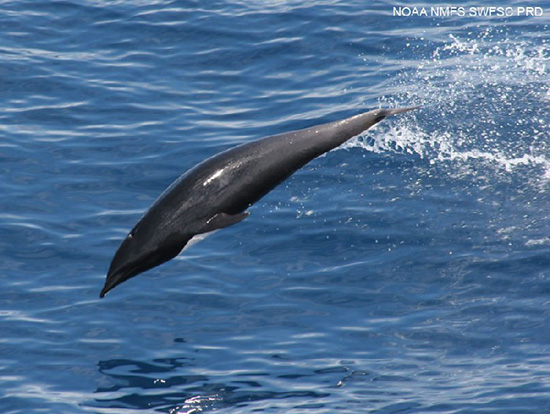 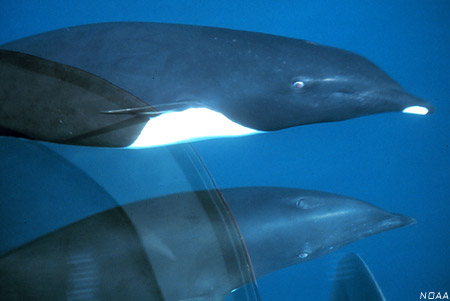 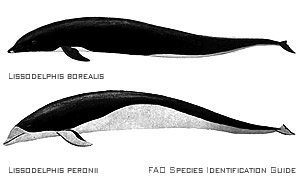 Lissodelphis borealis adults are usually black in color with a white band on their ventral (under) sides. The trailing edges of their flukes (tail fins) have light gray edging above with white below. They have 37-54 pairs of sharp, slender teeth in each jaw. Males are slightly larger than females measured up to 2.3 m in females and 3.1 m in males. Their maximum known weight is 115 kg.

Lissodelphis peronii adults are usually white on their ventral (under) sides which extends well up their flanks; the sharp line demarcating black above and white below runs from their tail forward, dips down to their flippers and then sweeps back up to cross their melon (head) between their blowhole and snout. Their flippers are generally white, but their trailing edge has a black band. Their flukes are white below and dark gray, fading to white on their leading edges on top. They have 44-49 sharp, pointed teeth in each jaw. These dolphins reach lengths of at least 3 m and weigh up to 116 kg.

Like other dolphin species, right whale dolphins are a gregarious species found in schools of 200-2,000 that communicate using clicks and whistles and are often found in V-shaped configurations. They are fast and agile swimmers that reach speeds of up to 40 kph and have been observed breaching and displaying their flukes. They often school with other cetaceans such as Pacific white-sided dolphins. Southern right whale dolphins are often found with other marine mammal species, especially dusky dolphins and pilot whales.

Northern right whale dolphins, Lissodelphis borealis, are found in the northern Pacific Ocean between 35°N-51°N latitude. They live in deep open water where the temperatures vary between 8-24°C.

Southern right whale dolphins are found only in cool temperate to subantarctic waters of the Southern Hemisphere. Their southern limit appears generally to be bounded by the Antarctic Convergence. Their range extends furthest north along the west coast of continents, due to the cold counterclockwise currents of the Southern Hemisphere. The northernmost record is at 12°S in northern Peru. This is also an open-ocean species, coming close to shore only in deep water coastal areas.

Almost nothing is known of either species’ reproductive biology. There appears to be a calving peak in winter to early spring. Length at birth is unknown, but is thought to be approximately 1 m. Young animals have muted color patterns of dark gray and light gray.

Northern right whale dolphins, Lissodelphis borealis, have often been caught by the North Pacific squid driftnet fisheries in Japan, Korea and Taiwan. Between 1985 and 1990 an estimated 15,000-20,000 dolphins were taken per year depleting populations by up to 73 percent. Although occasionally taken by whalers in the 1800s for food, southern right whale dolphins do not appear to be heavily hunted. They are known to be taken incidentally in driftnets along the coasts of Peru and Chile, and some are taken in the Peruvian small cetacean fishery.